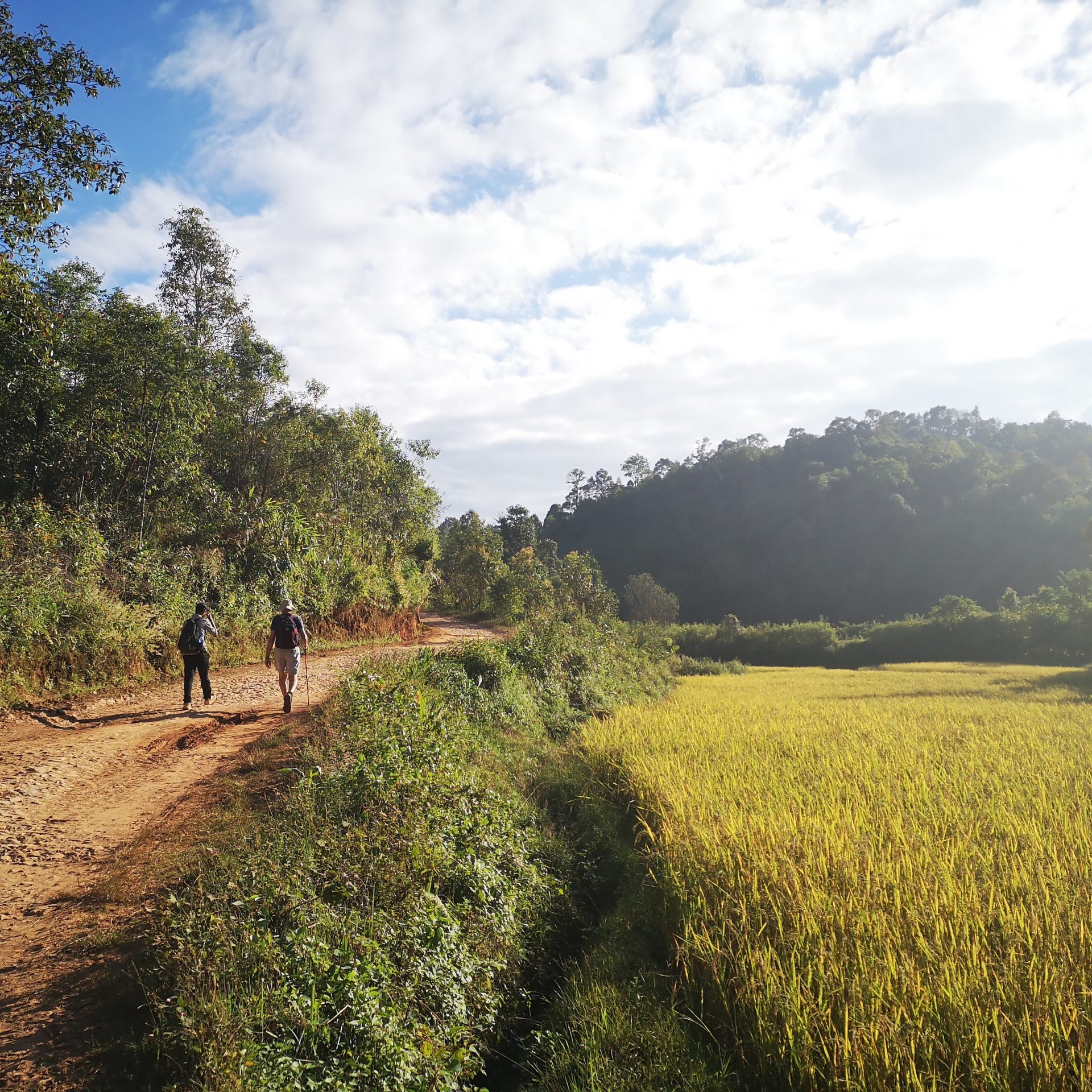 A Trek In The Shan Hills Myanmar

We are in the town of Kalaw, Shan state, central eastern Burma, a ten hour bus ride north of Rangoon. JJ Express is our chosen bus operator. Club Class size reclining seats, a complimentary blanket and a bottle of water. There are two drivers and a stewardess. Aeroplane comparisons don’t stop there as it’s rough turbulence for the next ten hours.  No toilet so regular stops on the way. We use the optimistically named expressway, a narrow laned dual carriageway that degenerates into an winding unmade boulder strewn road climbing to Kalaw.  We arrive at 3.30am. It’s dark, only dogs and a few men huddled around street corner fires. We find an all night coffee shop and drink sweet tea for an hour before a taxi appears to take us to our hotel. 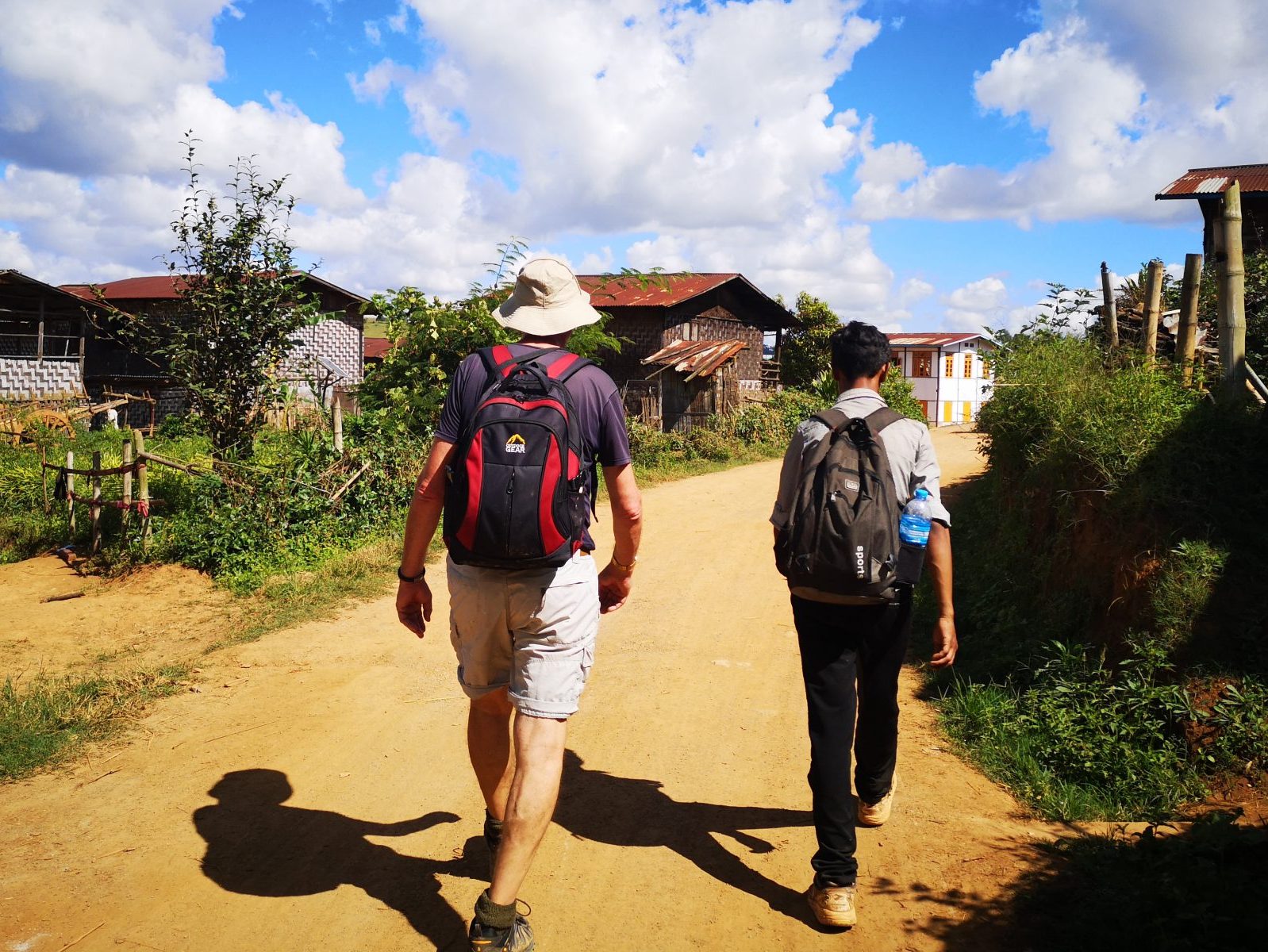 The region is home to the proud Shan people, Myanmar’s second biggest ethnic group; about five million people. It’s rich fertile land undergoing rapid change i.e. investment and development. Despite the country’s reputation for oppression (more on this later) the people look wealthy and healthy. They’re an attractive race who like to party.  On our first night in town we witnessed a vast exuberant and colourful street carnival to celebrate the end of the rainy season. Jo took hundreds of photos of the various local tribes which I’m sure she’ll share.

We’ve arranged a three day, two night, thirty mile trek (£31 a day per person for accomodation, food, guide, guide’s tip, national park entrance fee and boat trip across Inle lake). Our guide is Aye Min, age 34, bachelor, friendly, moody – or maybe just knackered – he seems to trek seven days a week, sensitive; “what do you think of Burmese? he asks tentatively, he needs to work on his English, son of a police sergeant who lost a leg stepping on a landmine when he was twenty years old but stayed in the force to retirement.

Aye Min has a persistent cough and like the rest of his fellow Burmese he hawks – the noisy clearance and spitting of mucus from deep within the throat. There’s a lot of paan (a betel leaf filled with chopped betel and slaked lime to which is added red katha paste) chewing going on so big splats of red gob all over the place. You have to carefully avoid stepping on slug like gobbets of phlegm. Why don’t the women do this? They chew the paan too – we came upon an old woman weaver who was a paan dealer on the side.  But Aye Min didn’t look like a paan man. His cough, I think, is caused by the all pervasive domestic wood smoke and diesel fumes. 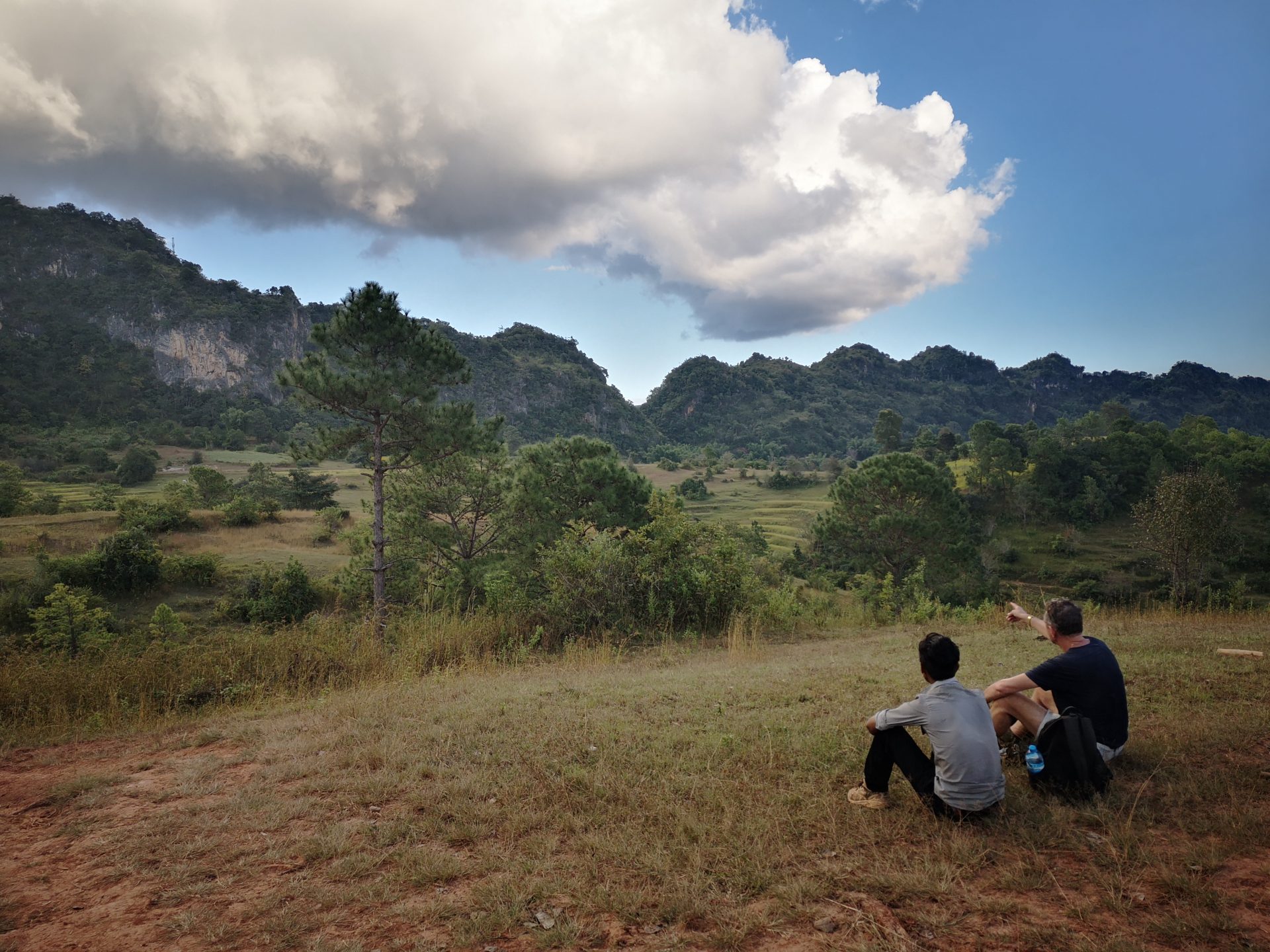 For the three day hike he carries a small backpack containing a pair of shorts, a toothbrush and a black leather jacket. I, as usual, am overburdened with multiple pairs and layers of everything, a big pair of binoculars and a bottle of whisky.

Shan is very diverse and fertile landscape of limestone outcrops and occasional visions of the Sussex Downs!  Many huge banyan trees, bigger than any of our oaks. I stopped to photograph one and unfortunately left my collapsible hiking pole underneath it. An offering to the buddha?  I now have a non collapsible bamboo stick. 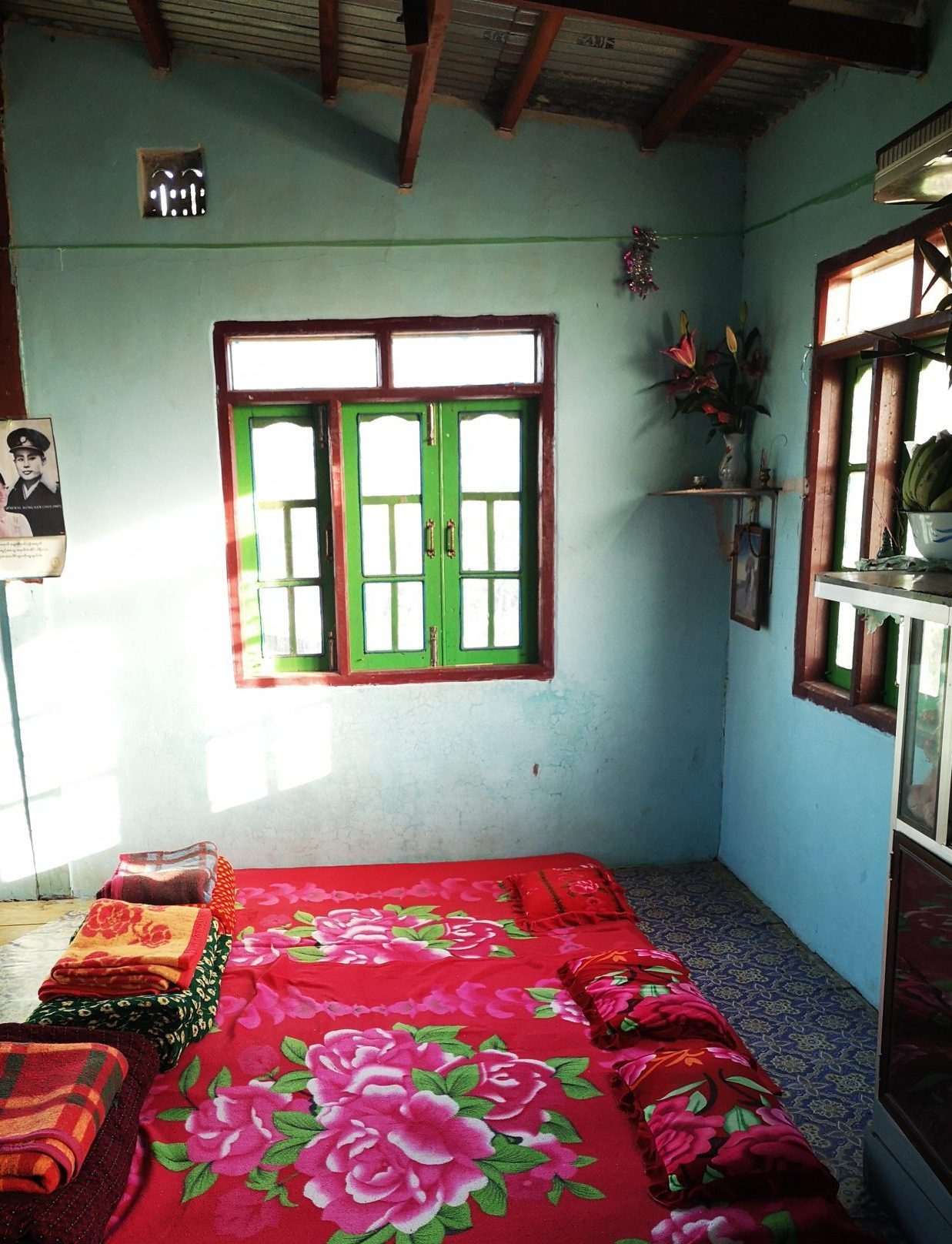 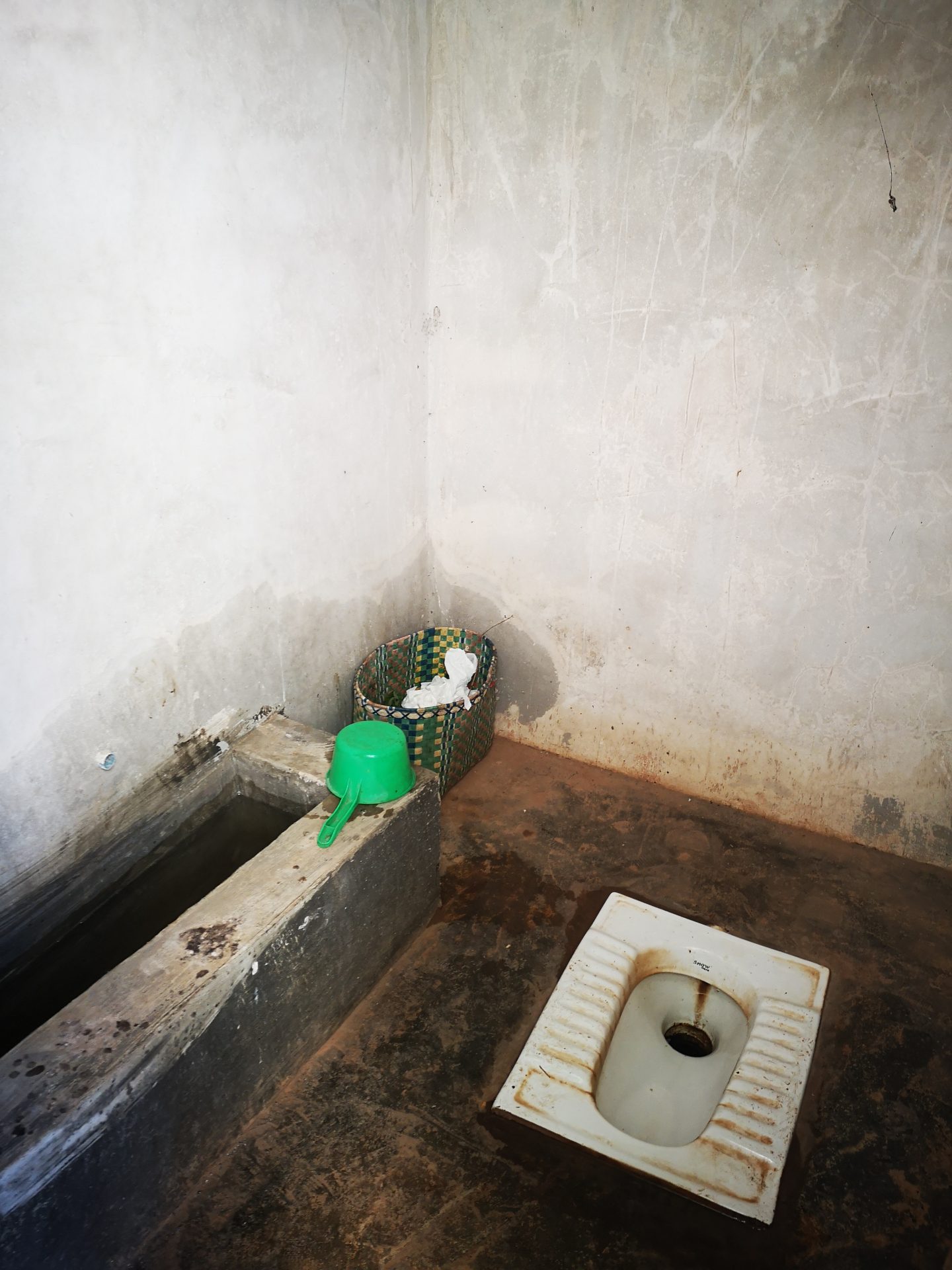 Accomodation: Night one is a homestay with a Burmese family who forsake their  upstairs bedroom and Buddha shrine for us – as well as the shrine there was the ubiquitous portrait of Aung San Su Kyi and her handsome dad, Aung San, in a leather flying jacket. Our host’s youngest, a whingey toddler threw a half chewed piece of cabbage in my direction when I tried to photograph him – little sod. As for the toilet: score out of ten, two and a half. It would have been two, but I refused to use it. Accommodation: Night two is a sort of MASH compound with huts instead of tents. Generator off so lights out at 9pm. No sheets, just thick musty floral patterned woollen blankets. It is cold, damp and misty in the morning.

Fondest and vaguest memory is that of demolishing half a bottle of Grand Royal Special Reserve blended whisky (well not quite half a bottle as Jo and Aye Min had a couple of good shots each) and waking up with a clear head the next morning. So it’s quality whisky or perhaps it was the sluice down with a pan of cold water in the “shower” that cleared the head.

My fondest and clearest memories are of the features and colours of the beautiful landscape. It’s hilly country so the vista changes at every turn and there’s a wonderful diversity of people and agriculture; rice paddys, tea plantations, orange trees, fields of yellow sesame flowers and bright red chilli peppers and tomatoes.  And its all done manually with the aid of oxen and a remarkable small tractor called the Chinese Buffalo. And despite the agriculture there are still plenty of trees. 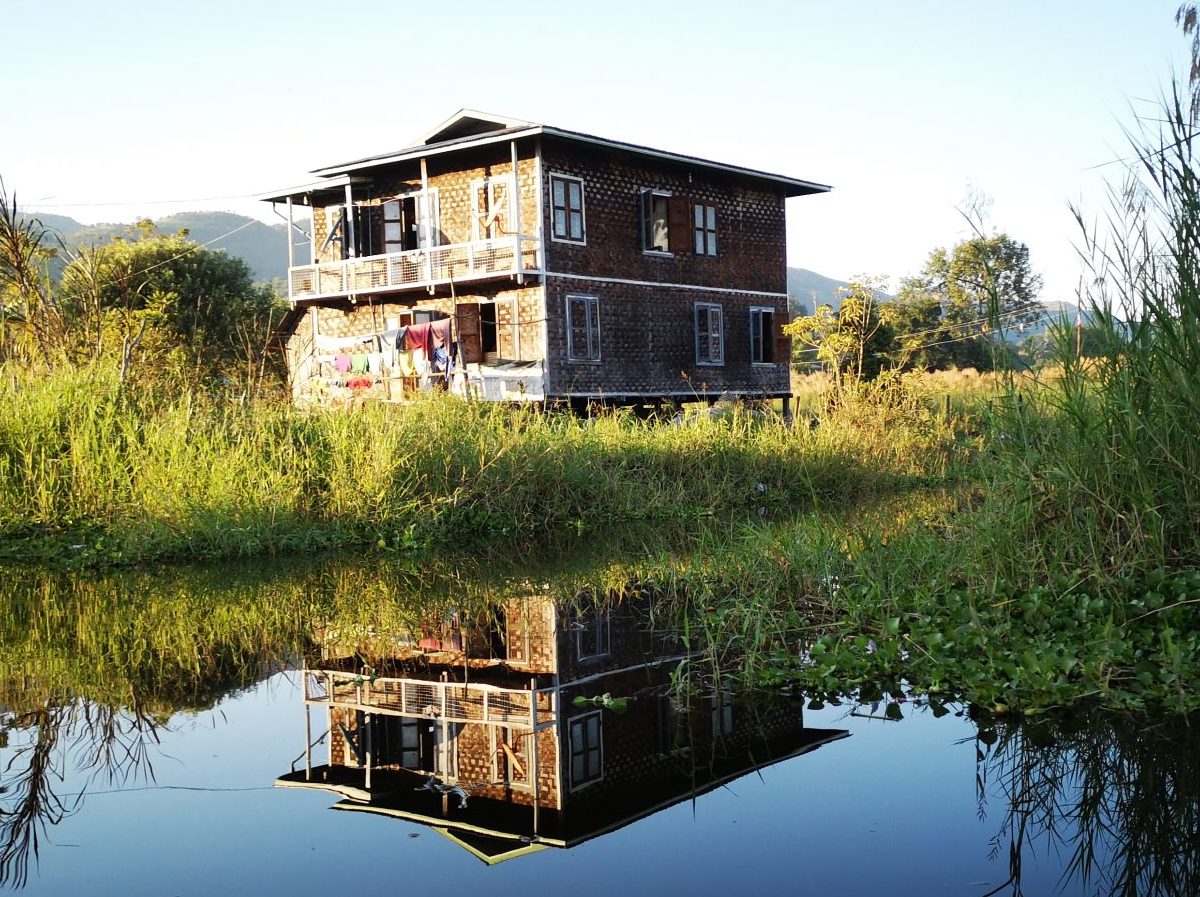 The trek ended with blistered feet at Inle lake – a superb stretch of freshwater (22km x 7km) surrounded by lush hills. We said bye to Aye Ming (gave him two good tips: one of £12 and another to work on his English).  We boarded a longtail boat for a fast cool voyage, initially through a narrow canal of floating gardens of cucumbers, squash, tomatoes, then into the lake to Nyaungshwe. Saw several cranes in at the wetland sanctuary near our destination.

Nyaungshwe is a small bustling lakeside town where we checked into a proper hotel with a proper toilet and proper sheets – bliss. But we’ll be back to basics soon enough.