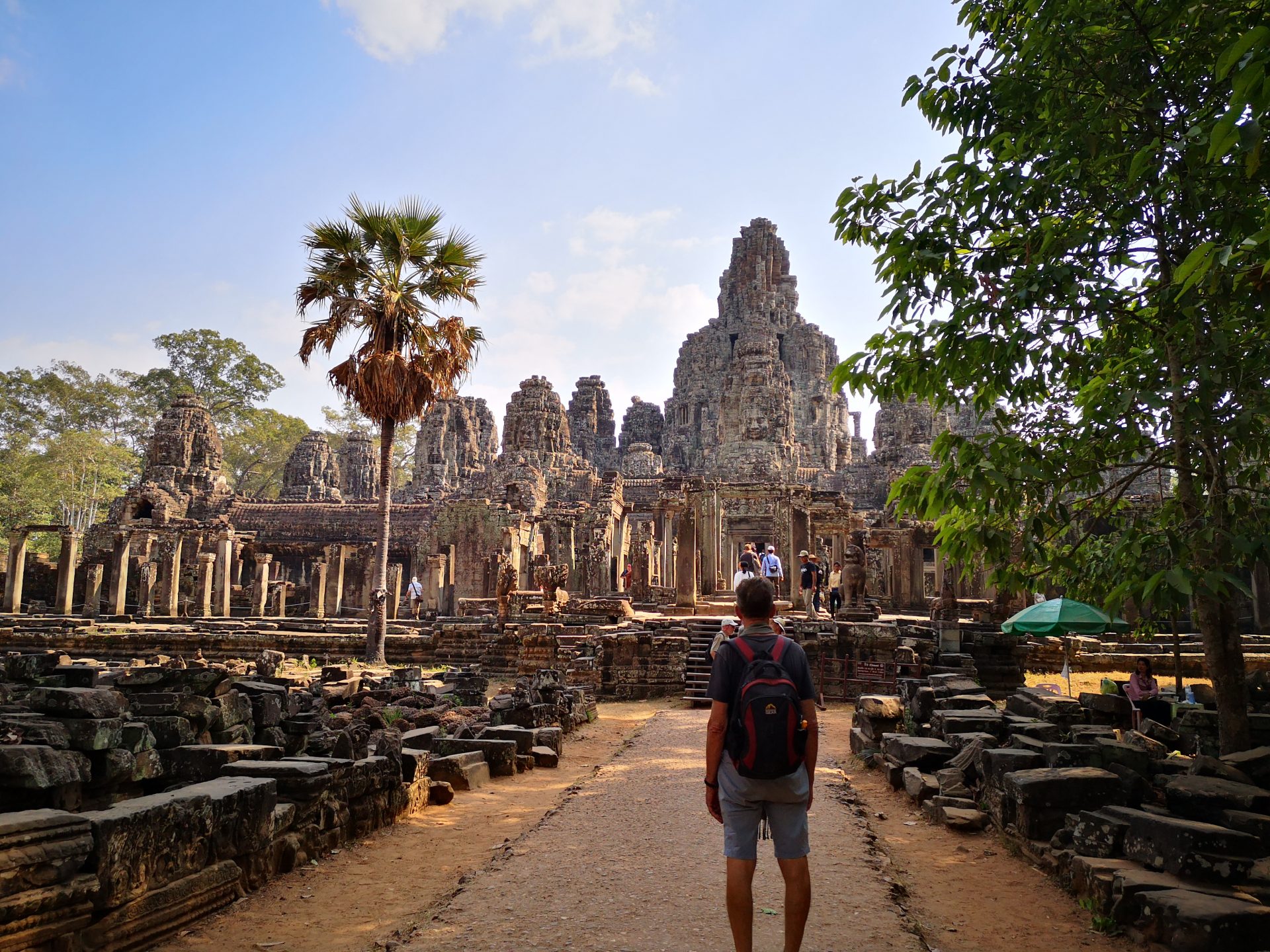 Angkor Wat in northwest Cambodia, the seventh Wonder of the World and the largest religious monument in the world, is located just north of the country’s second biggest city Siem Reap, which is itself just north of the biggest freshwater lake in Indochina, Tonle Sap.

Angkor Wat is only one temple of many which together with the superb forests surrounding it, encompasses about 400 square kilometres – not something you walk around. As soon as we arrive in Siem Reap we engage the services of self named Bruce Lee, tuk tuk driver. For $25 he will pick us up from our hotel at 4.40am the next morning and be at our service for a day’s tour of the temples.

I’ve been circumspect about visiting Angkor Wat. It is an incredibly popular tourist destination, visited by several million people every year, many of them Chinese. And it’s a very unpleasant experience to be amongst hordes of pushy, obstreperous, selfie obsessed Chinese tourists in places that deserve, if you really want to enjoy them, a little silence and reverence. But now in February 2020 nature has given us, and Angkor Wat, a reprieve. The COVID19 coronavirus outbreak which originated in mainland China back in December has escalated and, whilst I truly sympathise for those who have been affected by the disease, the Chinese (and other nationalities) have been discouraged from travelling to Southeast Asia. Consequently, Angkor Wat and the city of Siem Reap are both devoid of the hordes and remarkably quiet. 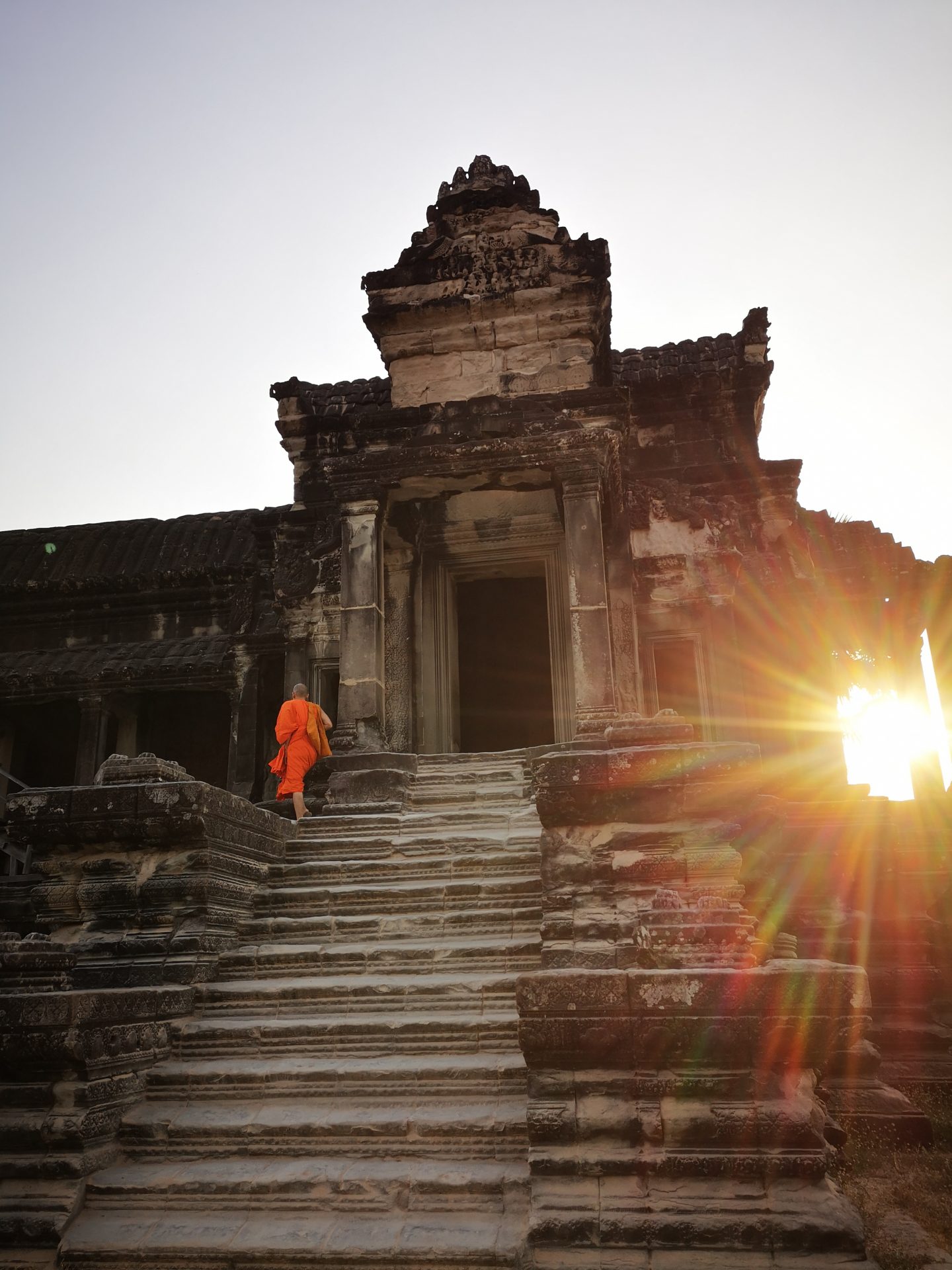 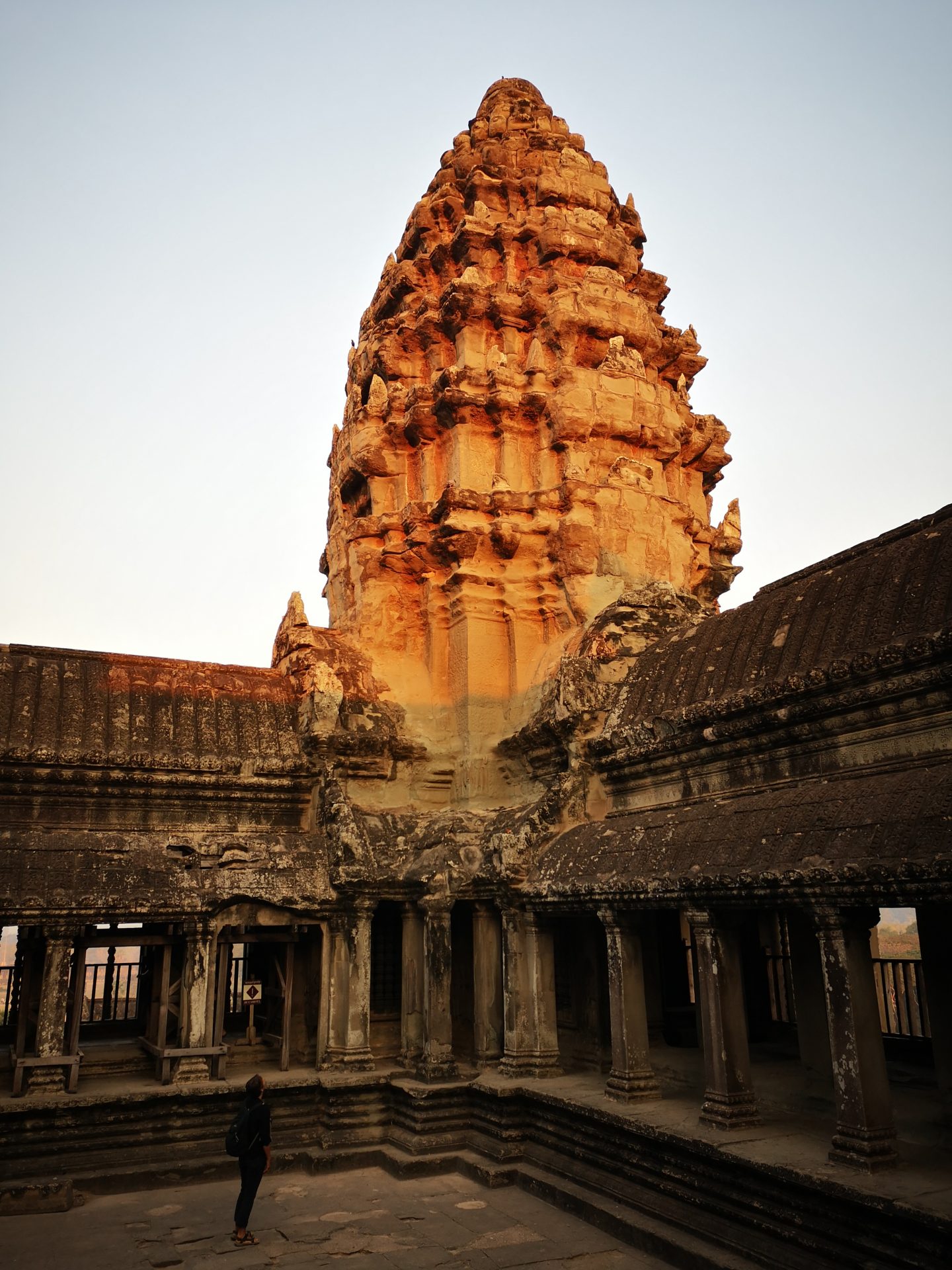 A one day ticket for the Angkor Wat complex of temples costs $37 or $62 for three days. I reckon we can see all we want to in a day. Jo is unsure but I manage to convince her that one day should be enough with the option for more if required – there’s a small circuit of temples (11miles) and a large one (which including the small one is 17miles) – we shall concentrate on the small one comprising about a dozen temples.

Bruce is outside the hotel, waiting for us in the dark, at 4.30am. He exclaims ‘luvvly jubbly’ at any opportunity to do so, even though he’s never seen Only fools and Horses. It’s a four mile ride to the entrance of the Angkor Wat complex and the ticket office. We are wrapped in scarves, it’s chilly. There are quite a few cyclists on the cycle path heading towards the temples. Cycling is an option we considered but as we’ve limited ourselves to a one day tour we need to be efficient with our time.

Angkor was the ancient capital of Cambodia and, during the 10th and 12th centuries, when the population of London was a mere 50,000 people, that of Angkor was over a million! All that remains of the ancient wooden city are the stone temples which were originally dedicated to Hindu deities. During the next two hundred years, for various socio political and environmental reasons, the population of the city gradually declined and by the 15th century it was largely abandoned but not, as the French tend to claim, forgotten. It was during the 16th century that Khmer kings embellished the temples with images of the Buddha. And in succeeding years it was visited by Chinese, Japanese and Portuguese missionaries. It was a Frenchman, Henri Mouhot, who visited Angkor in 1860, and it’s his drawings of the site that captured the imagination of the west and led to the myth that the French had ‘discovered’ it. 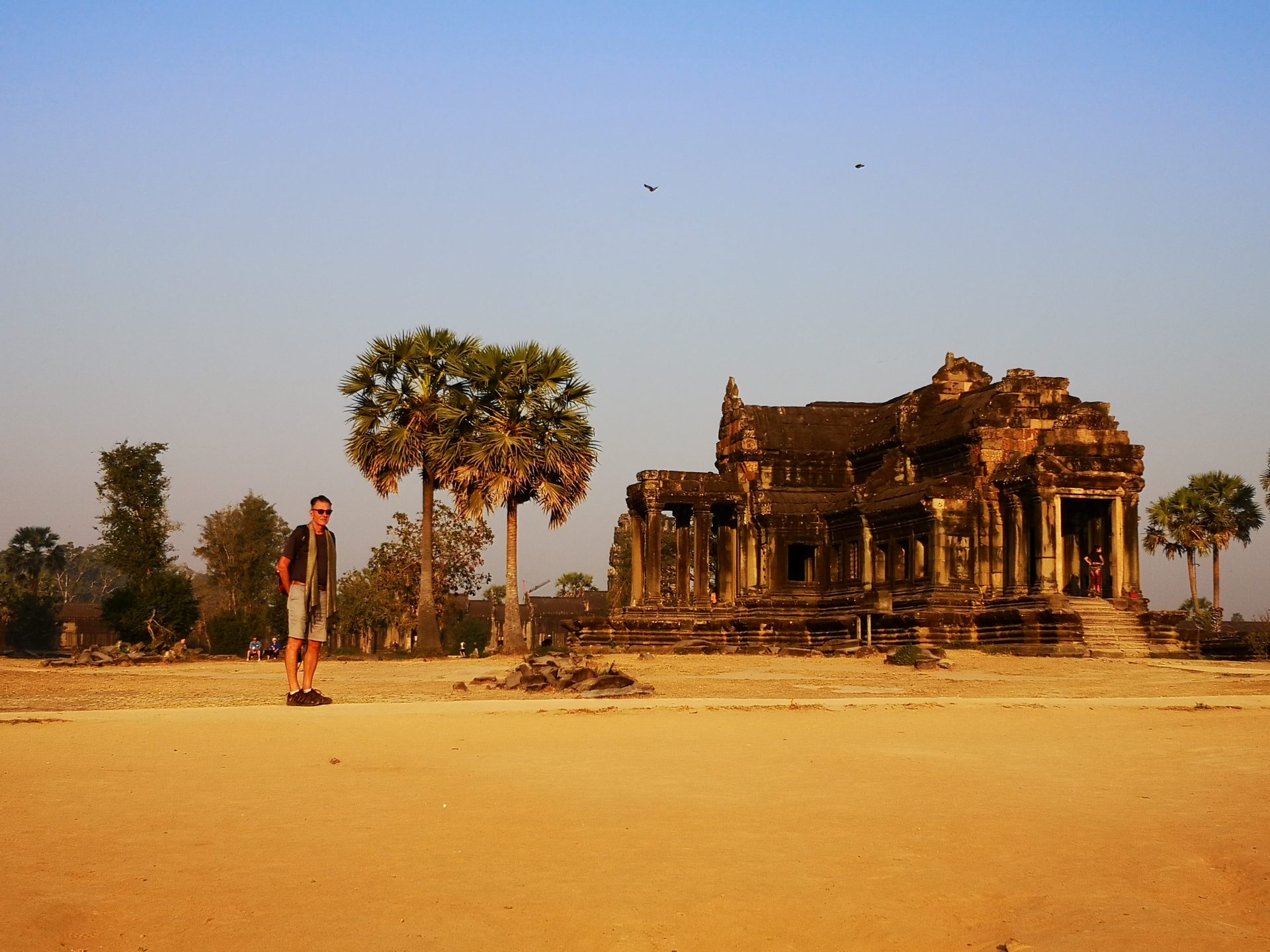 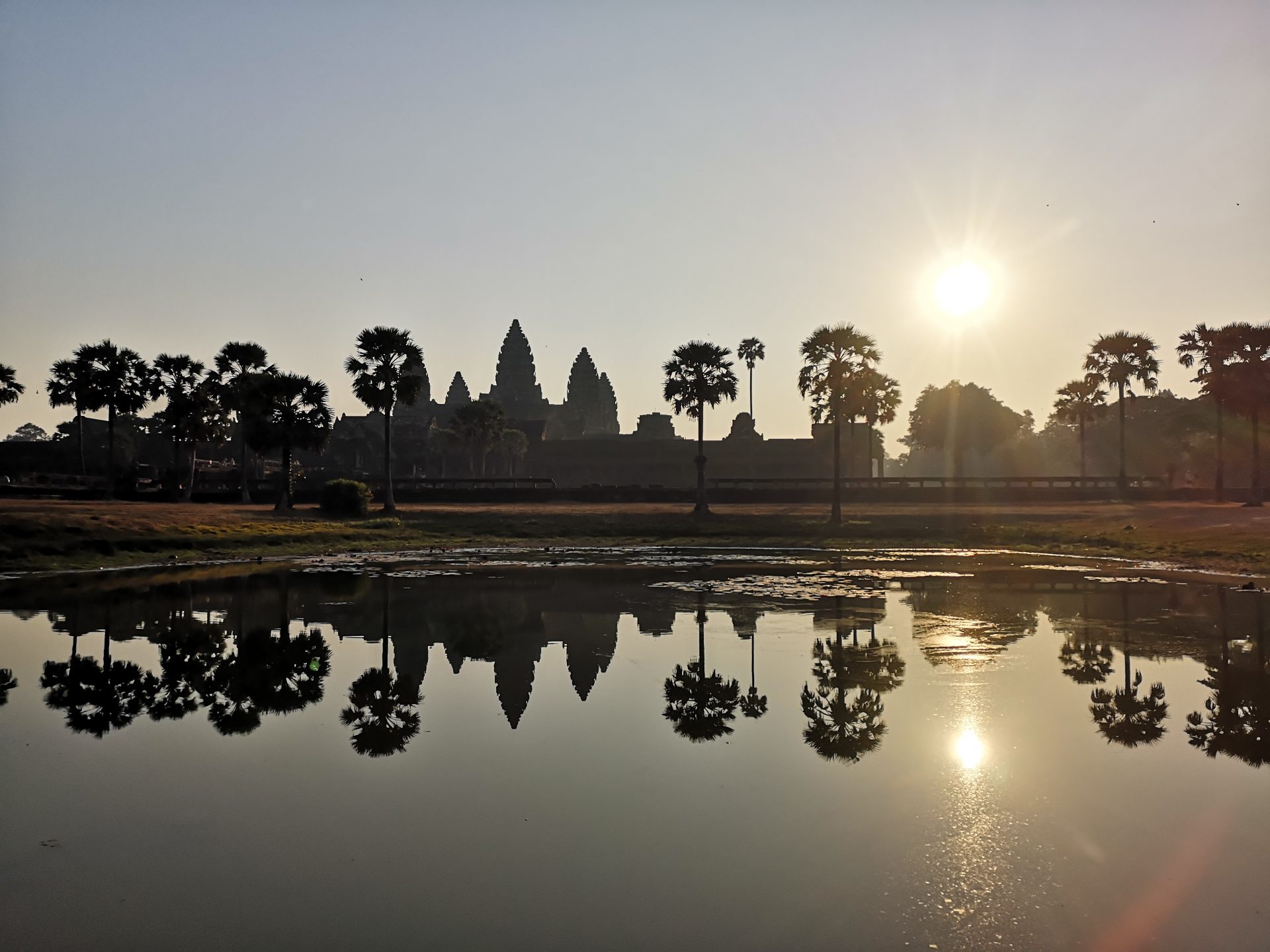 Sunrise at Angkor Wat is supposedly a magical experience. My experience was not mystical, sitting around a pond on the outskirts of Angkor Wat temple amongst a crowd of people, many of them shining smartphone torches, thereby completely destroying the subtle changes of light accompanying the impending dawn. People can be so insensitive to the time and place, it’s fortunate that there are not many about.

At over 400 acres, Angkor Wat is a big temple site (a football pitch is about 2 acres). We climb up to the central sanctuary and the outlying towers. We meander through the colonnades in the inner and outer walls. The red sandstone is brilliantly illuminated by the light of the rising sun. After two hours we have completed our visit to the Angkor Wat temple – and it’s only 7.40am.

But the day ahead is full. We see Srah Srang Temple overlooking the mirror still waters of the lake, and the almost entirely deserted Banteay Kdei temple ruins set amongst some of the most wonderful trees I’ve seen in Cambodia. The trees become an essential pleasure of the day delighting me often more than the manmade temples. The 400 square kilometres of Angkor are populated by thousands upon thousands of towering ancient trees. It’s an insight into what Cambodia must have looked like before deforestation.

We visit Ta Prohm, popularly known as the Angelina Jolie temple, as it featured in the Tomb Raider film starring Jolie as Lara Croft. This isn’t a big temple and it’s the trees that dominate the scene – centuries old strangler fig trees seem to melt and climb over the ancient stonework. Ta Prohm can’t cope with even a small number of visitors, most of whom are only interested in obliterating the scene by striking cheesy or alluring poses, or both, in front of the trees and stonework for naff snapshots. Most of them don’t give a toss about the temples.

Jo has a fondness for old things; fossils, dinosaurs, me! She’s read about a mysterious carving in Ta Prohm and she asks a curator to take us to it. In a quiet corner, on a crumbling temple wall is a hand sized engraving of what appears to be a stegosaurus dinosaur.  Several theories have been advanced to explain its presence. Some maintain it’s a recently-carved hoax, while others say that the ancient Khmers could have unearthed a fossil and figured out what kind of creature it was. Another theory has it that the image actually shows a cow or rhino with a palm tree in the background – the palm’s fronds being easily mistaken for the fin-like blades running down a stegosaurus’s back. The last and easily most controversial proposition is that the carving is evidence that dinosaurs really did live on until much later than previously thought. Perhaps here in the humid, ancient jungles of Southeast Asia, where the climate has remained largely unchanged for millenia, giant reptiles lived on well into the human era – long enough to persist in the Khmer memory. An intriguing but far fetched idea. 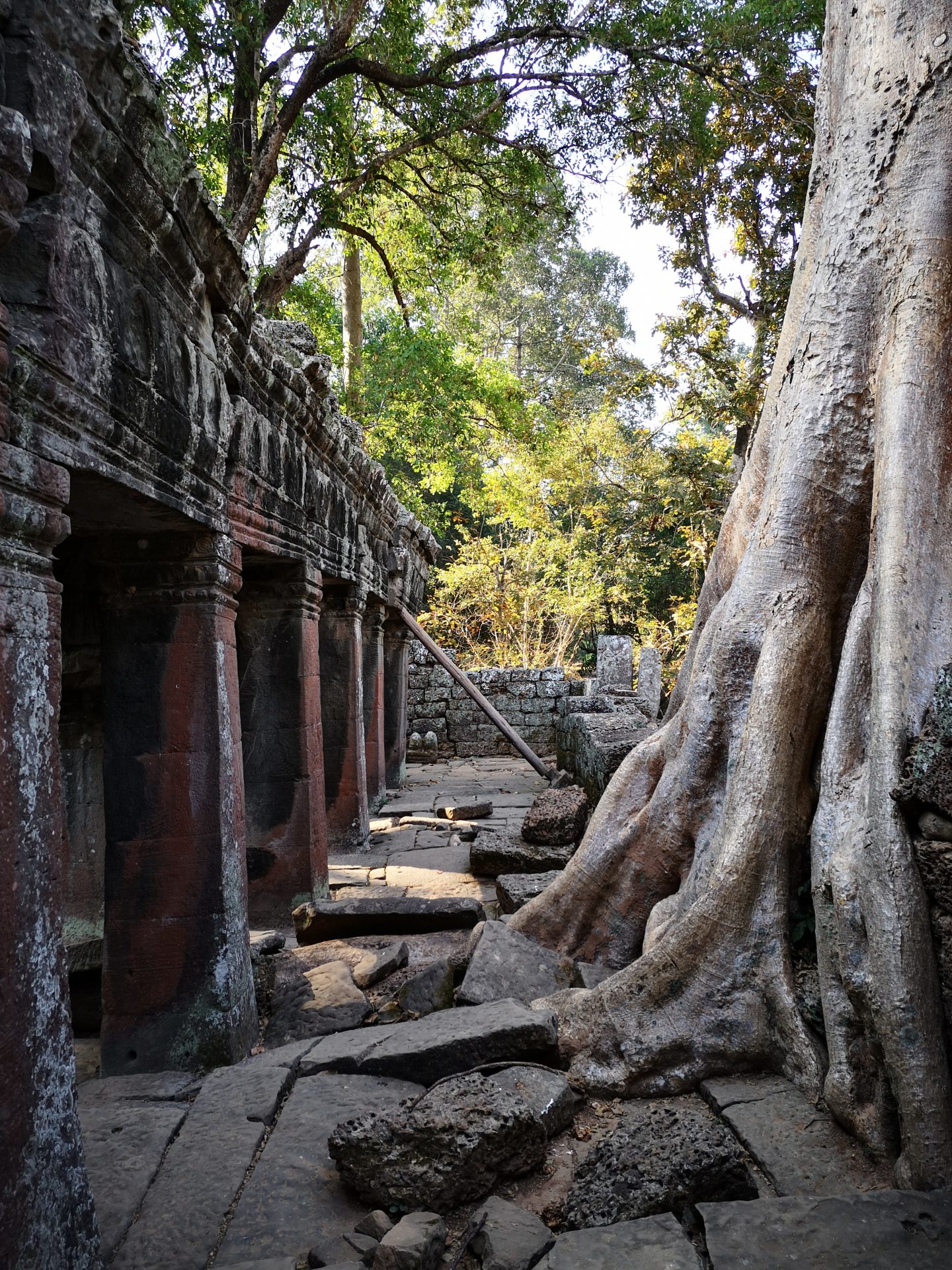 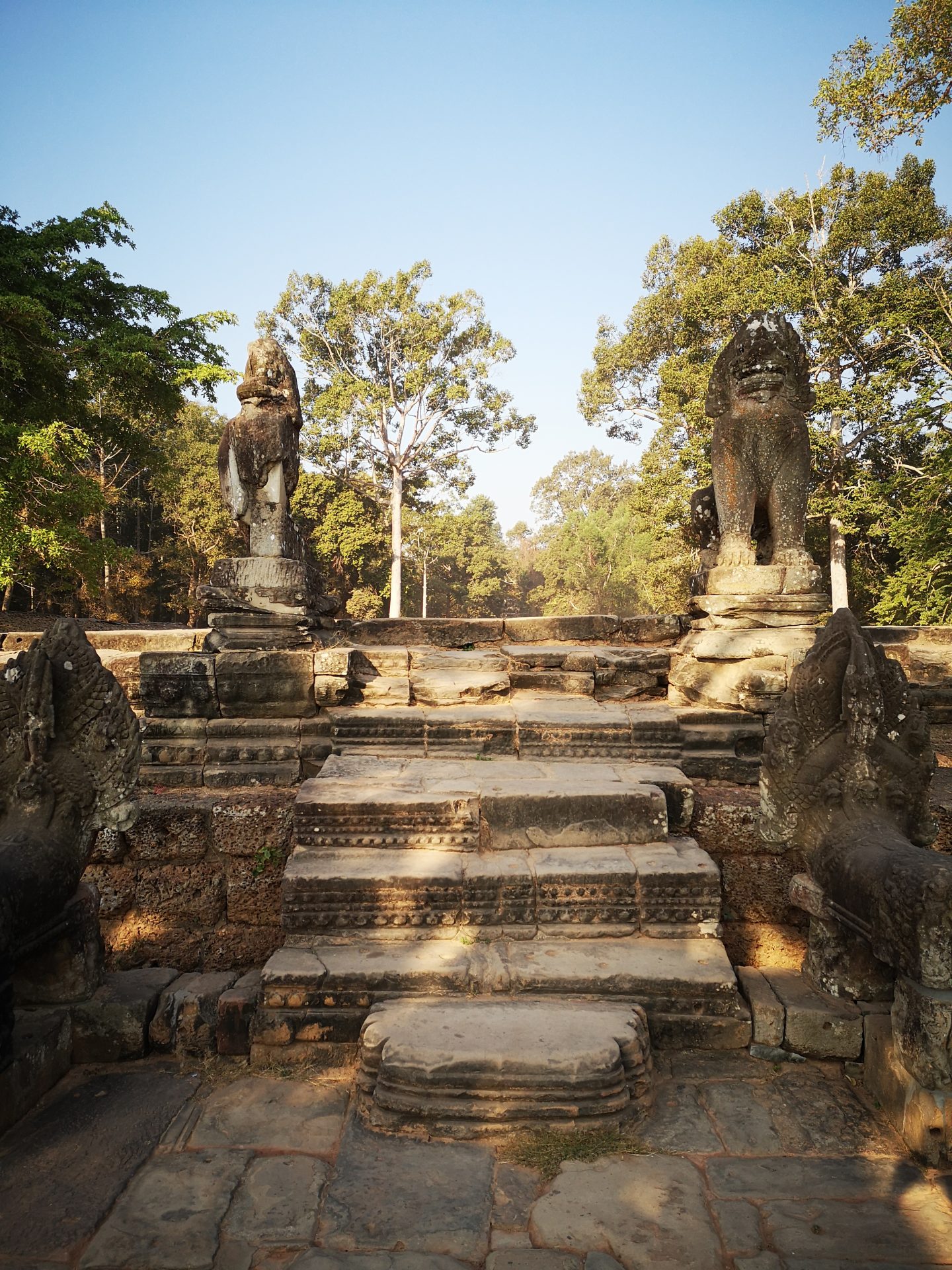 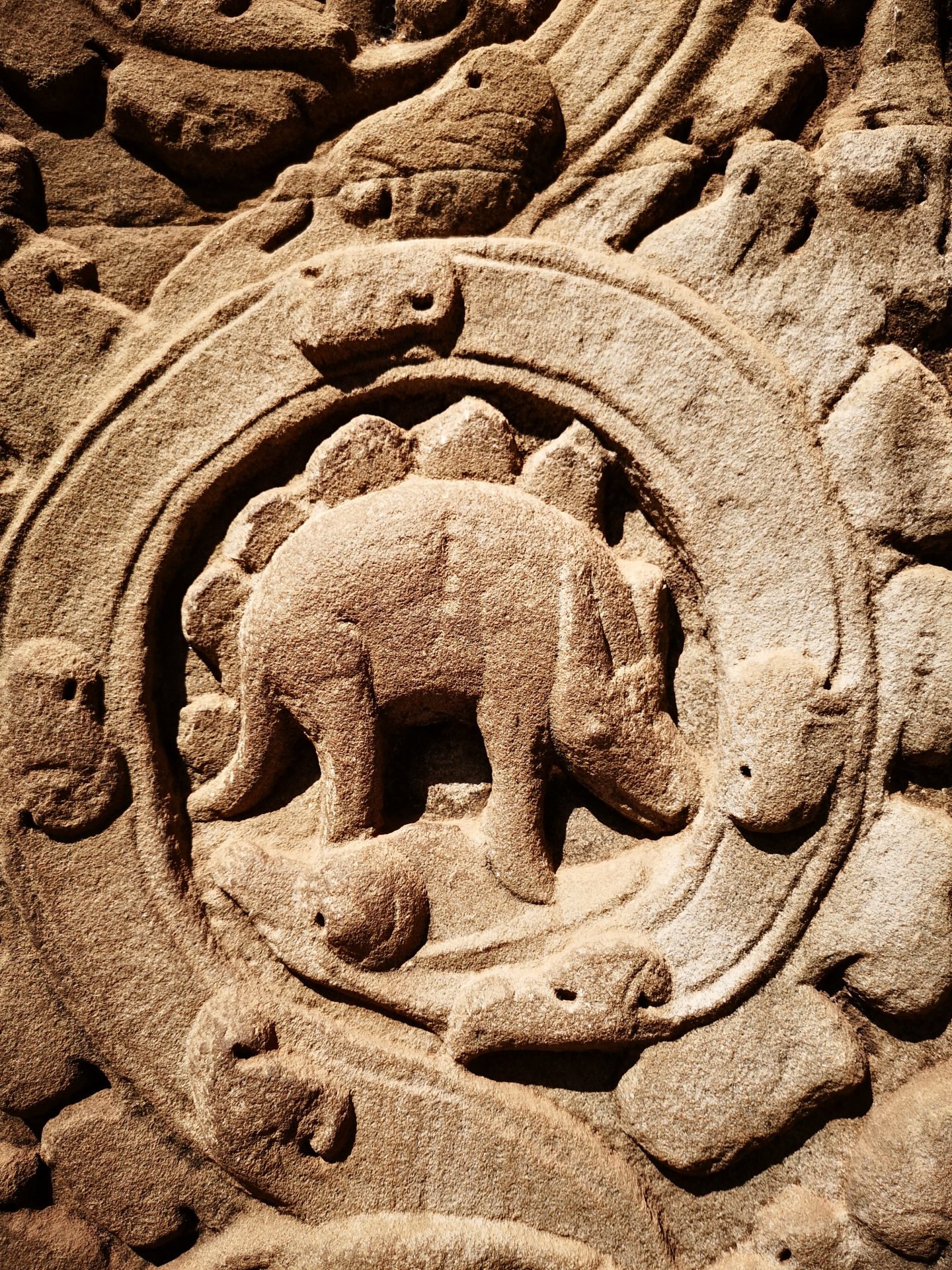 I start to wilt in the midday sun when we stop for a lunch of noodles in a tent full of electric fans. We spend the afternoon trying to stay under the shade of the majestic trees as we visit the outlying temples and, after I have a short nap in Bruce’s tuk tuk, we conclude our visit with a clamber over the ruins of the mighty Angkor Thom temple. We’re back at the hotel at 4pm.

What else is there to do in Siem Reap? This evening we visit The Village Cafe, co owned by our friend Baudoin from Phnom Penh. Seated at the bar, we meet the other owner, Stuart from Glasgow and we’re introduced to a retired BA Pilot and his French wife (ex British Caledonian air stewardess). The food at the Village Cafe is excellent and the wine is very good and relatively inexpensive. The evening develops into a bit of a party – we meet Bauduin again for a last glass of wine and exchange of contact details.

We spend the next two days at the poolside of the Golden Gecko hotel where we meet George Nickels and his young son. George is a freelance photojournalist from the UK who has been based in Phnom Penh for the last eight years. His work focuses on the plight of the poor in modern Cambodia (see georgenickels.com). He’s reported on the plight of human trafficking (both men and women) and the deaths of thousands of children every year as a result of the the lack of drinkable water, ironically they live along the shores of the massive freshwater Tonle Sap lake – the lake that Top Gear presenter Jeremy Clarkson popularised when he recently declared, uncharacteristically, that it’s low water level was due to global warming. But of course his outburst was either based on ignorance or it was an attention grabbing stunt, probably the latter.

It’s not global warming that’s causing low water levels but, as is often the case, more localised factors. Massive deforestation causes erosion and the runoff is silting up the lake. And new dams on the Mekong River, notably in China and Laos, are affecting the flow of water into and out of it.

George’s photography is splendid, moody and dark and he reports on untold plights of the poor in Cambodia. He would like to produce a book but the costs are prohibitive and it’s not easy to get a return on the investment. I hope he succeeds and I wish him luck.

On our last evening in Siem Reap we visit Pub street, heralded as the best place for bars and restaurants in Siem Reap. But it’s a dreadful neon strip of sports bars and tacky boozers – reminding me a bit of the environs of Leicester Square in London. We walk briskly through it towards the bar of Raffles Grand Hotel D’Angkor. Top tip: dress up and make it over to the grandest hotel in town for Cocktail Hour. Kymer Gin Gimlet and spicy Bloody Mary cocktails accompanied by canapes – only $4 each. Afterwards we have a delicious and inexpensive dinner at Le Malraux restaurant in a charming narrow lane near the river.

We’ve been working on plans for our forthcoming month in Vietnam. We’ve just received our online visas and we’ve booked two seats for tomorrow on the high speed riverboat down the Mekong from Phnom Penh to Chau Doc in Southern Vietnam. 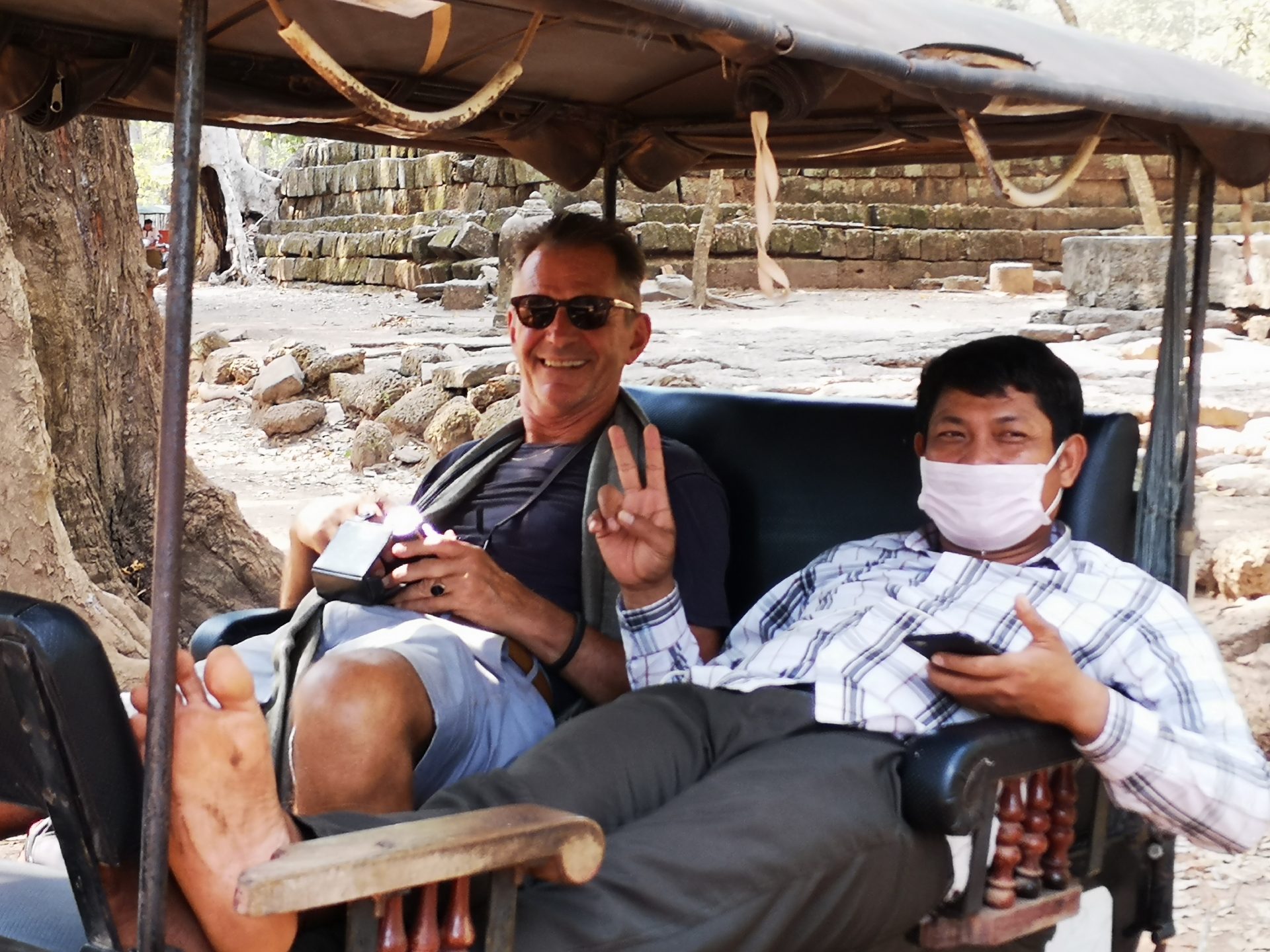 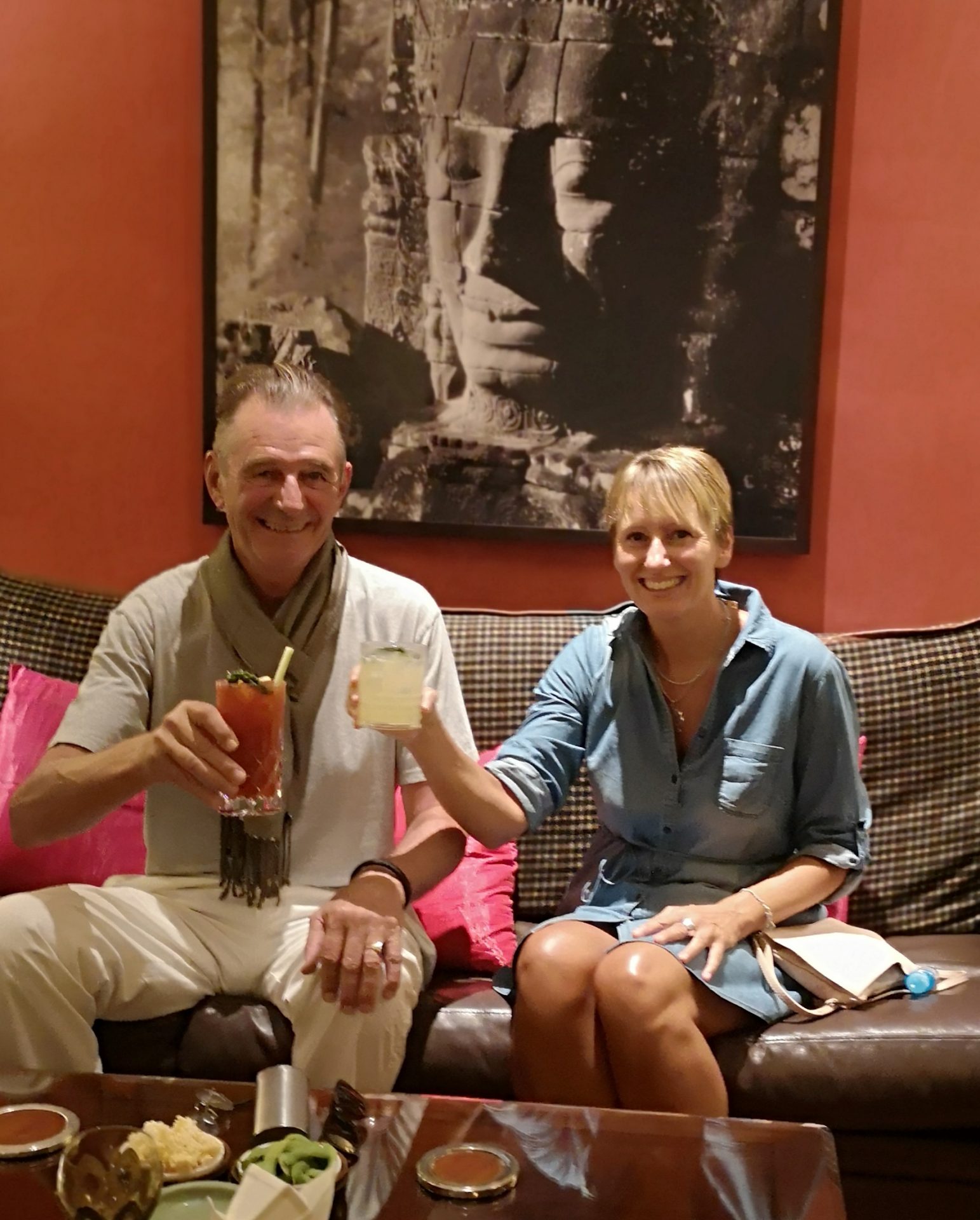