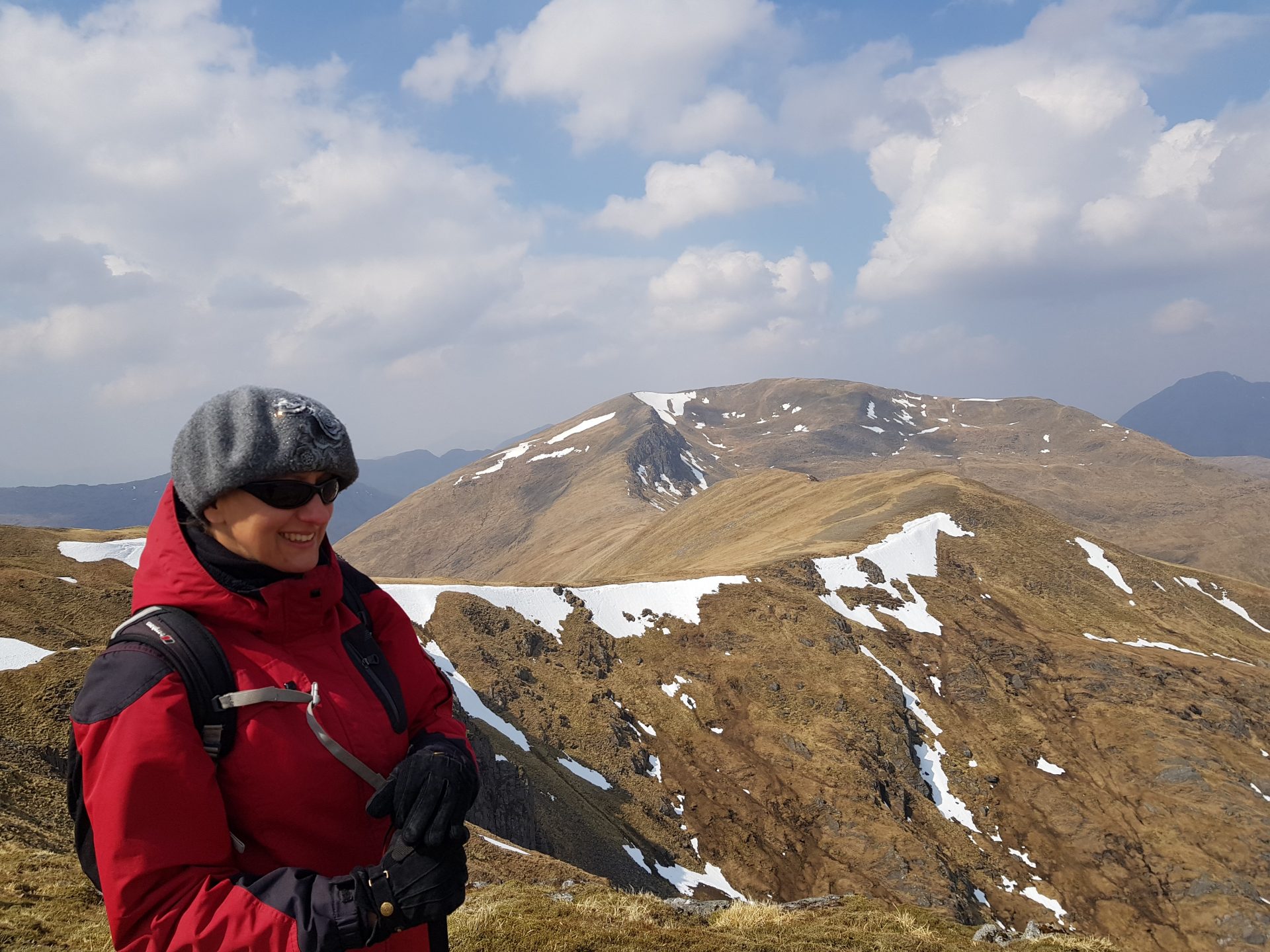 I get vertigo, mostly mild, very occasionally severe. Manmade heights, skyscrapers and bridges seem to bring it on severely. Don’t look down is the best prevention. But when you’re trying to find a foothold on a steep outcrop of rocks and boulders, looking down is unavoidable. We were halfway up a three thousand foot granite mountain and exposed to the full force of a south westerly wind.

I was beginning to feel a little uncertain about the wisdom of this venture. Head down, I rounded a huge boulder to encounter Jo with her arms wrapped around a pinnacle of rock. I fumbled for my camera and took a short video of her predicament. Gasping for breath I smiled meekly. “How are you feeling?” I asked. She scowled, then laughed hysterically. “I’m never going to do another Munro in my life.” she said. “Coz I’m going to get blown off this mountain. And I don’t like you as much as I used too.”. A strong gust of wind forced her to hold the pinnacle ever tighter. I patted her back and looked around. Up above, the last ascent tapered up into a narrow ridge with steep snow-covered slopes falling away on either side. The small lochs and ponds around us were frozen. The wind was gale force. The landscape brown, white and rock strewn. And dark clouds were gathering around the summit. I realised we really were up a mountain and I thought about that compass.

That was eight days into a walking Holiday in the Scottish highlands and island of Lewis and Harris .I’d just woken up. “Let’s bag a munro.” I said. “A bag of what?” asked Jo. “Lets bag a munro” I said. “What are you talking about?” said Jo.

It was Easter and the weather in north west Scotland was unseasonably warm and sunny. We’d hiked every day, on long deserted beaches, up rocky cliff faces, through bogs and up mountains. I was feeling a little tired but strong and I’d reached that pleasant state where I was happiest trudging through the landscape.

We’d come to Scotland to – amongst other things – see a golden eagle. There had been lots of debating (arguing?) about whether the eagle we’d just spotted was a sea or golden eagle – it’s the juveniles that confuse things. We never really did agree. Oh, and the other things were seafood, whisky and hiking.

If you go for this type of holiday in the highlands and islands (unless you fly-fish or play golf then there is no other type), you must be lucky with the weather. The region is infamous for endless days of wind and rain or sudden squalls on days that appear fine. In good weather the region is truly magnificent. But as I say even on good days you may need to hang on to your hat.

We’d walked the magnificent beach at Losganintir and another on Harris from Huishnish to Crabhadal. And we’d climbed up to the wet and windy summit of Ceapanhal where the 360 degree view of Lewis, Harris and the Atlantic ocean was totally obscured by scudding cold damp clouds. Yet three miles from this hilltop the weather was fine. And so it was on the penultimate day of our holiday, on another fine but breezy day, that I suggested the Munro. It was Sir Henry Munro who, in 1891, completed the task of mapping, measuring and walking every peak in Scotland over 3,000 feet – and there are a lot of them – 282 including Ben Nevis. Over breakfast at our hotel on the Kyle of Lochalsh we asked Ross (a man of many parts: hotelier, bagpipe maker and mountaineer), if there were any local Munros suitable for novices. He spread an OS map on the table and pointed to the Maol Chinn-dearg. “You’ll manage this without too much difficulty,” he said. “It’s a fair hike, two hours up and two hours down” He indicated a blue P on the map. “Park here, cross the road. You’ll see a wooden notice board. That’s where the track starts. Just follow it till it disappears then just follow your nose to the summit.” He indicated the route on the map. “It’s boggy in places and there’s a rocky outcrop that’s a bit tricky half way up but you’ll manage. Can you read a compass?” “Do we need to?” I asked. He lifted his head to the dining room window “It’s a beautiful day but the weather can change fast in the highlands.

So it’s important to be able to use one.” I cast my mind back to my boy scout days, azimuths and map orientation. “Yeah I can use one. I’ve got one with me”. I hadn’t used it for years but how difficult can it be? He looked at me sceptically. “I don’t mean to be rude.” he said “but can you really use one? I felt a little affronted. “Yeah sure” I said. 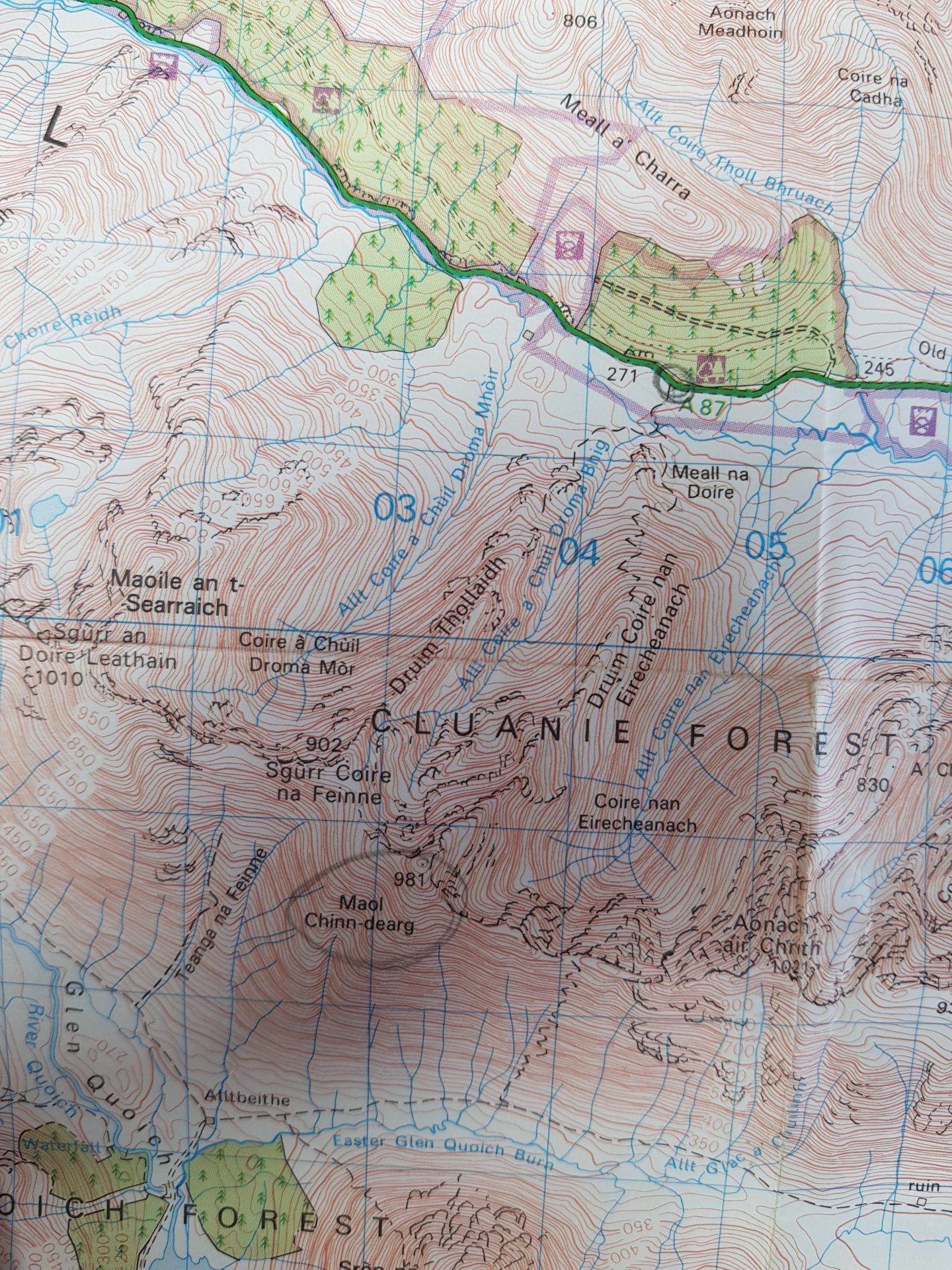 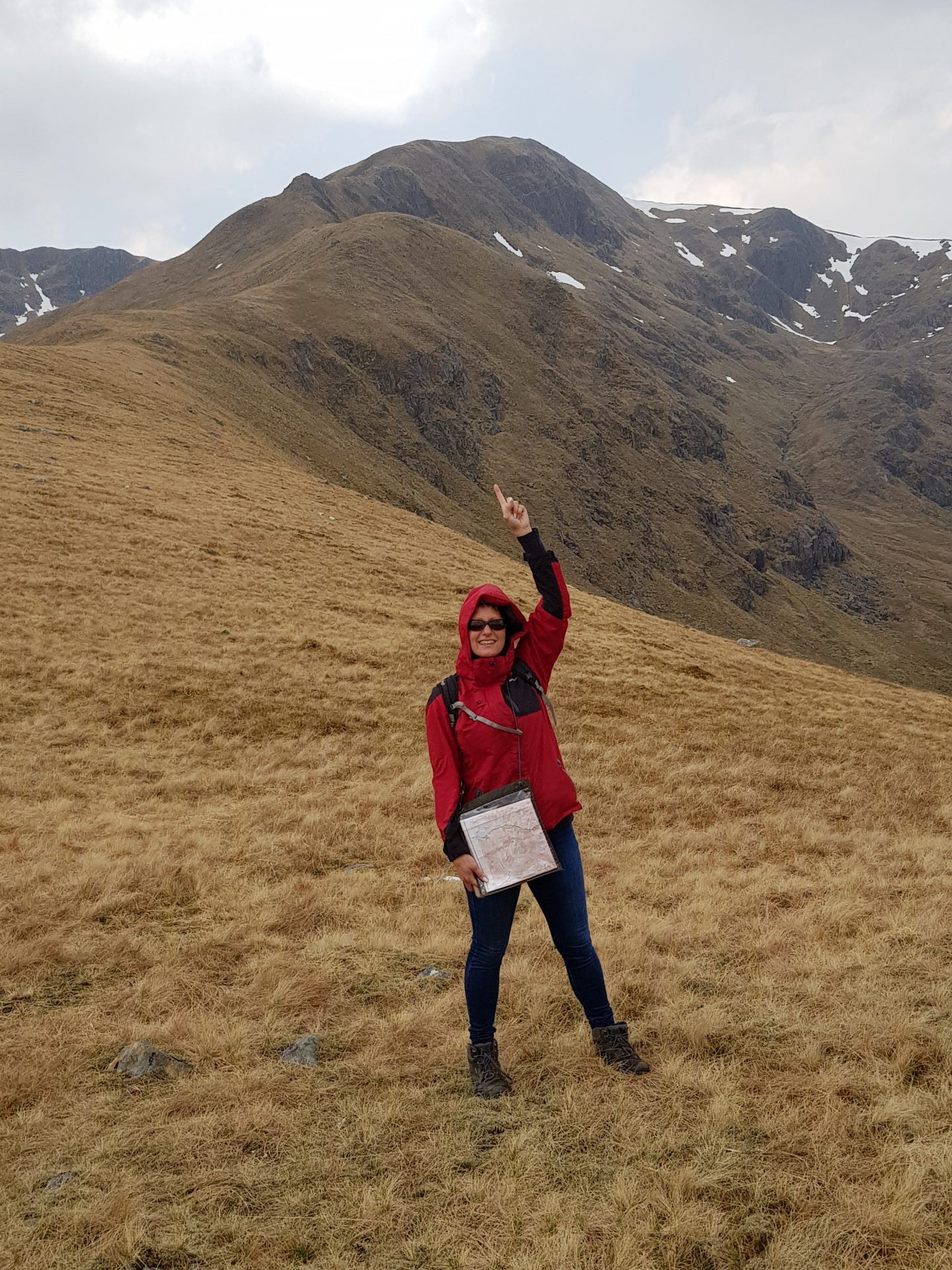 So after a full Scottish breakfast (like the full English with the option of Haggis) we set off for the fifteen minute drive to our start point in Glen Carron. We parked, booted up and crossed to a fence stile. There it was, a short distance from the road, like a local parish notice board welcoming us to Cluanie Forest. The track was clearly visible in the bog and stretching out above us was the humped ascent of Maol Chinn-dearg. Jo strode assertively forward whilst I fumbled for my phone for the first image of the climb. After a couple of shots she was already a hundred metres ahead. We have two modes of walking; German, which is a strident march, or Sicilian, a gentle amble. Normally we discuss these things but if it’s left unsaid then its the German and I toil along behind. She is strong, fit, and sixteen years younger than me so I have a tendency to bring up the rear – the Lantern Rouge of our expeditions. “You alright?” she shouts back occasionally as the gap widens. She’ll often backtrack to rejoin me, kind but not good for my self esteem. After half an hour of walking through soft but not sinking bog we started on a steeper gradient to the first of a series of three crests leading to the top. After an hour we were approaching what Ross referred to as “the tricky rocky outcrop”. At about fifteen hundred feet the wind had picked up and it was difficult to communicate. It was here that Jo grasped the pinnacle and told me that she wasn’t as fond of me as she used to be.

With mountaineering bravado I said “Let’s push on to the summit”. Just saying it made me feel so much more competent, but just beyond the rocky outcrop, the wind made me feebly stumble backwards. Regaining my footing, I saw Jo striding ahead. Despite the relentless wind and a false summit two thirds up, the last ascent was pretty easy going. I hate false summits; you look up and think that’s the top, all you can see is the sky and the appearance of a summit The closer you get to it the more convinced you are that it’s the top. You up your pace just to get it over with. And just as you reach level ground you see a short ledge and then another long rise to the real summit.

I caught up with Jo at the top, we hugged, kissed in mutual congratulations, and hunkered behind the cairn.

Out of the wind it was very pleasant and we recovered over a snack of apples cheese and water. I turned my head into the gale and squinted along the ridge to the northwest. I could see a tiny figure in the distance, heading in our direction. Then another, and another. I pulled out my binoculars and focused on a group of seven hikers walking towards us – in shorts! “We’ve got company.” I said. She laughed. “No way. Who?” “A group of young lads by hte look of it.” She grasped the binoculars. She laughed again. “My god they are wearing shorts,” she said. “They must be freezing.”

Twenty minutes later the first of them, a rugged bearded young fellow arrived at the summit cairn. He strode towards me with arm outstretched. “Good morning” he said. “Bit blowy up here.” We shook hands and he told us that his small team was tackling, as prescribed by the Scottish wilderness hiker Cameron McNeish, seven Munroes in one hit. “Wow.” I said, “seven Munro ascents? How long is that going to take?” “Oh, just a day.” he said. “a long day”. I was confused. How could it be possible?. “No, no” he said. “We climb to the first Murno summit then we hike along the South Glen Shiel ridge that connects to the other six. It’s seventeen miles. Then we descend from the final peak.” His fellow hikers were arriving in ones and twos. We hailed each other as great friends. They were splendid examples of English youth; Jo was very impressed. She believes that most young people are indolent device addicts or just addicts. She may have a point but these boys were bucking the trend. “What’s the going like along the ridge to that Munro?” I asked pointing. Jo glared at me. “Bit narrow in places,” he said shrugging his shoulders nonchalantly. I quickly rejected any idea of joining them. We took photographs around the cairn and wished each other luck. Half an hour later I saw them, tiny figures highlighted in the snow, traversing another ridge. 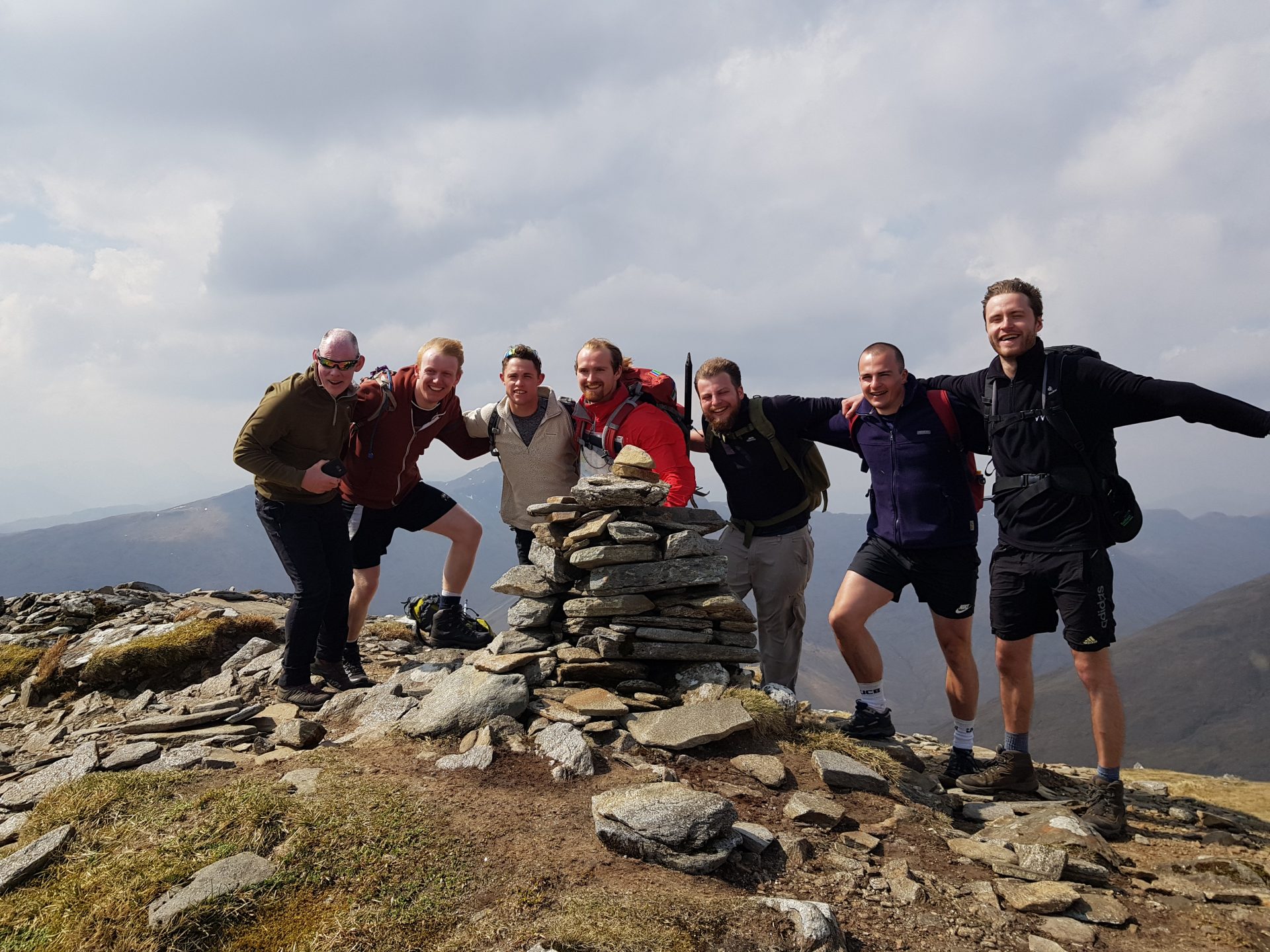 Descents can be trickier the ascents. On one of our early climbs together in San Antao on the Cape Verde islands, I slipped and slid down a bank of scree. Jo nursed me to a first aid station in the valley below where a gash in my arm was stitched with thick cat gut. I proudly bear the scar. The descent of Maol Chinn-dearg was fast, the wind steadily diminishing. Despite being tough on the knees, I enjoy descents. I can take in the panorama and my chances improve of keeping up with Jo. I could see her weaving down the mountain, occasionally lost from view. For some minutes I couldn’t see her, I thought I’d wandered off the path. Then I was upon her, lying at the side of the track in a soggy patch of gorse. “Hey Jo, what’s up?” “I fell,” she said. She glared at me. “You ok?” I asked.. “Yeah I’m fine, soft landing. Here, help me up” She reached out and I pulled her up. Feeling her behind with both hands she grimaced. “I am soaking” she said “absolutely sodden”. I held her to me. We hugged. “Nearly there. You can put the passenger bum warmer on max. This has been ok hasn’t it?” She smiled “Yeah it’s been really good.” “We’ll celebrate with a couple of large malts” I said.

In the car heading towards the pub in Plocton; warmed by the sunshine and the seat heaters, we reflected on what was actually not a very long walk; just four and a half hours including the rest at the summit. “We should do another Munro.” I said “Not today,” I quickly added. “But when we visit Scotland again.

You’d be up for that wouldn’t you?” I glanced at her from the driving seat. She was looking at me intently, thinking. I honestly can’t recall if she replied.