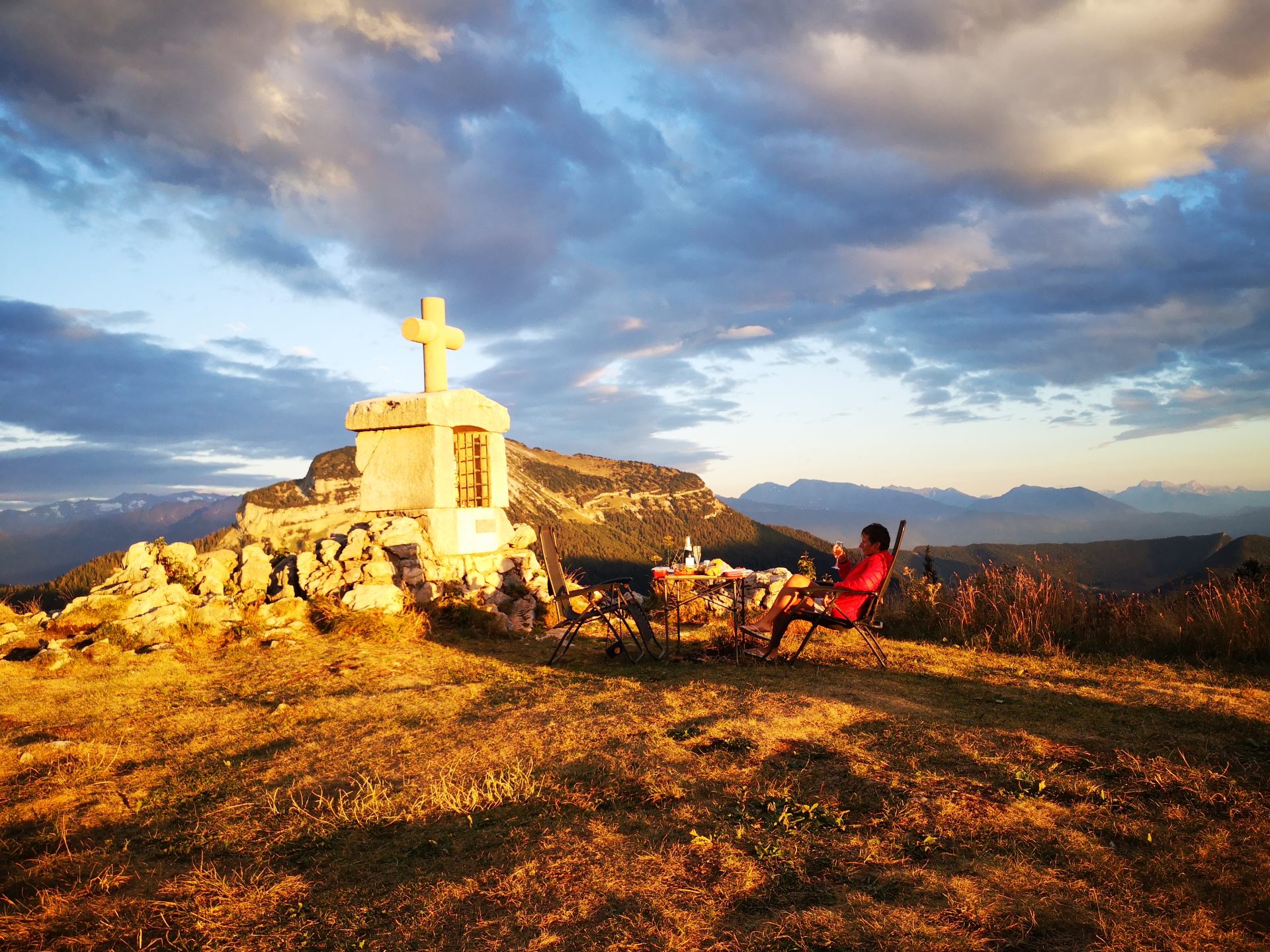 Van life in the Savoie and into the Vercours

The Savoie is a rustic and fiercely independent region that was annexed to the republic of France as recently as 1860. Today its citizens have aspirations for a return to some form of independence. All this useful info’ is imparted by a French woman we meet at the outdoor laundromat in a Carrefour supermarket car park. She’s a local English teacher and an anglophile, who’s second love is Yorkshire.

Savoie sits to the east of the river Rhone. The department of Ain is immediately to the west. You’re washing your clothes in Ain, the English teacher tells us, where I live and where property is cheaper, but across that bridge over the Rhone you’re in Savoie. 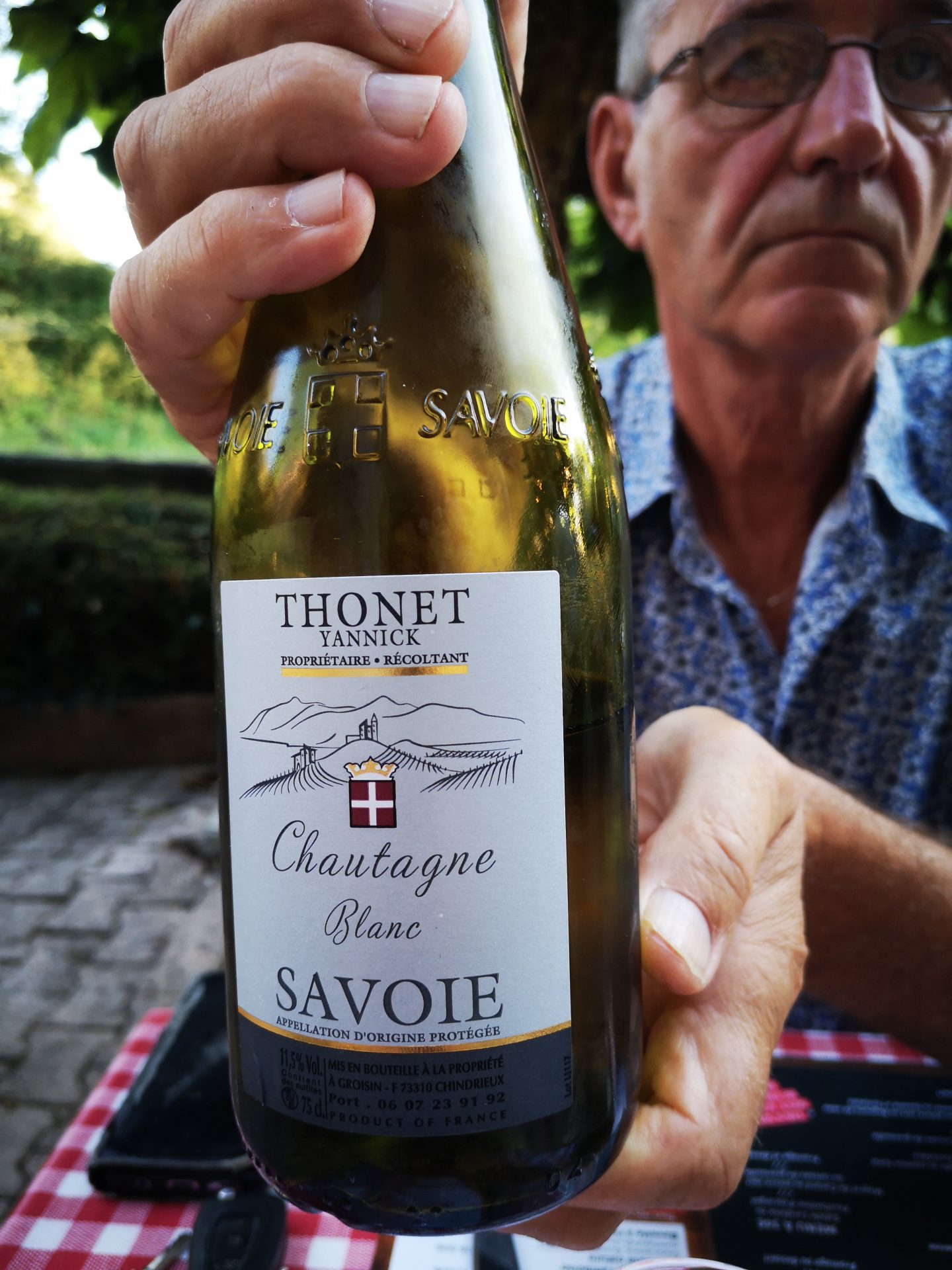 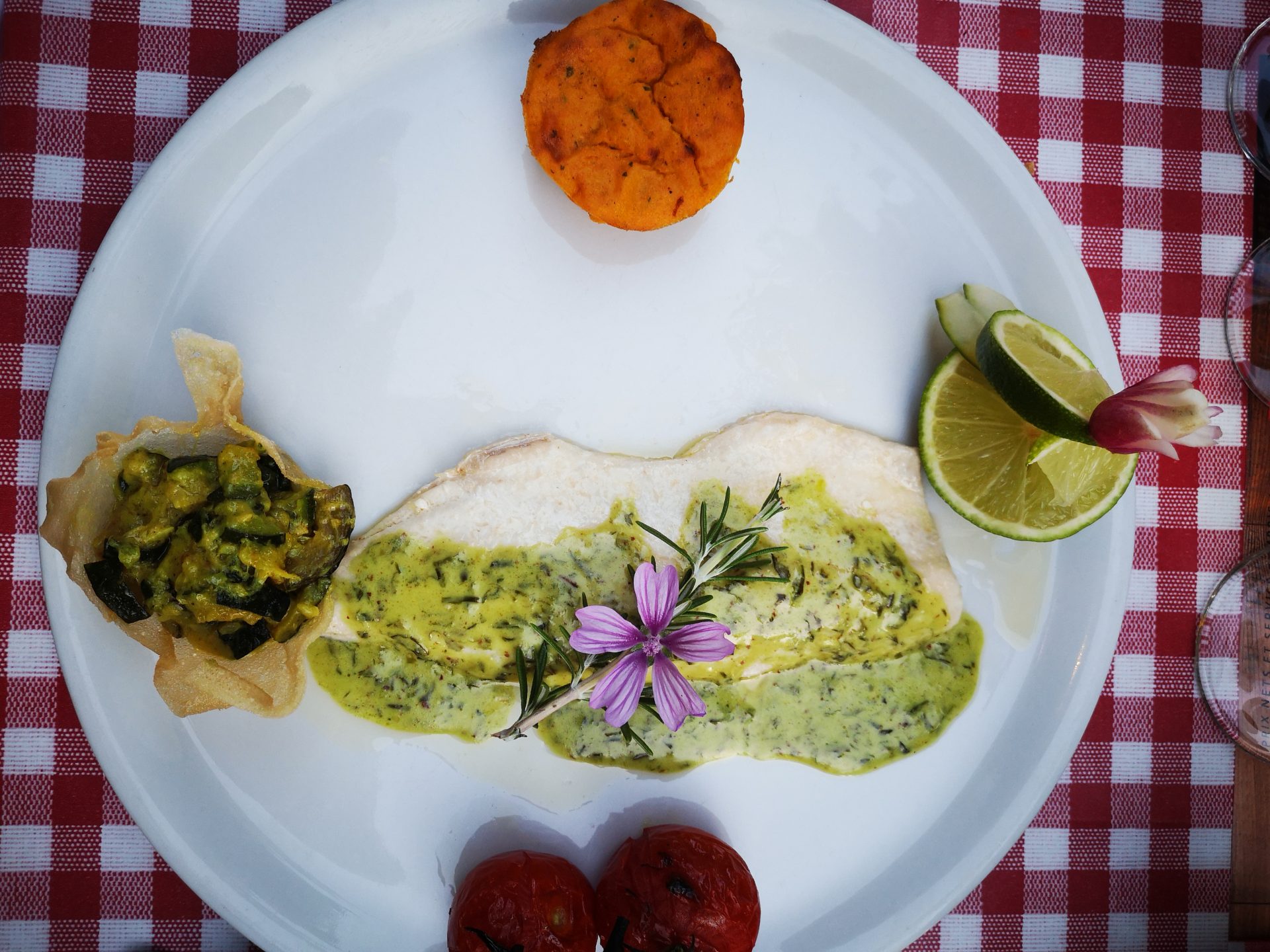 We are winding up through the hills when, at a sharp bend Jo sees a pretty restaurant with a big terrace of tables decked in red and white chequered table cloths – a quintessential rural French restaurant. I’d like to eat there, declares Jo. But there’s a car behind me on the narrow winding road and we must move on. Let’s see some more of this region I say. I like it. We can always return.

We stay overnight at the viewpoint above Lac de Borget, the biggest lake in Savoie and the next day we retrace our route to find that restaurant, but we can’t locate it. We crisscross the hills for an hour and its mid afternoon before we see it on the bend. It’s called Le Ferme du Bulle and,  this is very odd, claims to double up as a disco. We park in the shade of a big ash tree in their car park with a view down to the village. A table is booked on the terrace for this evening and they’re happy for us to stay under that tree overnight. After a vantastic shower and a change into fresh clothes, we’re at our table in the evening sunshine at opening time. We both order fillet of fish from the lake. The food and the Savoie white wine is fabulous. Mostly we eat quality food prepared in our van kitchen but under the constraints of our budget we restrict ourselves to eating out once a fortnight. So we’ll be very choosy where we eat. This is not as easy as you might imagine. I can summarise the French rural restaurant scene as Michelin (or prices and pretensions in that zone), Macdonalds (the big M is everywhere), or Mozzarella (pizza is France’s favourite eat out food). The French don’t eat out like us Brits so good local fare at sensible prices is hard to find.

I’m a big fan of bicycles and there are lots of cyclists in these hills. But I’m a bit perturbed by the large number of lazy youngsters riding electric bikes. And they’re using battery power on the slightest of inclines, even on the flat. 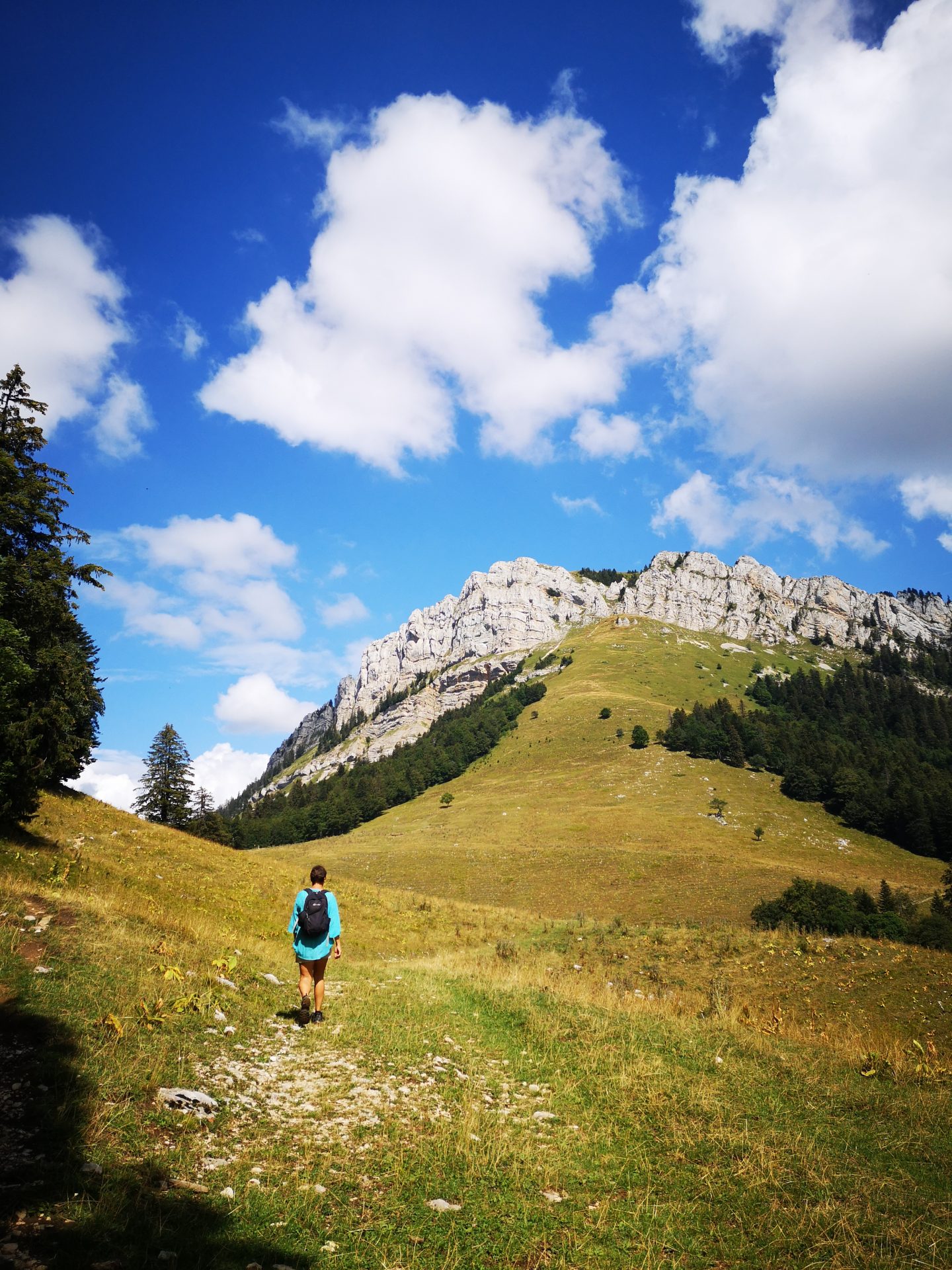 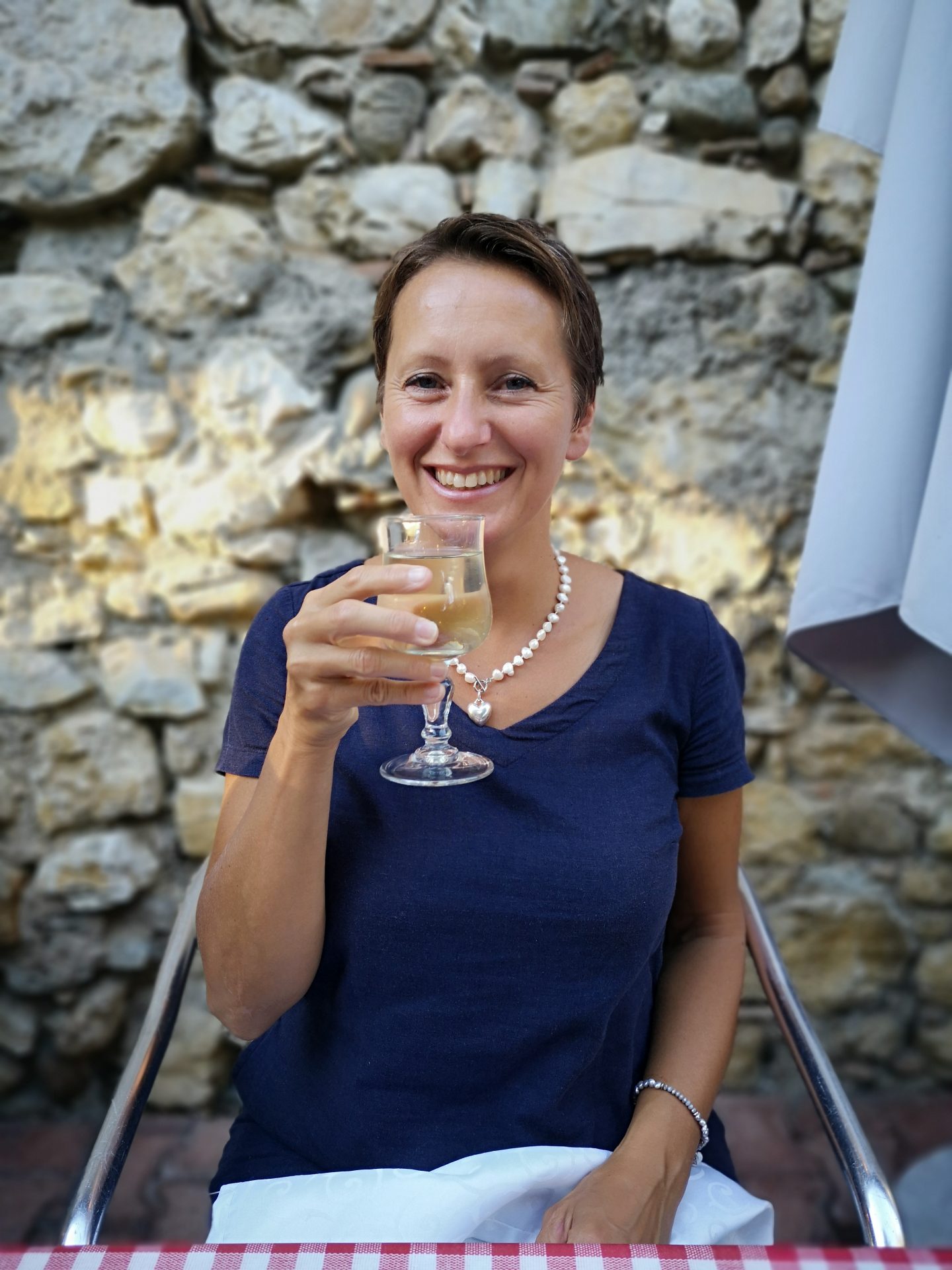 We’re staying overnight in a vast carpark adjoining a closed, out of season ski lift. In the morning I hear the rustling of what I think might be a big bird in the woods so I grab my binoculars and quietly approach. This animal is disturbing some big branches but it’s well concealed. I wait and watch patiently until it climbs out onto a long bare branch. It’s a creature I haven’t seen since I was a boy in Wiltshire; a red squirrel. It’s bigger than our grey squirrel and considerably more attractive; a lovely russet brown coat with a cream underbelly and long pointed ears. He’s busy stripping bark. What a delight for him, and for me!

We’re on the D921 travelling south through the Chartreuse in the late afternoon sunshine. It’s such a beautiful alpine road. We’re in the mood, landscape and temperature for some hiking. We find ourselves in a wide valley next to what must be the finest eco toilet in France. Here we do an 8 mile circular walk with a stop for coffee halfway. The following day we hike from the Chartreuse monastery for 8 miles up to the Col de Rochere. And the next day it’s a 4 mile hike from an Auberge restaurant to the Charmant Som summit where there is a splendid view of Mont Blanc – and a small flock of black Alpine Choughs, one of which devours the remains of Jo’s juicy pear. Then without respite, the next day we do another 8 mile tramp but now it’s extremely hot and the map we bought is rubbish – it’s actually 11 miles and the second half is along deeply rutted logging tracks. I’m tired now and we agree on a few rest days.

On an early morning drive out of the forest we impulsively stop next to an Alpine Ski Centre on a hillock overlooking a field of bell clanging cows and the village of La Ruchere. We slumber, sunbathe, sleep and read here all day – and stay overnight. The next morning is spent leisurely doing not a lot before moving on – rest days have been granted!

I saw a beautiful grey and red bird called a Wallcreeper on one of those hikes and as you might expect he was, with long slender claws, creeping up a wall – actually a limestone rock face. And on the first rest day I spotted a beautiful Redstart, an uncommon bird in the UK.

I have another important rule: Rule 7: Visit the Boulangerie/Patisserie every day for a small baguette, because, after 12 hours a baguette acquires the solidity of a truncheon.

We have a difficult day shopping. First we top up with fuel but the diesel pump is not dispensing properly. It takes forever to fill up, and despite Jo’s imprecations I stubbornly persist. The Intermarche supermarket, a store we will not use again, is like Asda on a bad day, the food quality is poor and it’s full of people who don’t give a toss about antisocial distancing. A respite is achieved in the afternoon by driving through the dramatic gorges of the Vercours national park where we wind along narrow mountain roads with scary vertical drops and tight hairpin bends. As evening approaches we leave the main road and climb up a steep narrow lane onto a flat open clearing on the summit. It is grey and overcast, the wind is howling and its damned cold. But it’s our camp for the night so I light a big fire and open a warming bottle of cognac, of which I unfortunately drink too much, and after what seems like a dismal day the mood is soured.

The Vercours has an interesting, contentious and ultimately tragic Second World War history. In a larger context France was a nation bitterly divided: a significant part of the country in the southeast was not occupied by the Germans; called Vichy France, it was ruled by a German appointed French Marshall. At worst this region collaborated with the Nazis and at best it was indifferent. Paris and the north was occupied by the Germans and a small faction, the Free French under General De Gaulle attempted, with ninimal success, to influence events from London.

As the war progressed, the plight of the French people became gradually intolerable; forced deportations for slave labour, plunder of goods and food, persecution of Jews and other minorities, and the inevitable indignity of occupation. There was a resistance movement, particularly in the north, that, with the support of the Allies attempted to thwart German rule. But despite great individual courage the resistance was never going to significantly challenge the German domination. 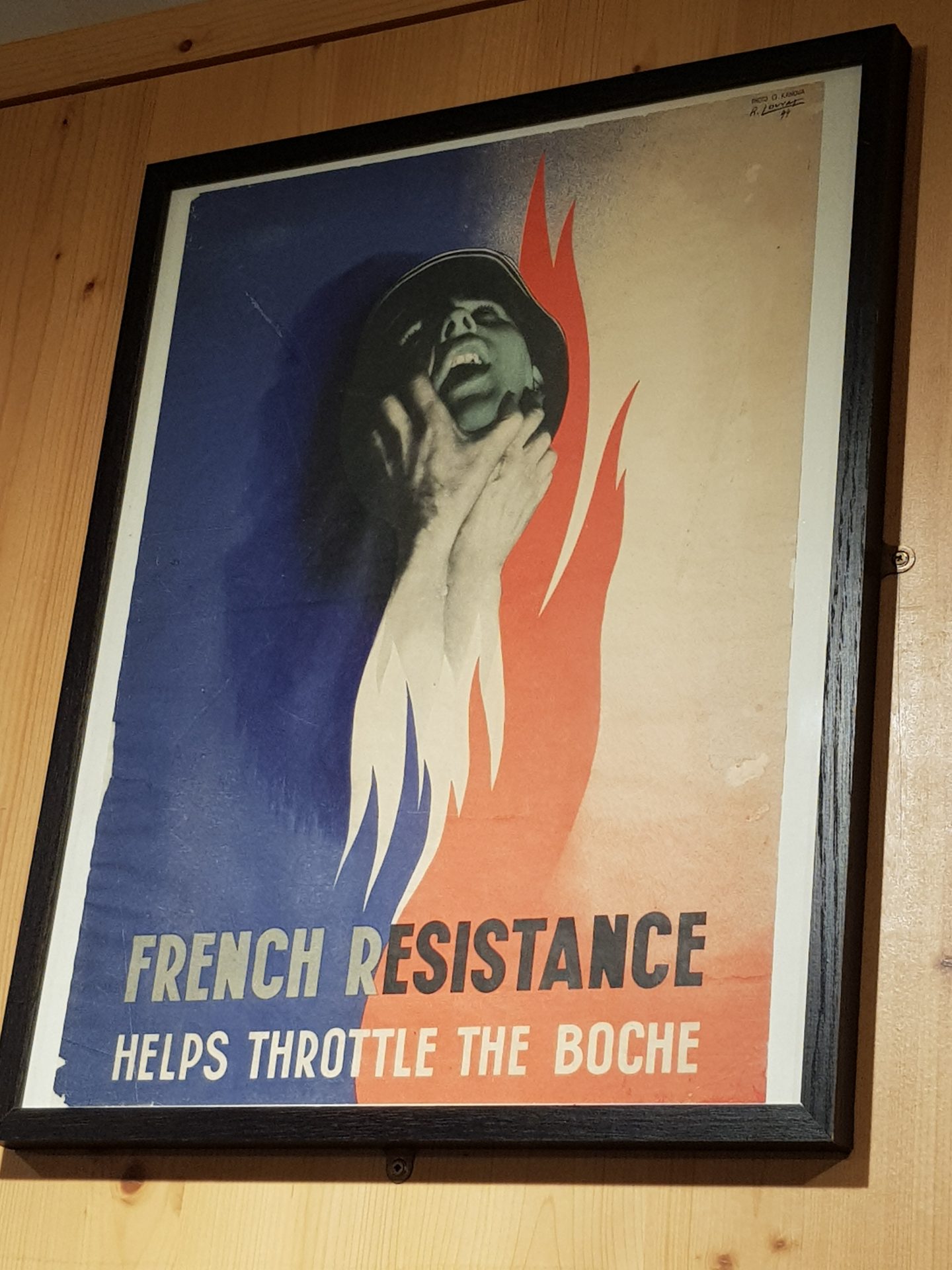 In 1943, in the Vercours, a few hundred young men, escaping deportation to the east were organised into camps in the mountains with a plan to resist the Vichy government. They were called the Maquis. Despite Allied support in the form of training and airdrops of equipment they were never an effective fighting force.

On 6th June 1944, the British, US and Canadian forces landed on the beaches of Normandy to commence the liberation of Europe. In July thousands of enthusiastic young Frenchmen, realising the possible impending defeat of the Germans, joined the Maquis in the Vercours mountains. They wanted to fight but they were poorly led and it wasn’t possible to properly feed them, let alone arm and train them. They sealed off the region and declared it to be part of the French Republic in the north.

Despite the massive assault against them in Normandy, the Germans responded with characteristic brutality against this ramshackle insurrection in south eastern France. On 21st July 1944, a force of 10,000 Wehrmacht soldiers invaded the Vercours mountains, overland from the north and with paratrooper drops in the south. The Maquis were wiped out.  German revenge was cruel and barbaric; the Maquiscards and many ordinary civilians were summarily executed and there was a notorious incident in a makeshift hospital in a cave where the wounded, their doctors and nurses were all shot.

The French were dismayed at the lack of Allied support but any intervention would have been reactive and doomed to failure. After the war, the disparate bickering French factions argued amongst themselves about how to formally remember the Maquis. There are now moving memorials around the region and a splendidly informative museum. But I’m left with an overwhelming sense of the futility of it all.

The next day we drive through the Combe Laval where I can appreciate the geographic isolation of the Vercours. It is quite spectacular; huge limestone rocks overhanging narrow roads cut into the sheer cliffs and a series of tiny tunnels, entry to which is controlled by traffic lights which nobody seems to obey. This is a French Balcony Road and it features on dangerousroads.org. Beyond the gorge we descend into the warmth of a lower altitude and the village of St. Jean en Royanne where we spot a signpost for a ‘Parking Arboretum’ overlooking fields of sunflowers and what I think are orchards of plum trees. Here we spend the night under another mighty Ash tree.

We unpack the Bromptons and cycle to the rock clinging riverside village of Pont en Royans. On our return, we spot s sign for a road that climbs 17km up to a peak with the splendid Pink Floydish name: Col de Machine. We cycle part of the ascent but today I’m more interested in visiting the Patisserie back in the village and the ascent is abandoned.

Tomorrow we’ll drive into the south of France, or, confusingly for us English, what the French refer to as le Midi. 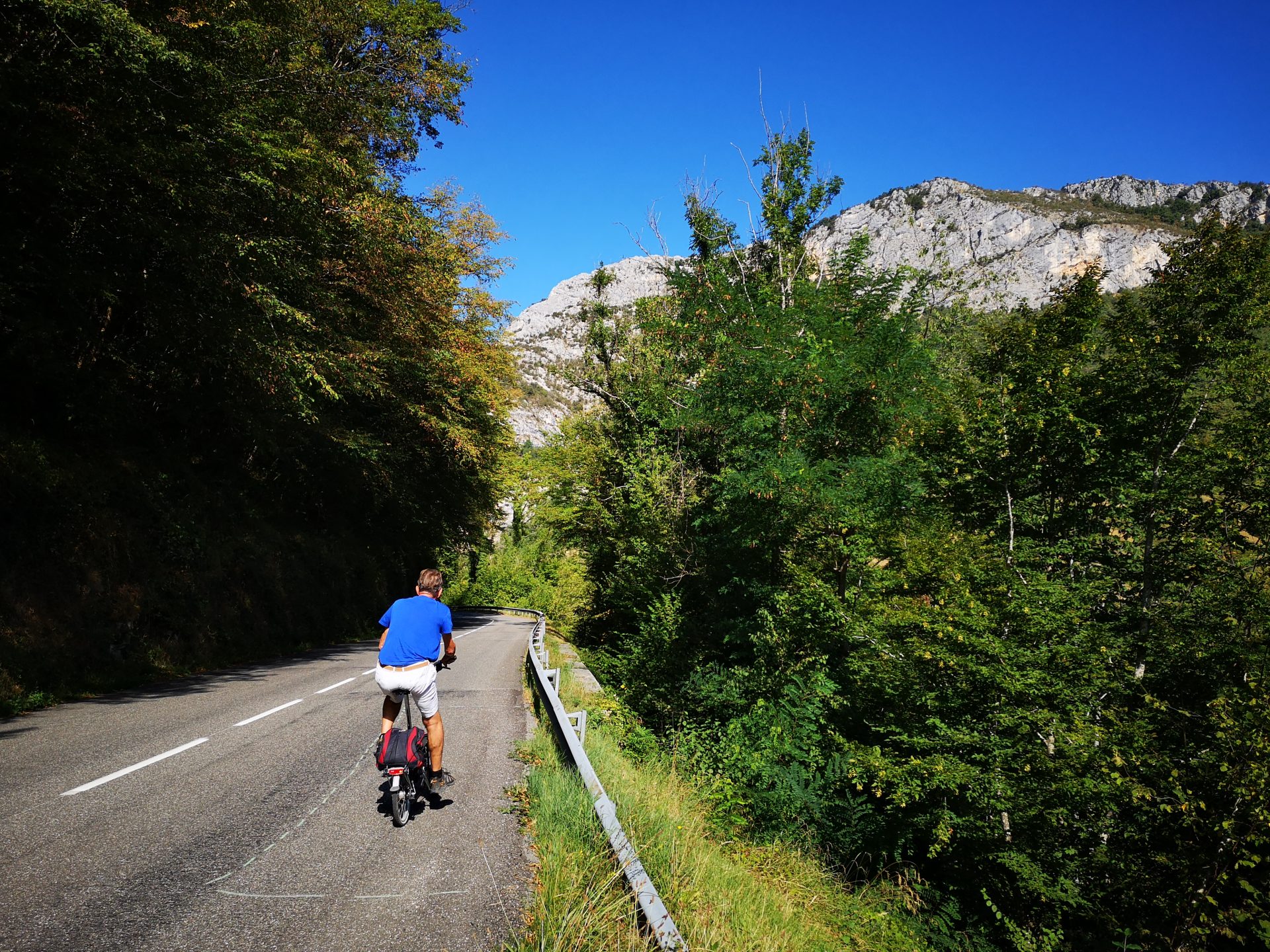 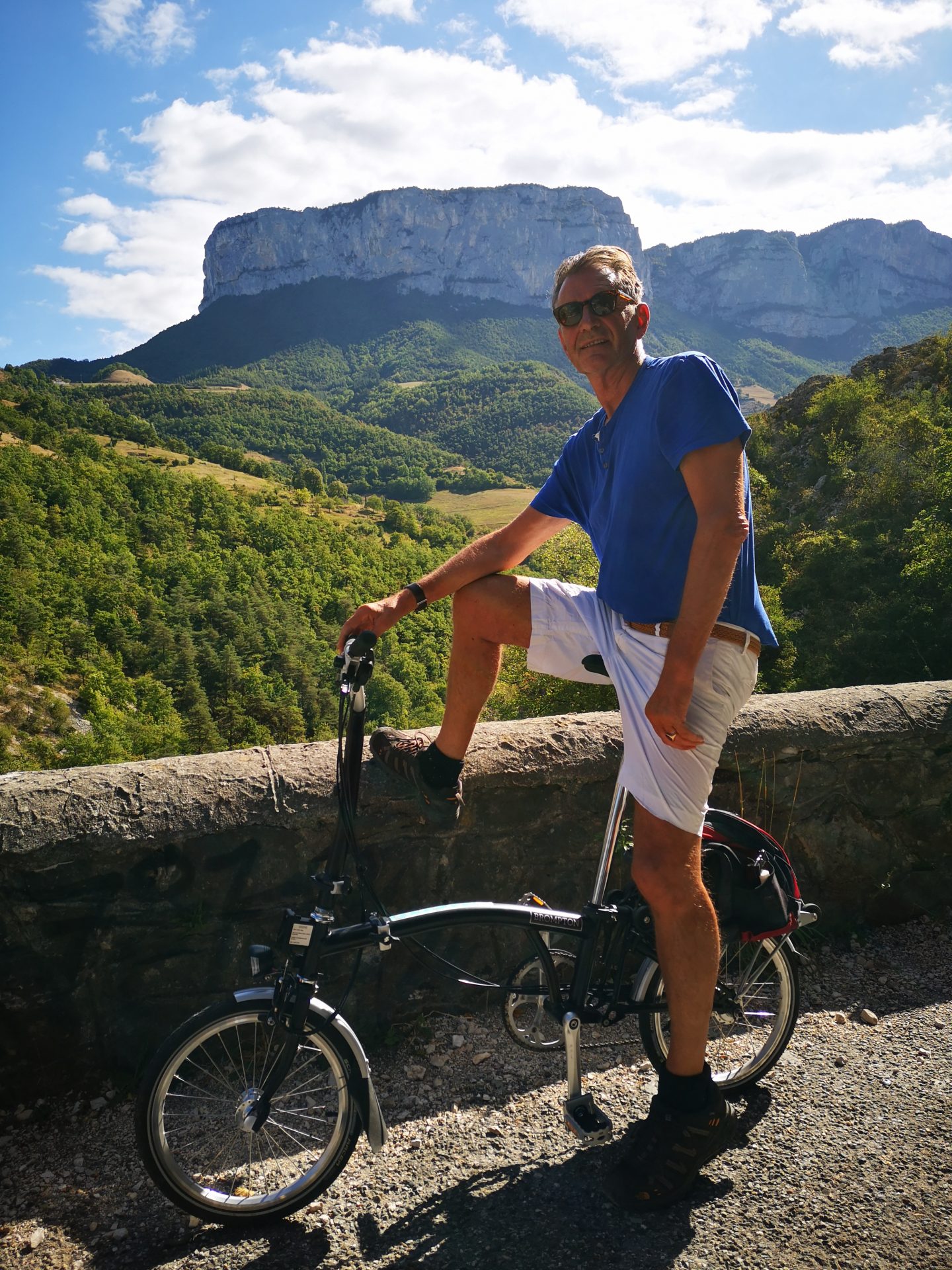