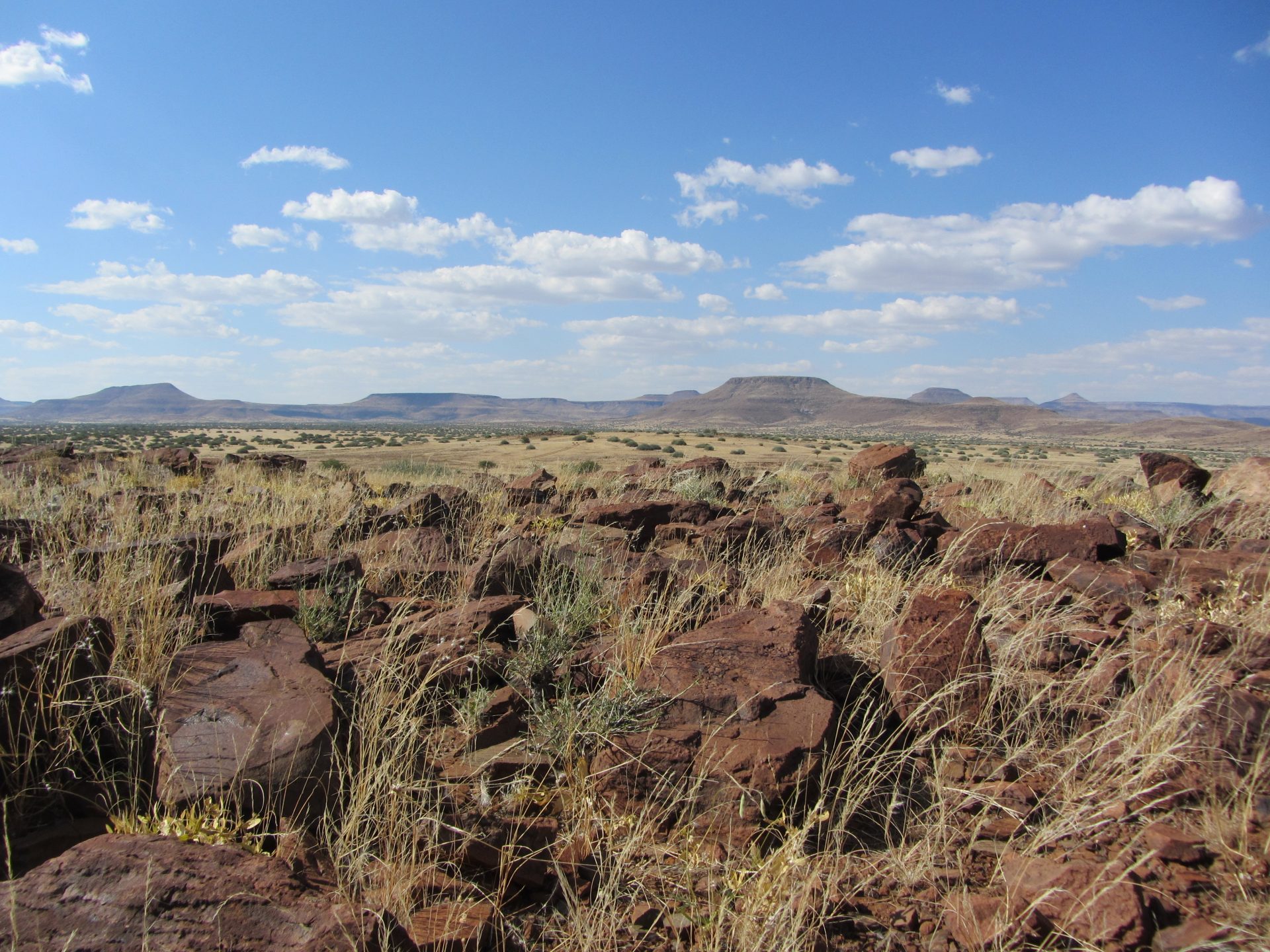 After a morning seeking out desert elephants, we drive further north to Palmwag. It’s a short spectacular drive. We slow down to allow a magnificent male kudu to cross the highway, and just before our destination we pull up at a permanent roadblock. We are at the Vet (or red line) fence, a formidable checkpoint controlled fence stretching east to west across Namibia and Botswana. The aim of establishing veterinary fences in the 1960’s was to protect cattle against foot-and-mouth disease emanating from buffalo and wild roaming cattle in the north. As the northern cattle are primarily owned by black Africans and the southern by white Africans, and as the instances of foot-and-mouth disease are scarce, the fence is somewhat controversial. Regardless of this, we may not bring any animal products (meat, milk, skins) from the north to the south. We’re heading north, so no problem, but we’re reminded to ensure that our fridge freezer contains none of these products on our return journey. 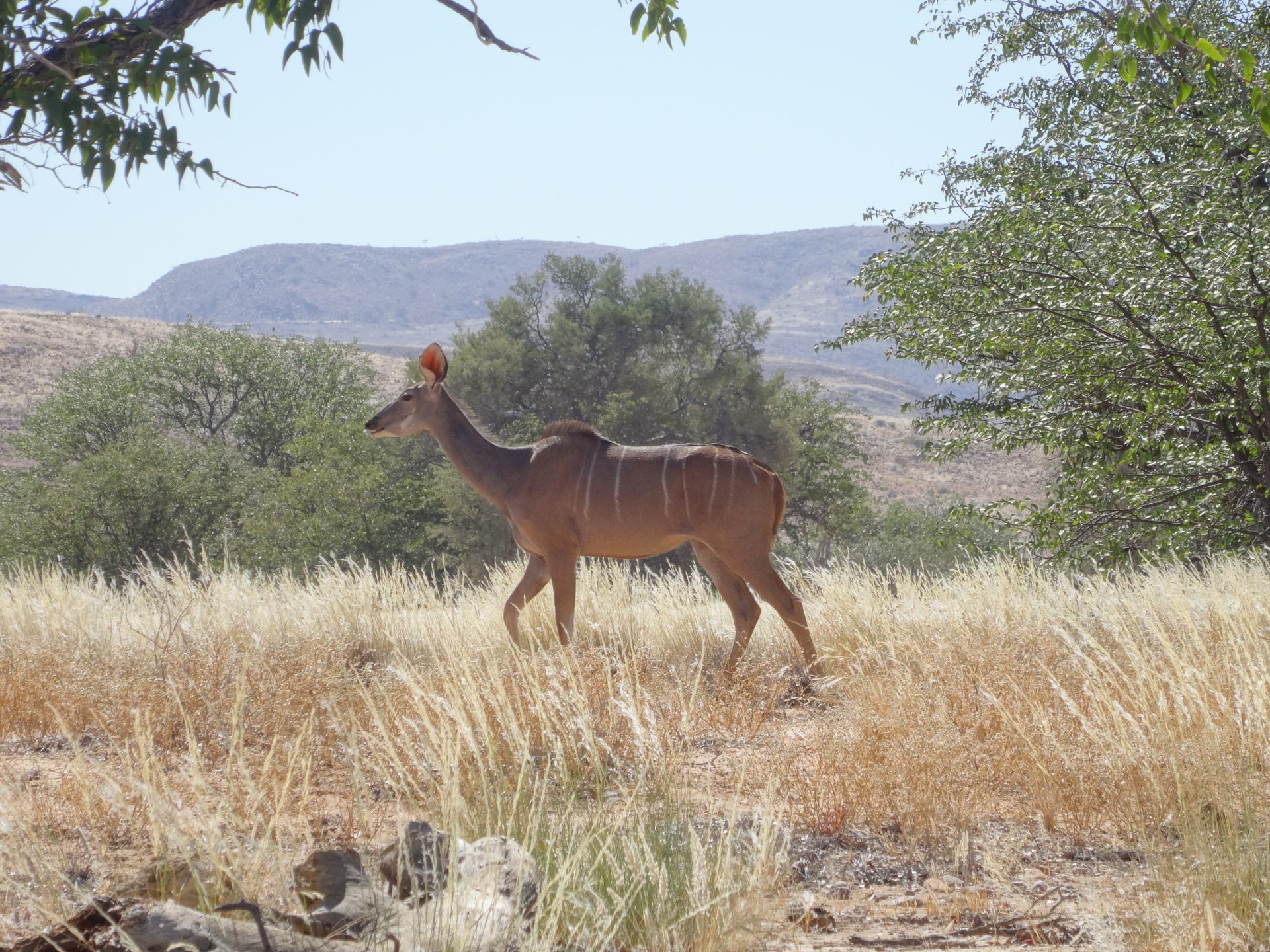 Palmwag lodge is a small oasis on the banks of the Uniab river in northern Damaraland. There’s a restaurant, a palm tree fringed pool, tented chalets and a choice of about twenty numbered camping sites. We’ve been advised (by our old friend Andrew at Desert Homestead) to choose a site away from the pool and main lodge – more chance of seeing wildlife, undisturbed, he said. At check-in we have to sign a disclaimer stating that we will not hold the lodge responsible if we get eaten by lions.This is more like it! We park up at our remote location and break open a couple of cold Windhoek beers. We’re enjoying this in the late afternoon sunshine when a movement some 300 metres away catches my eye. A big bull elephant is slowly ambling past us towards the lodge. Standard procedure I think to myself – must happen every day round here. 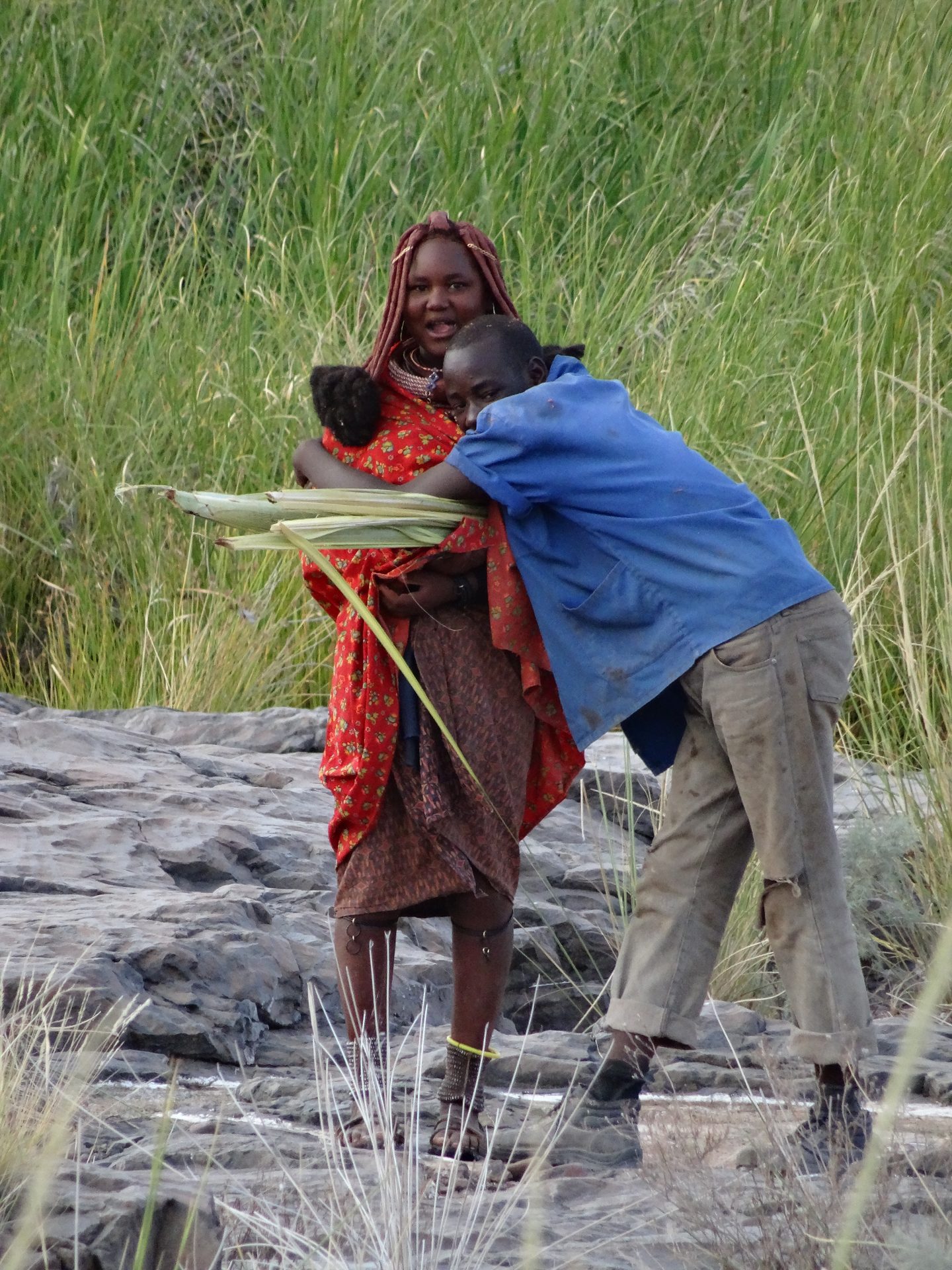 We prepare supper outside this evening – barbequed oryx with squash and carrot mash. The remains of the meal are inadvertently left in a tied up plastic bag outside the vehicle. It’s 9pm, dark, we’re just dozing off but roused by rustling, crunching and munching sounds outside. There’s something out there says Jo. What am I supposed to do? I ask. The noises persist, so I stand up and peer out of the vehicle skylight to see a big porcupine, bigger than I imagined, about the size of a medium sized dog, eating the remains of our supper – apparently they love carrots. With some difficulty I manage to get a reasonable photograph of him. 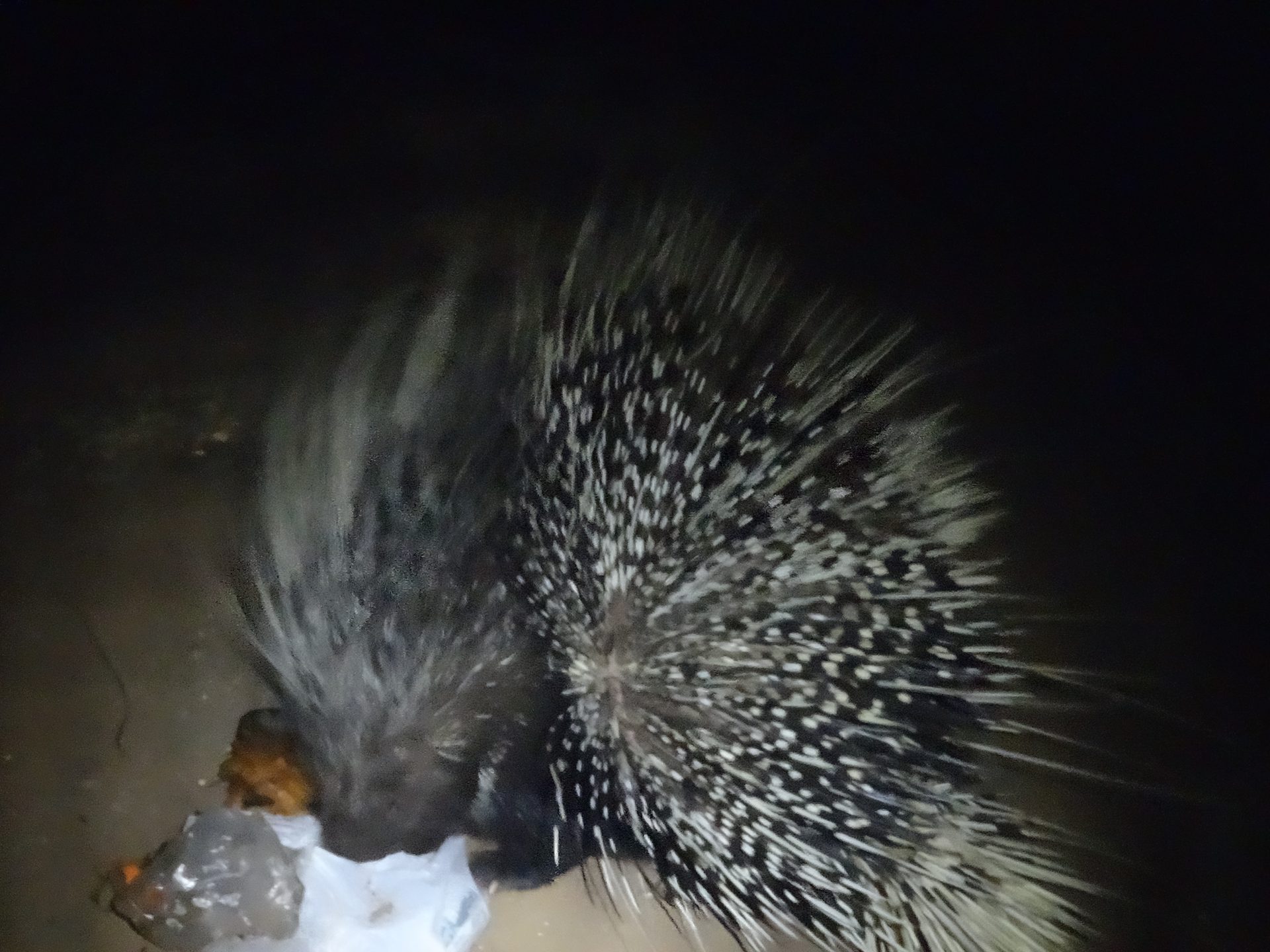 The following morning we’re up at 6am for a tour of the area, on foot, with our guide; a tall, young, friendly Namibian called Eliphas. The surrounding land is fairly flat with many shrubs and occasional clumps of trees and, as always, the sun shines brightly in a brilliant blue sky.  We tell Eliphas of our sighting of an elephant the day before and he expresses surprise. He tells us that it’s very unusual for an elephant to approach human habitation, and that in all likelihood it will have moved on. We walk on, away from the lodge, Eliphas pointing out termite mounds, a yellow scorpion (painful if he stings you but not deadly), and an assortment of interesting plants: welwitschias, cactus like euphorbias with their poisonous milky sap, and a camphor bush whose leaves have an aromatic camphor-like aroma. He looks back towards the lodge, about half a mile away. “Look”, he says, “there is the bull elephant”. I can’t see it – it’s almost invisible in the bush. He points, Jo sees it but I can’t. He points again, and with my binoculars, I locate it. Eliphas has great eyesight, well attuned to spotting camouflaged creatures. “This is not safe now”, he says, “the elephant is between us and the lodge and we must avoid him. We’ll have to take a circular route back. Perhaps he will have moved on later”. Eliphas is reassuring but not unconcerned. He tells us that last year a couple of local villagers stumbled across an elephant in the bush. One of them ran, the other dived to the ground and played dead. The guy that ran was rapidly overtaken and crushed to death, the other survived. “Never try to outrun an elephant” says Eliphas, “despite appearances, they can be aggressive and they move very, very quickly”. 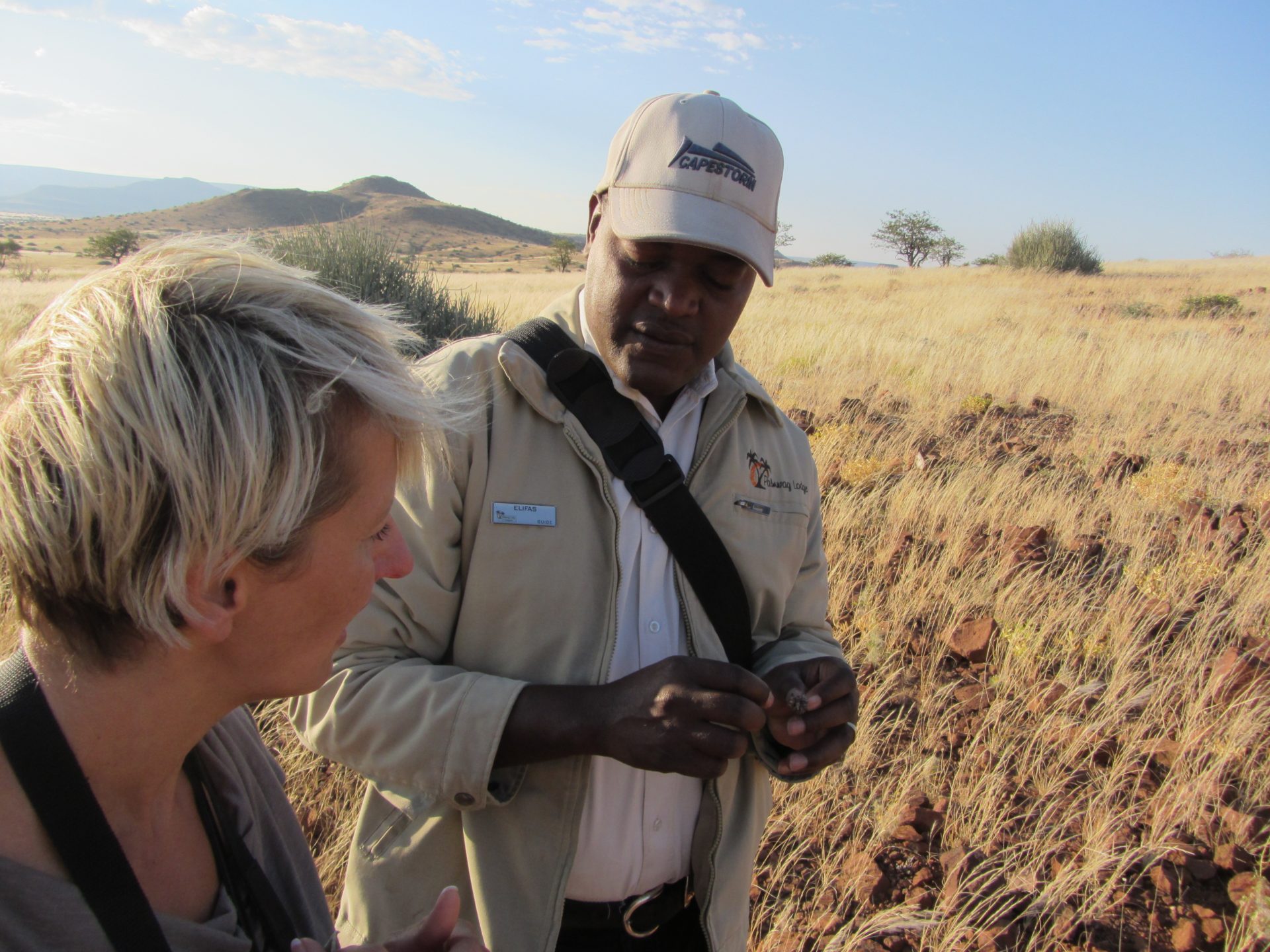 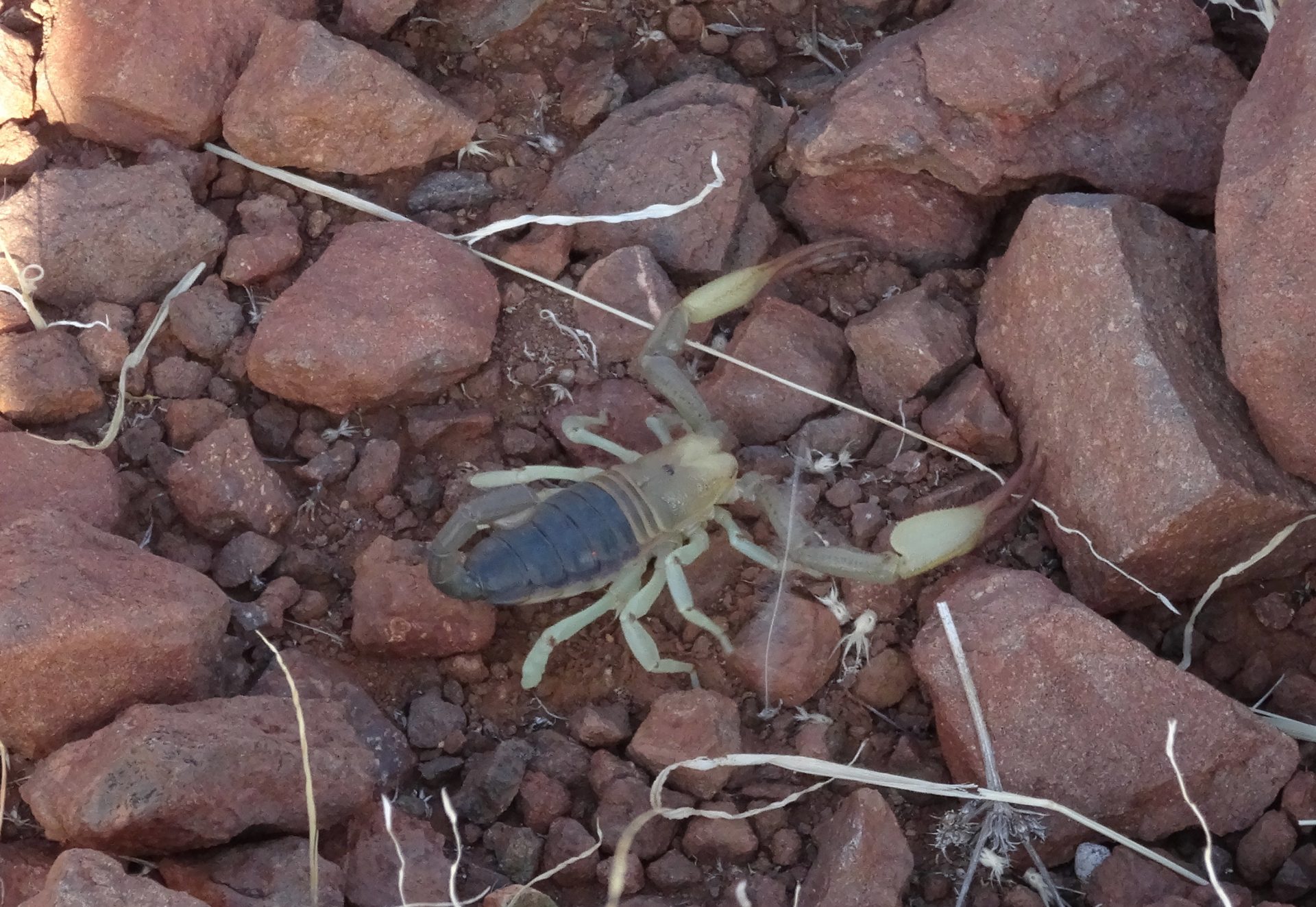 We continue our fine walk and see, once again, a couple of beautiful kudu, and a big herd of Hartmann’s zebra. Eliphas introduces us to a delightful little insect called the Armoured Bush Cricket. They can inflict a memorable bite, squirt their distasteful acrid yellow green blood at you, and, if all else fails to deter you from interfering with them, they’ll regurgitate their stomach contents, covering their bodies with their vomit. I think they are, in miniature, the inspiration for Ridley Scott’s Alien. We see a tiny black and white bird, a white tailed shrike, hopping about on the ground. And at the other end of the scale, an impressive Kori Bustard, one of Africa’s largest flying birds. 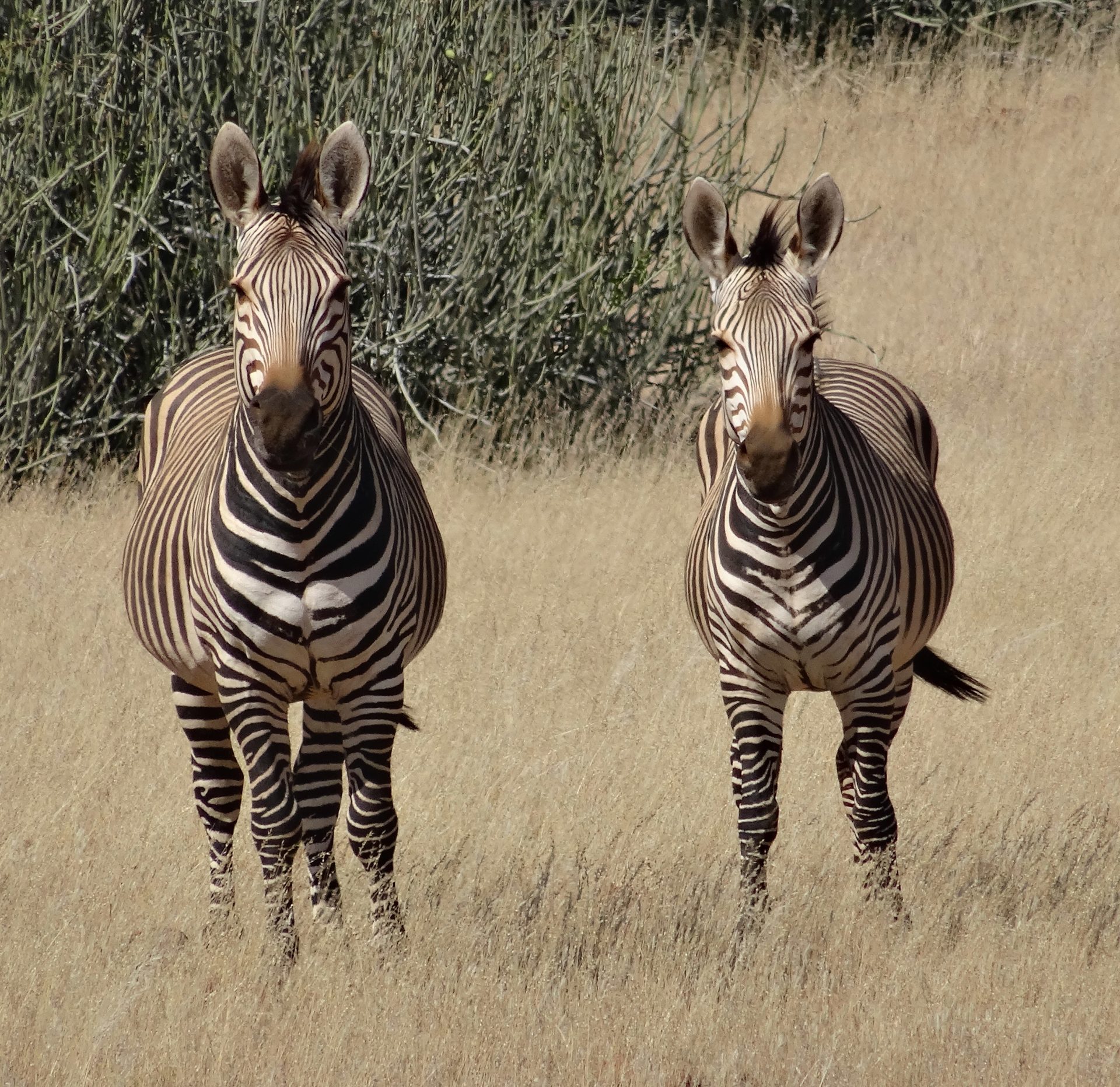 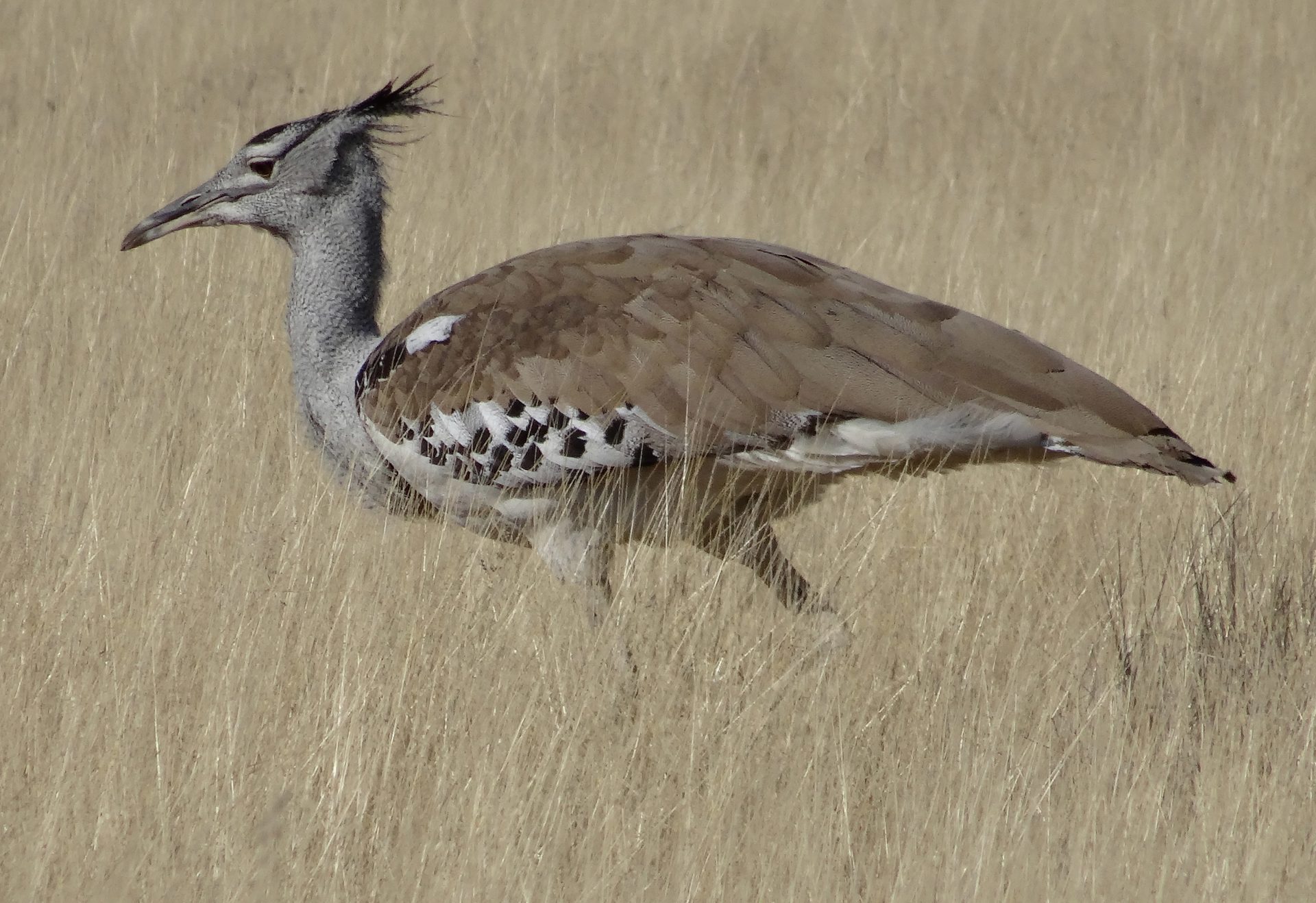 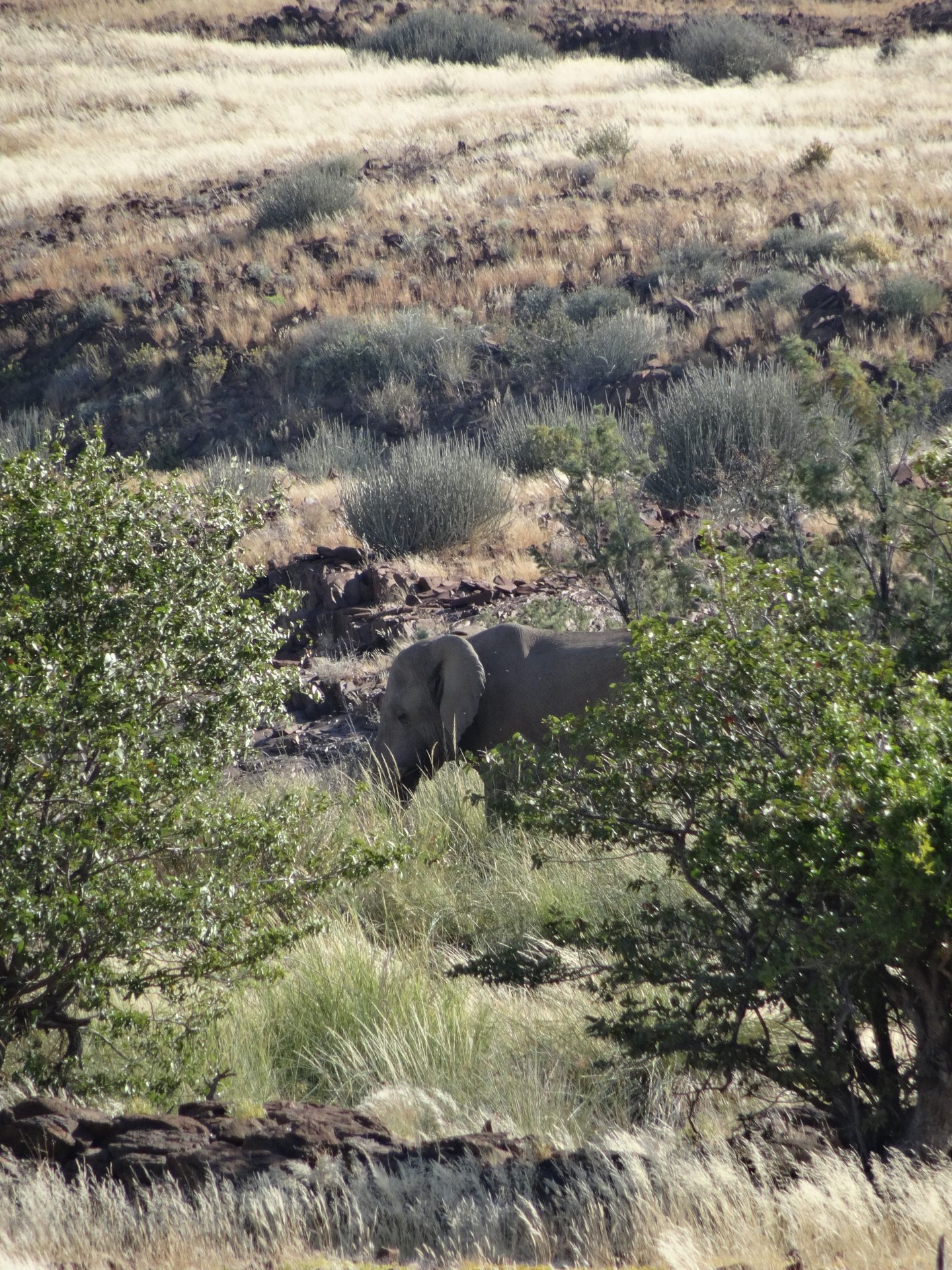 We must return to the lodge. The elephant still obstructs our direct route home – once again I don’t see him, but Eliphas and Jo do. If left to my own devices I’d walk straight into him. Eliphas tells us that we must continue east and quietly walk some distance behind the elephant and hope he doesn’t notice us, or care much if he does. We walk slowly and silently – the big bull is oblivious of us and we return to the confines of the lodge without incident. Jo is disappointed not to have seen a black rhinoceros, but it’s a disappointment that we’ll overcome in the coming days. This trip is settling down to a succession of adventurous encounters – at least one, and sometimes two a day.

In the afternoon we decide to explore, in Sputnik, the area known as the Palmwag Concession.  I turn off the gravel road and take a dirt track that eventually morphs into a rough, sandy, rock strewn trail. “Where’s the road gone?” asks Jo. I’m not entirely sure, and I’m perhaps not as concerned as I should be – it’s an exciting drive. We climb over a raised bank and descend into a dry river bed which we follow for some distance before climbing out onto another track. It’s a big dipper ride – great fun. My confidence has returned after our unfortunate incident back at Sossusvlei. Jo is holding on tight as we bounce and sway all over the place. We stop to allow a big zebra to cross our path. He stops briefly to check us out before galloping off. We race off again, back into another river bed, slowing down for a herd of grazing springbok – lovely slender long legged antelopes with beautiful markings. I find it strange that such an elegant creature has been adopted as the mascot of the burly South African rugby team. After another fifteen minutes I suddenly stop. Ahead of us is a view that encapsulates the magnificence of Namibia. Here it is.

Back at the lodge we plunge into the very cold pool. We’re running out of provisions so we eat in the restaurant and go to bed early to read. I’m reading an outstanding travel classic titled The Sheltering Desert by Henno Martin. At the start of the Second World War, it’s the story of two German geologists in Namibia: Henno Martin, Hermann Korn, and their dog Otto. If they had remained in Windhoek they would have been sent, with all other German nationals, to an internment camp. Instead, they fled into hiding in the Namib Desert. The book relates how they survived out there for two and a half years. How they learned to hunt and find water, to build shelter and make tools. It’s also filled with astute observations about the human psyche, and what it means to be “primitive.” In one passage, Martin writes, “It was about this time that we noticed a change in the subject of our dreams. Animals began to play an increasing part in them and the distinction between human beings and animals became blurred.”  It’s a very moving memoir of two sensitive, intelligent and resourceful young men in a beautiful yet inhospitable environment. 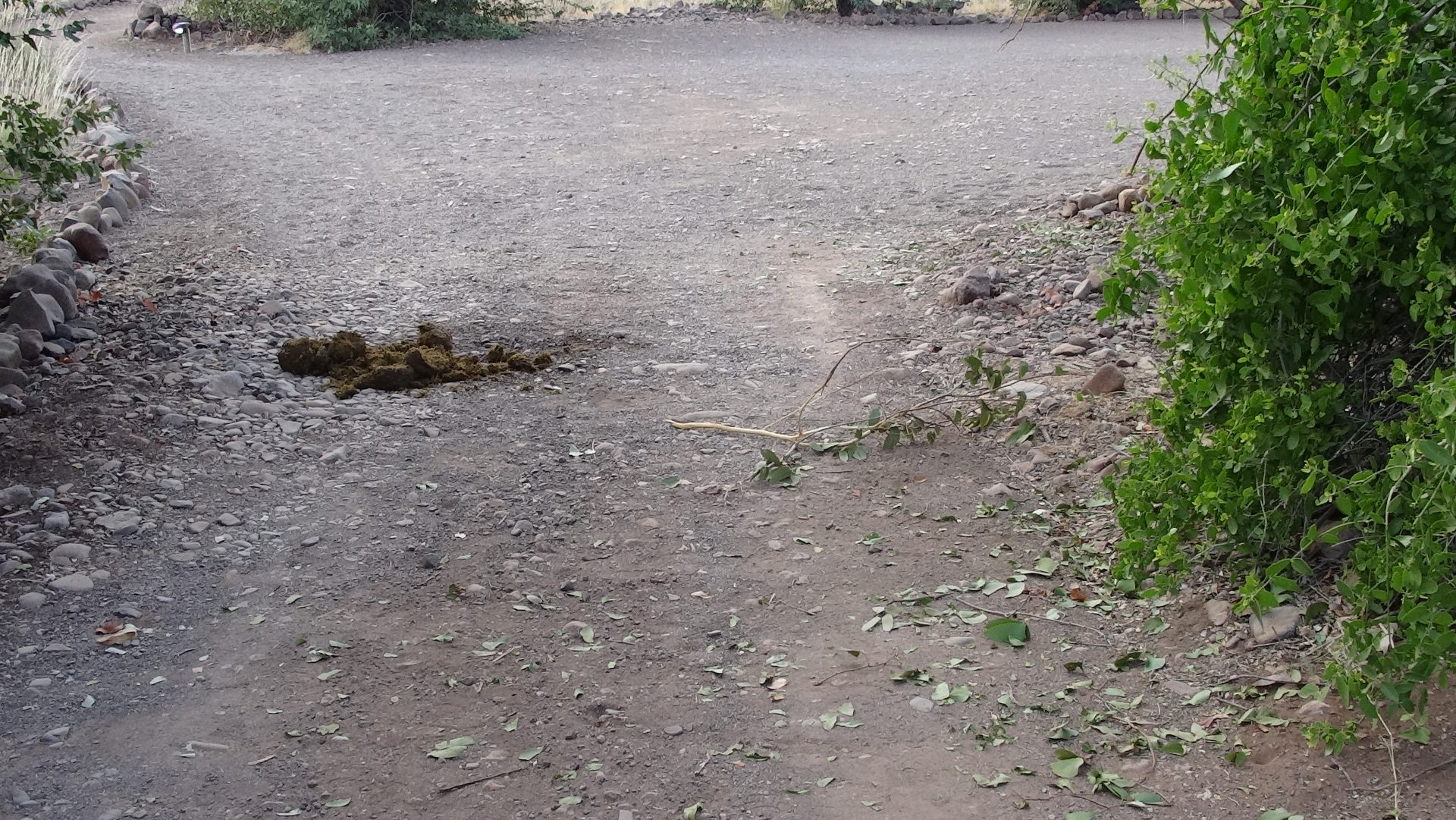 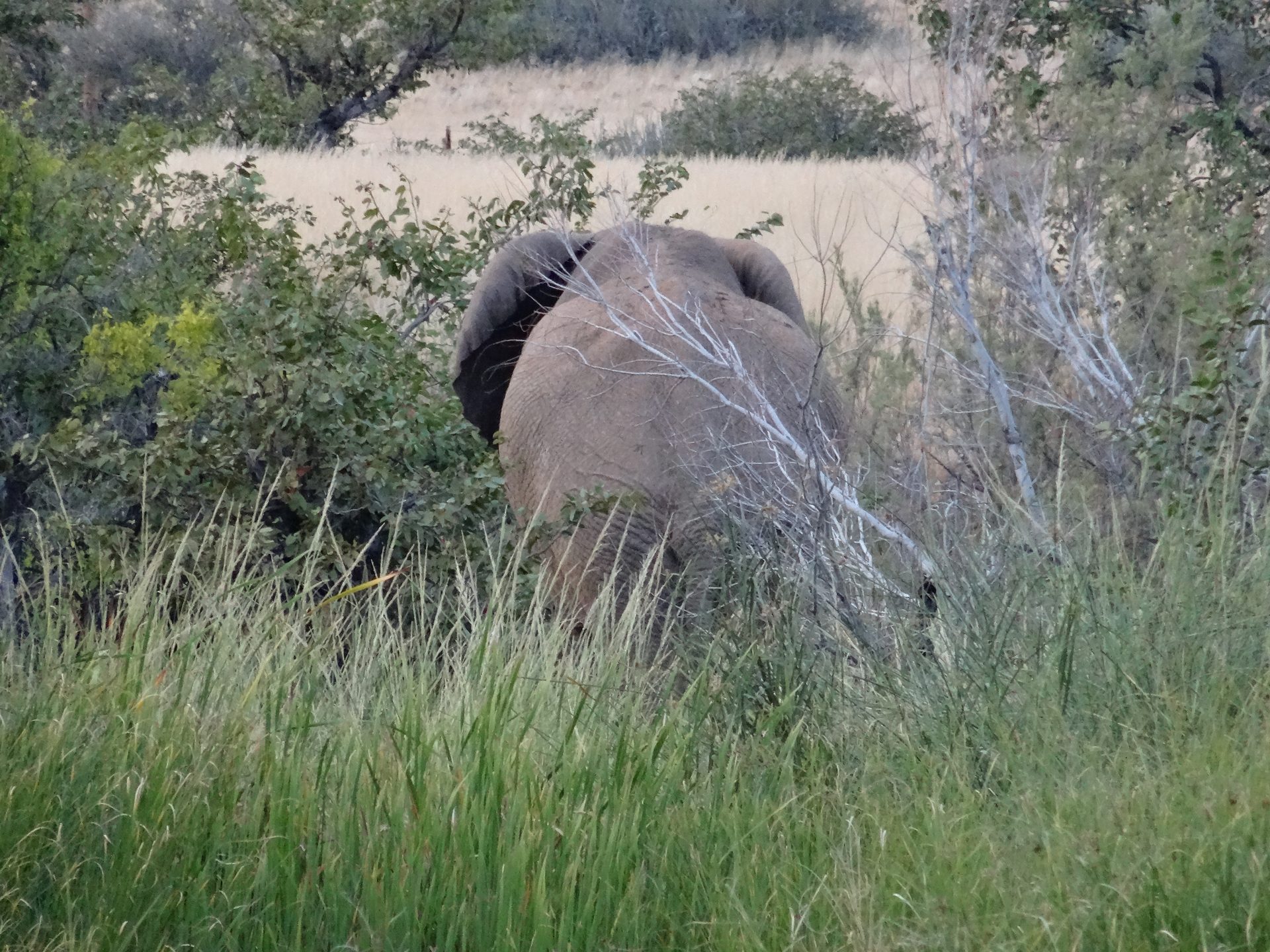 For reasons that are unclear to me, Jo has named the local solitary bull elephant, Edward. The next morning she awakens and tells me that overnight she heard something tapping the roof of the vehicle and rubbing the pop-up and side canvas. We step out of the van, and there, less than 100 metres from us, stands the inquisitive Edward.  We stay close to the door and wait until he slowly moves away. It was Edward that sniffed and explored Sputnik’s roof in the night. His big warm droppings lie around us, and on the track leading to the lodge.  After breakfast, before we depart, we drive to the lodge reception and advise them of their big non paying guest. They seem surprised.

Today we will continue northeast to the outskirts of the Etosha National Park.