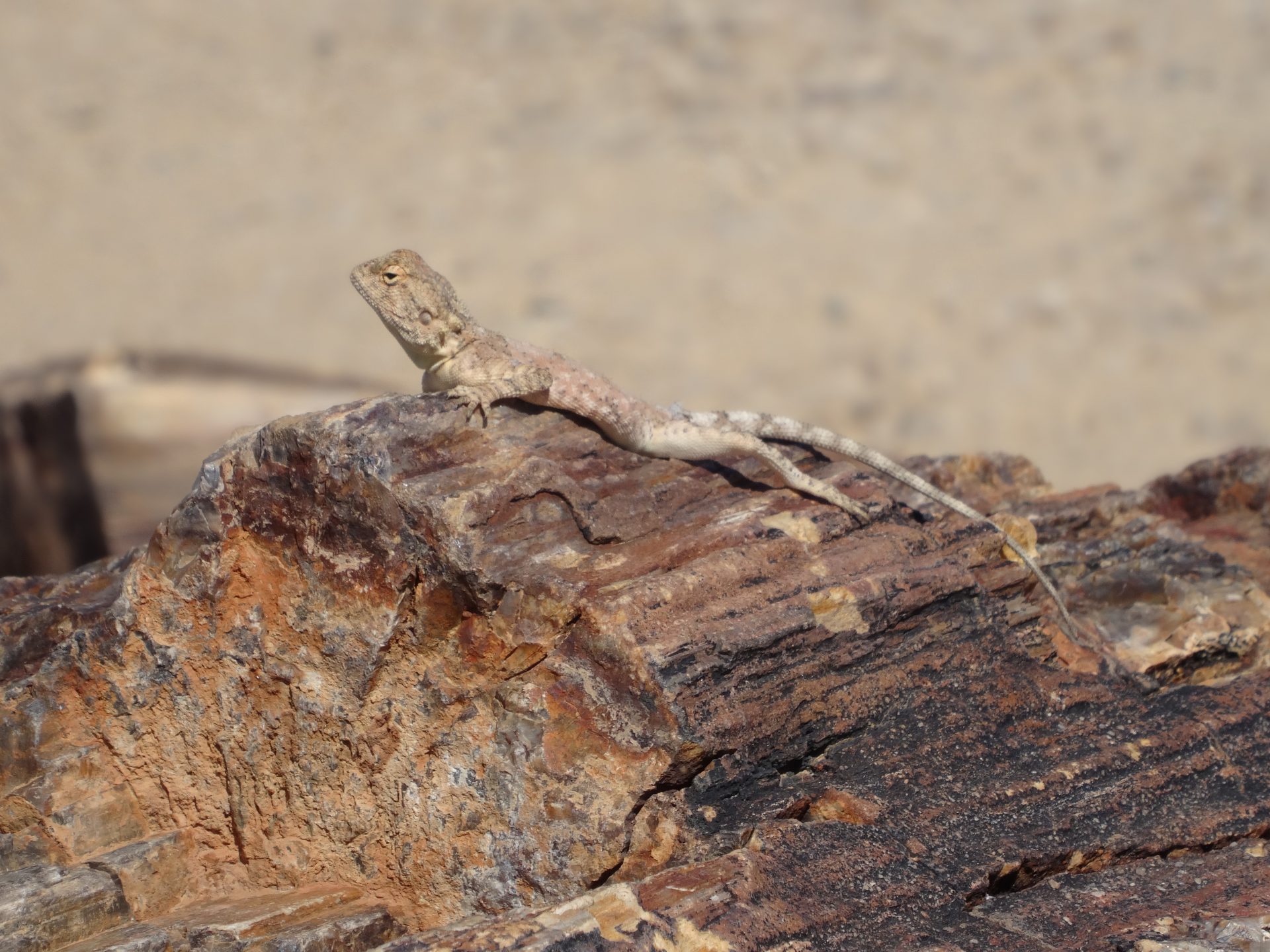 Road Trip Namibia – With a 4X4 Campervan in Southern Damaraland

Aabadi Mountain Camp looks pretty basic but it’s all we need. There’s a shower block, a bar tent and lots of hornbill birds in the trees behind our pitch. Andrew, our young guide at Desert Homestead advised us to join an elephant safari out of a lodge called Camp Kipwe. It’s close to here, so after a late lunch we drive over to take a look. Kipwe is a big circular thatched lounge surrounded by nine rondavels and a swimming pool scattered amongst the rocks upon a hill with a 360 degree view of the valley and mountains. We take a table on the terrace and order a couple of gins and tonic. It’s delightful, until the tranquillity is shattered by the arrival of a coach load of elderly Australian tourists. I really don’t want to be uncomplimentary but this lot are badly dressed, loud, complaining and demanding – wholly unpleasant. One old whinge bag, after complaining about the heat and the stairs, remonstrates with the manager about the timing of the next day’s elephant safari, “It’s too early. I won’t have time to enjoy my breakfast, why do you people have to do these things so early?”. 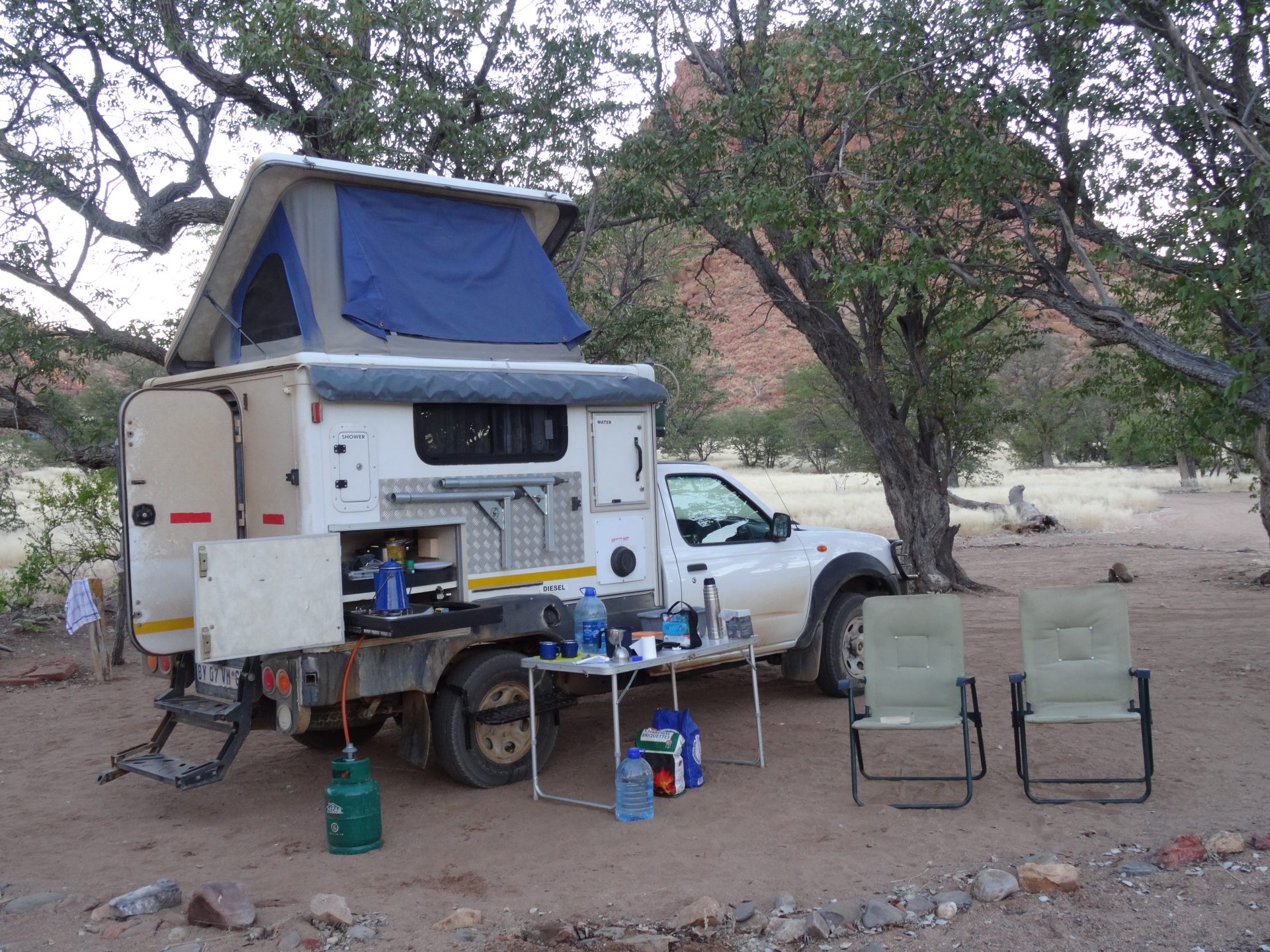 The manager is unphased by this lot. She smiles, and is patiently reassuring. I’d have selected one at random and chucked him in the pool. Thankfully, after a good watering, they all shuffle off to their air conditioned rooms to recover from the bus ride. I ask her if it would be possible to have a guided drive the day after tomorrow to see some of the local rare desert elephants. She responds with a grin, asking if we’d like a private tour or one with the Aussies. She doesn’t wait for an answer!

Big country, small world. Back at the campsite we head to the bar tent for another G&T. Horror, they’ve run out of gin. It’s not a total disaster, rescued by Jo’s catchy phrase “There’s always gin at Camp Kipwe”. I want the T-shirt. After supper we have a few beers around the campfire with John and Yvonne, the Netherlanders who helped dig us out of the sand in Sossusvlei, who turned up at the camp this evening. Then it’s early to bed to the sound of African owls and crickets.

We’re up at 5am the next morning to explore some of this Southern Damaraland region. Our first stop is Burnt Mountain, a solidified lava flow whose red, brown, cream and purple colours are a striking contrast, at dusk and dawn, with the surrounding 200-million-year-old beige rocks. But it’s 6.30am when we get there; too late for the light show.

Nearby (a relative term in Namibia) are the Twyfelfontein rock engravings, the most significant rock-engraving site in Namibia comprising more than 2,500 engravings as well as several rock paintings. The indentations were created over the course of thousands of years; the oldest engravings possibly as old as 10,000 years were made by the indigenous San, or Bushmen people of Southern Africa. Dion is our friendly informative guide for almost two hours. But the rock engravings are recent history in comparison to the Petrified Forest , a field of fossilized tree trunks, two of which are monsters, each 45 metres long. These trees were swept downstream in a flood from the tropics and buried about 240 to 300 million years ago. Deprived of air, the organic matter couldn’t decay, but instead, over millions of years, underwent silicification, whereby each cell is individually fossilised and the appearance, even the colour, of wood is retained.

Here too is one of the world’s botanical curiosities, the Welwitschia plant. Although it doesn’t resemble a tree it’s classified as one – only 2 leathery leaves of up to 8m long & 1,5m wide are produced on the gnarled stem, but the leaves are shredded by searing winds & extreme temperatures into an ugly tangled mass.. Some specimens are up to 2,000 years old. 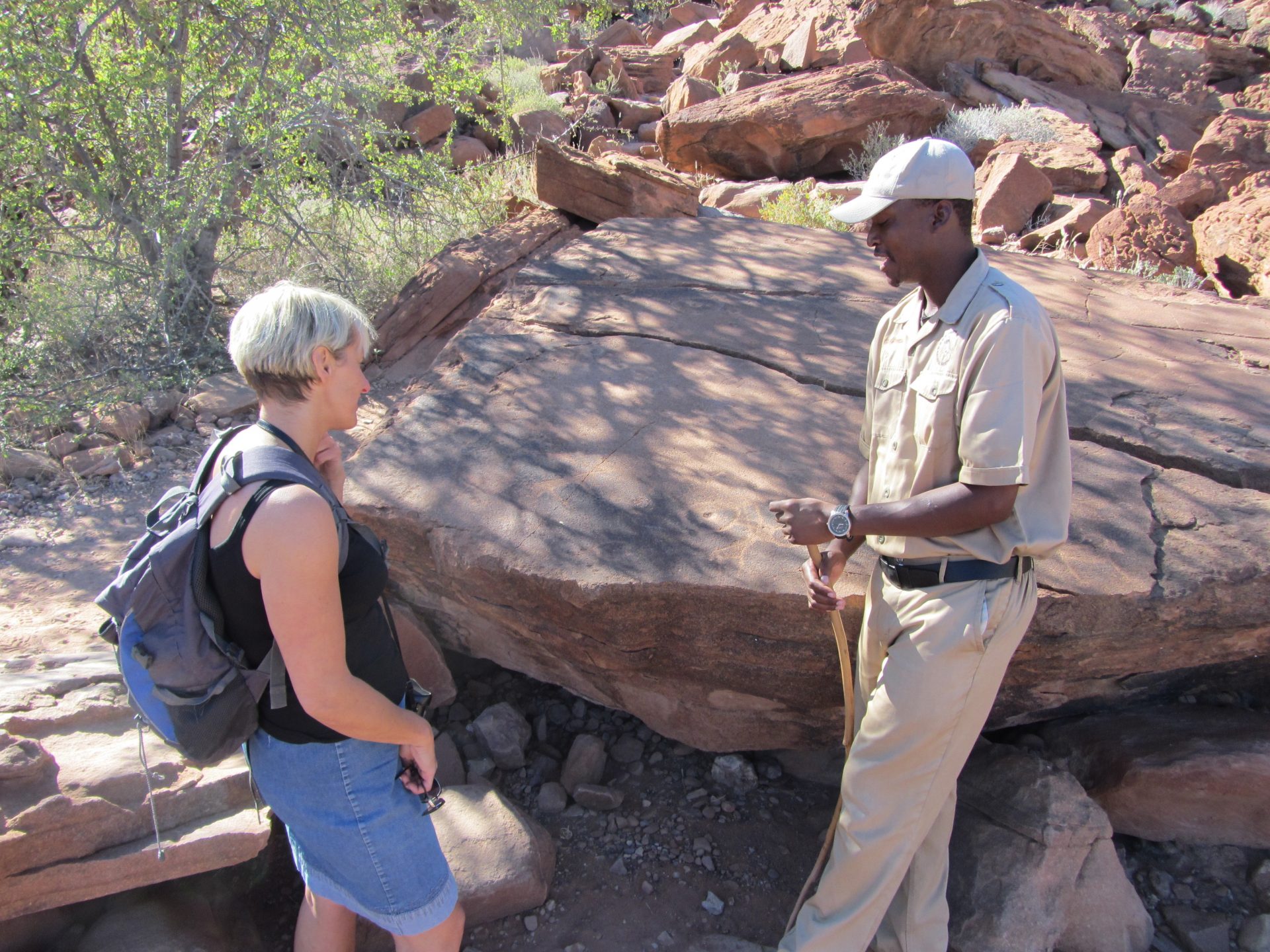 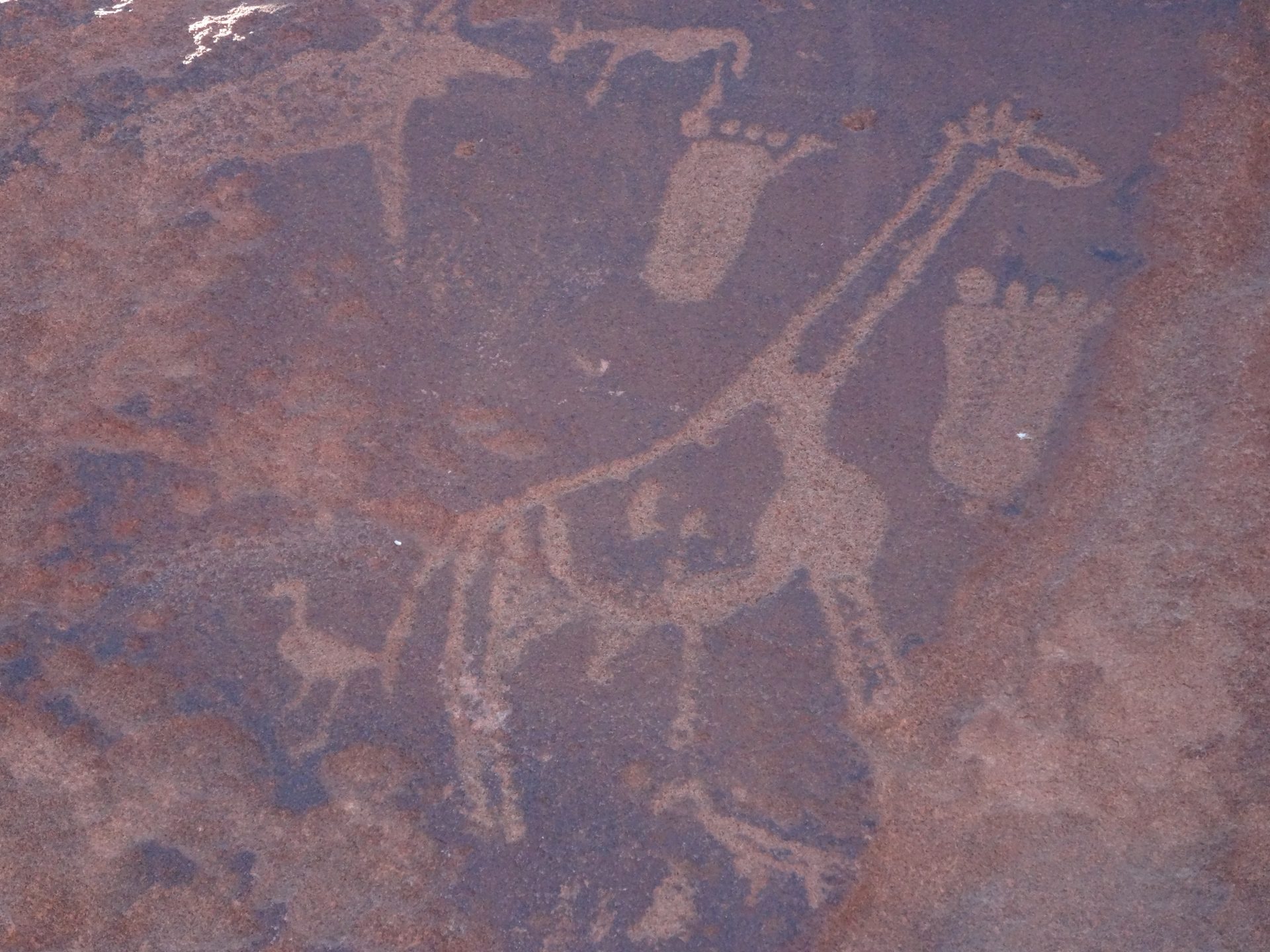 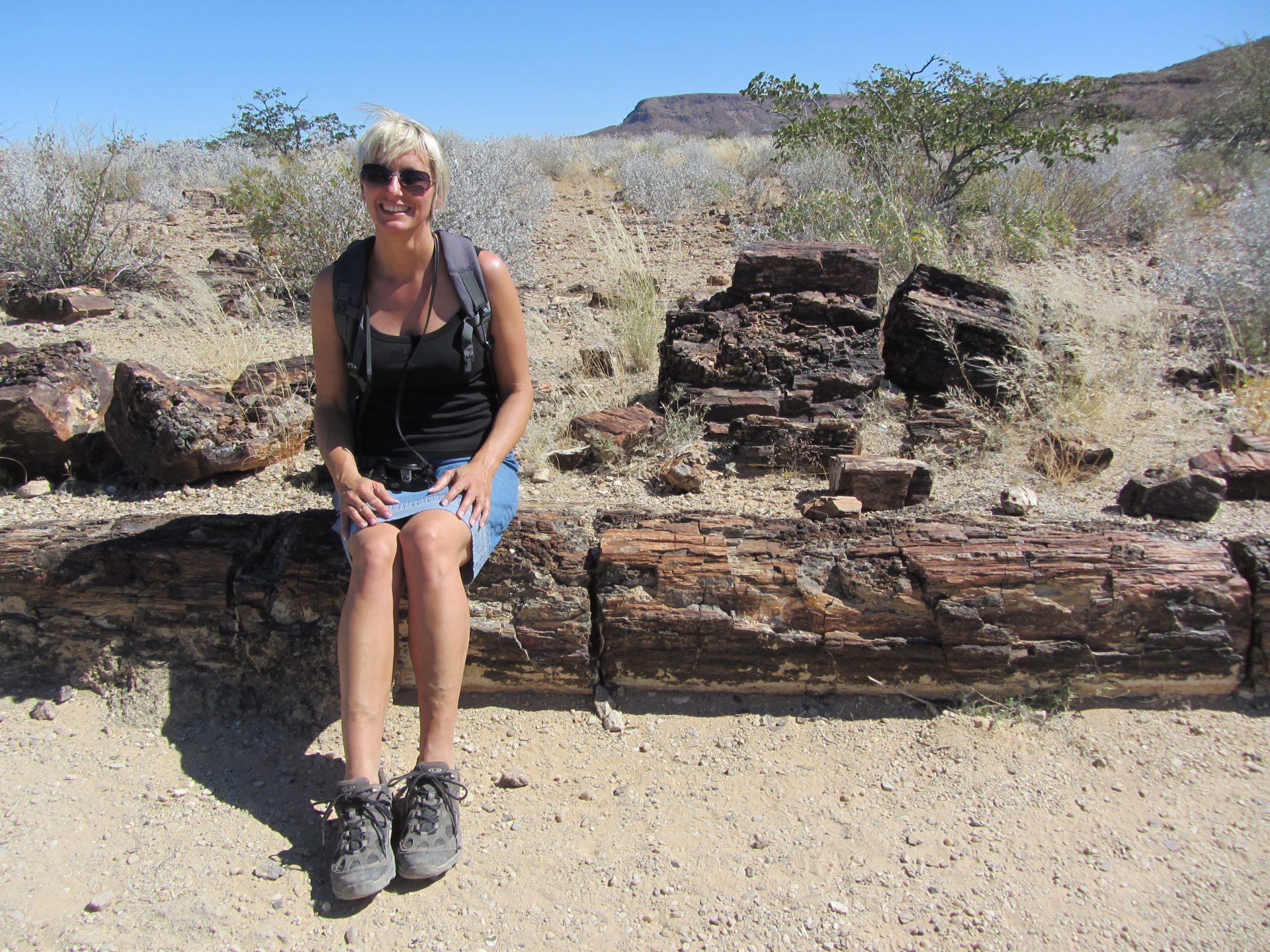 Back at camp, after a shower, we walk up the field to the bar tent for a Boboti. A South Africa dish, Boboti is a delicious mixture of curried meat and fruit with a creamy golden topping, not dissimilar to moussaka. Then we’re sitting at the bar where the gin has been replenished. The evening evolves into a bit of a session. We meet Jasper, a roving, white Namibian, Harrison Ford like character, who mines precious, semi precious stones and crystals such as fluorite and amethyst in the wilderness of northern Namibia and the Kunene river border region with Angola, remote and wild country. He’s just passing through, and Aabadi is a favourite watering hole. He’s a friendly guy and, to demonstrate the kind of thing he digs up, he places a big crystal embedded rock on the bar. It’s a bizarre coincidence but I’ve just finished reading a book by the prolific, underrated and now largely forgotten 1960’s South African travel writer, Lawrence G. Green titled So Few Are Free. It’s a great tale of travels up the west coast of Southern Africa between Cape Town and the Kunene river, by road, sea and air, with anecdotes about the places and people in between. Many of the stories have to do with the discovery of diamonds on the Namibian coast, of diamond thieves and smugglers, and those who died in the desert looking for the precious stones. I give my copy to Jasper who is amazed and a little overwhelmed by this gift. He says he’d like to return the favour with one of his crystal rocks but he can’t and it’s not something I expect. He does however buy a rapid succession of rounds. We go to bed much later than planned – not great as we have a very early start tomorrow morning. 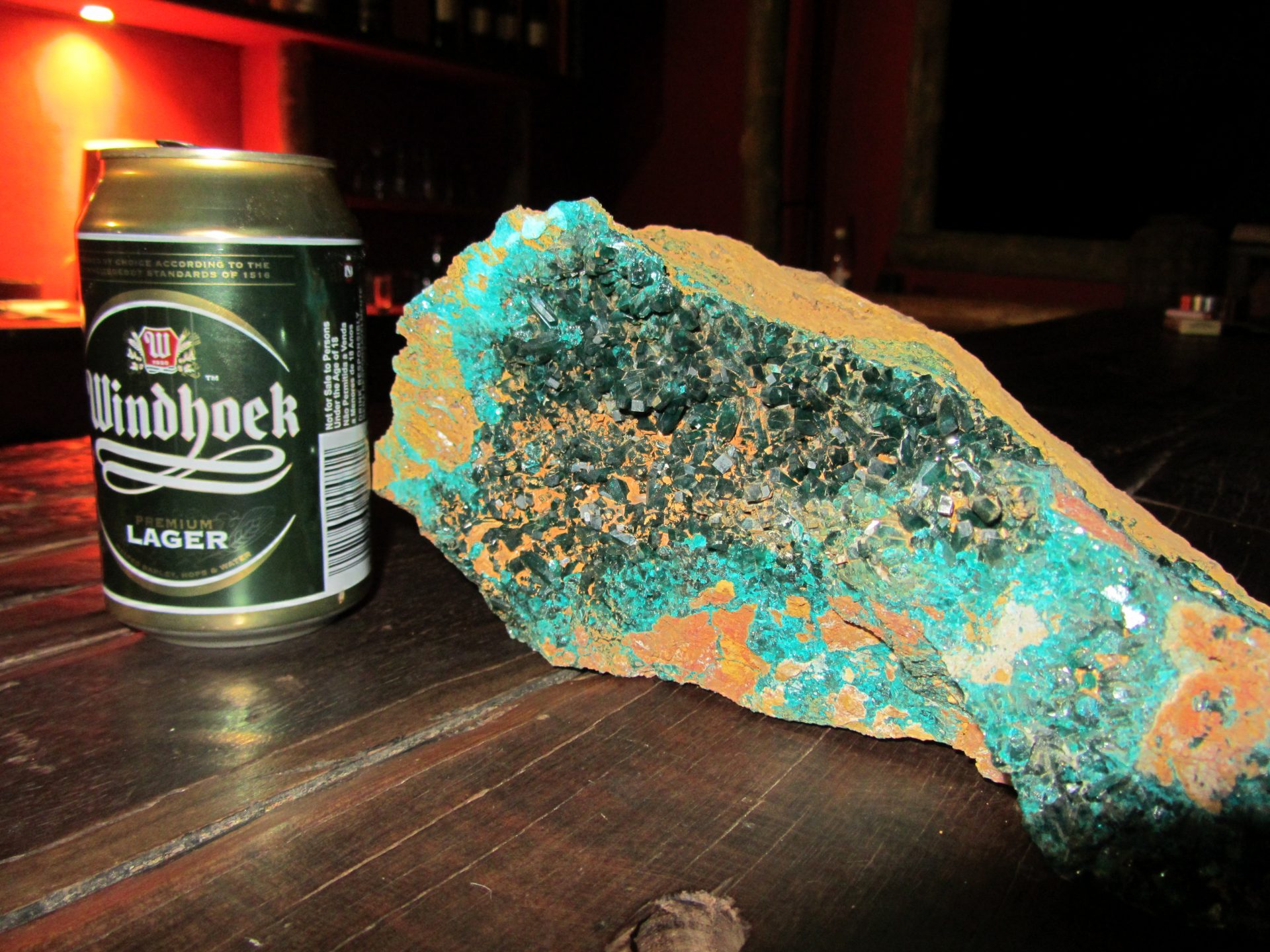 Thursday 5am, feeling a bit groggy, we drink lots of tea. Then it’s a short drive to Camp Kipwe where we’re introduced to Taffy, our young safari guide for the day. We have a nine person open top safari jeep all to ourselves. Taffy hands out woollen blankets to keep us warm in the early morning chill, and sets out a breakfast of warm muffins and fresh coffee. Jo is feeling pampered and thoroughly enjoying herself. We will see many animals today but the quest is to find the Namibian desert dwelling elephant. The extent of the seasonal travels of these elephants is probably the greatest recorded for African elephants. They roam, mostly at night, over vast distances, with little water, and maintain their own exclusive social groups. They are characterised by their relatively small size and very broad feet. Taffy is equipped with a two way radio and is in communication with several other vehicles searching for elephants. His call sign is Taffy and we’ll hear it repeated “Taffy, Taffy, Taffy” all morning. 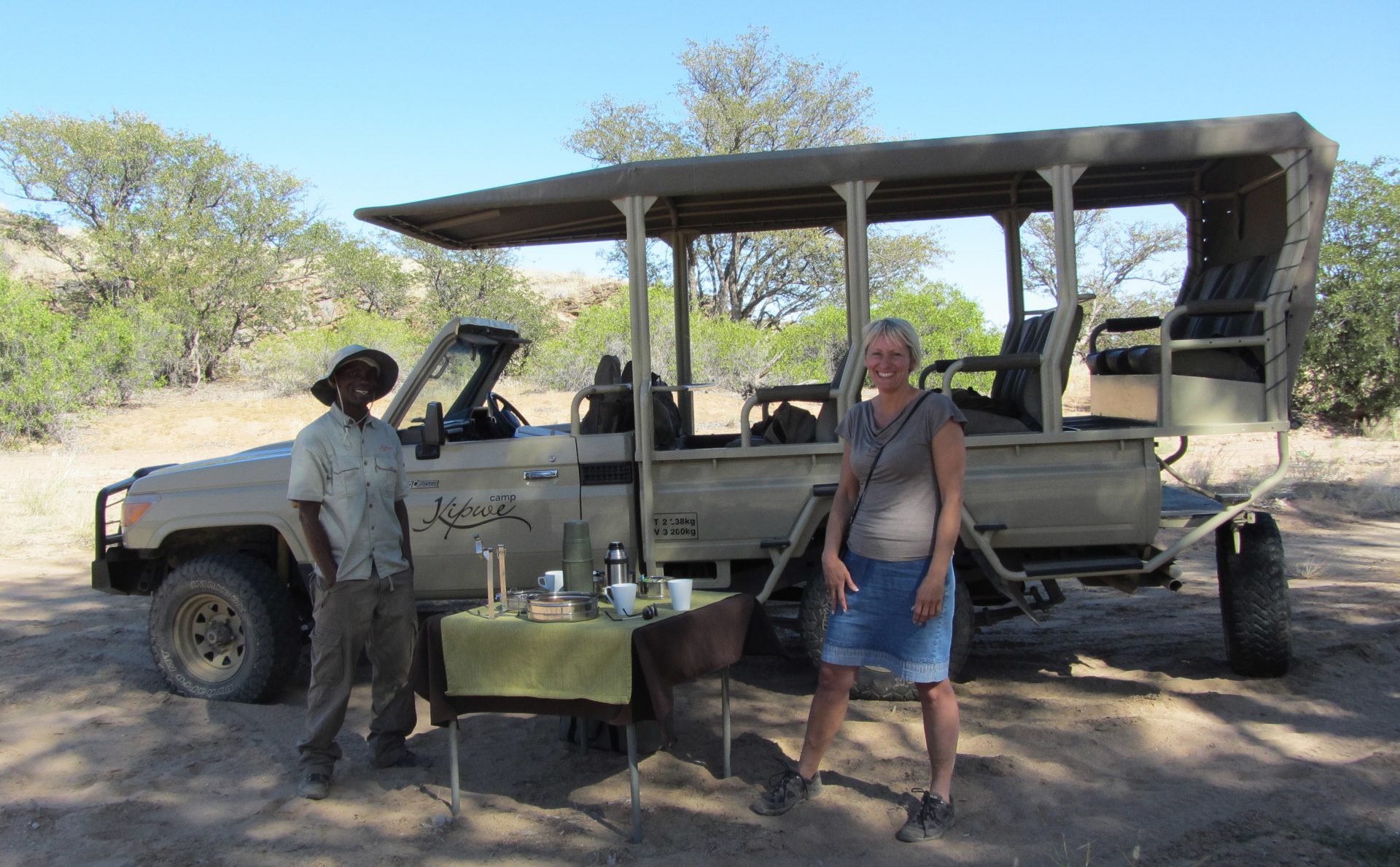 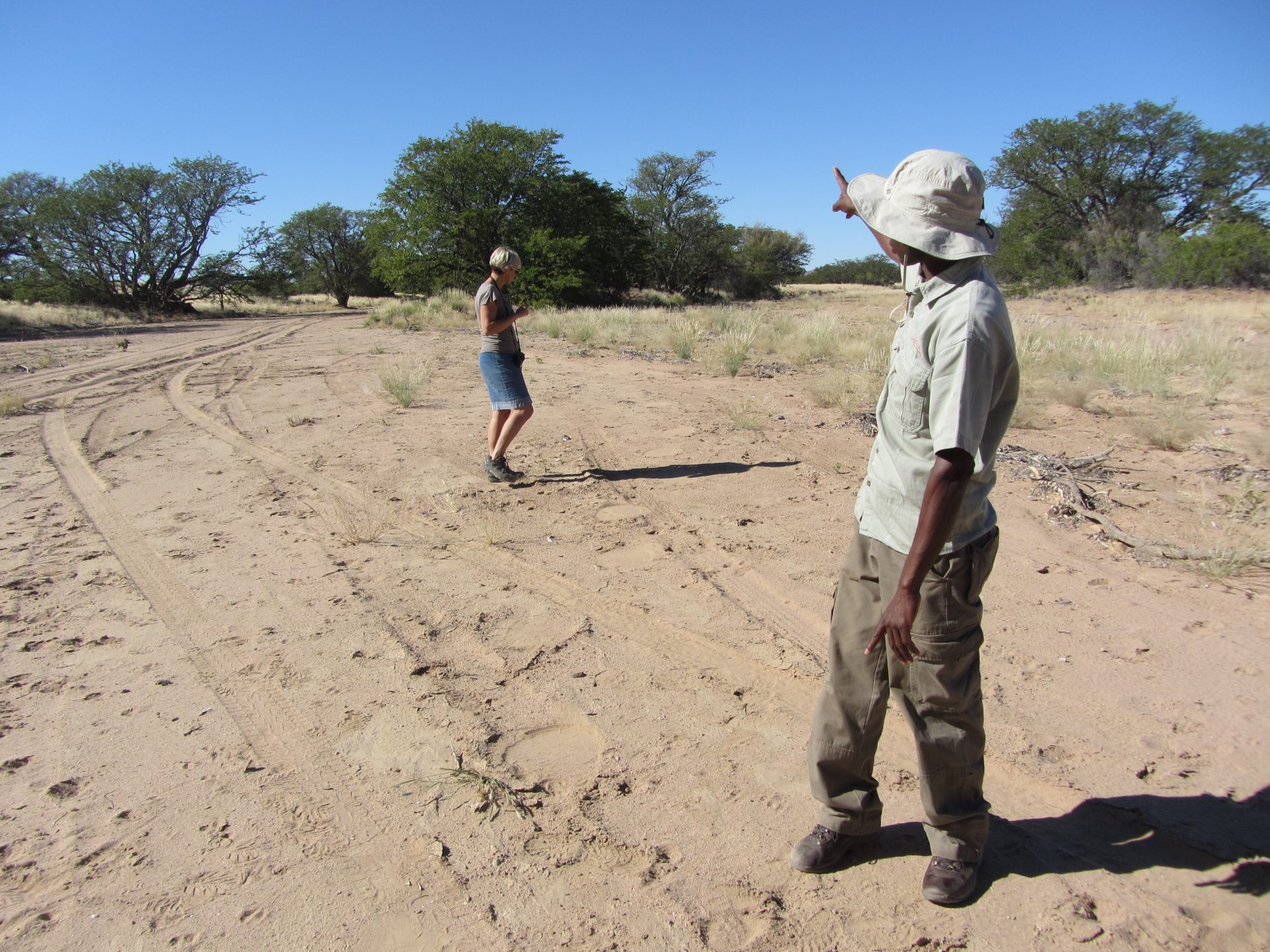 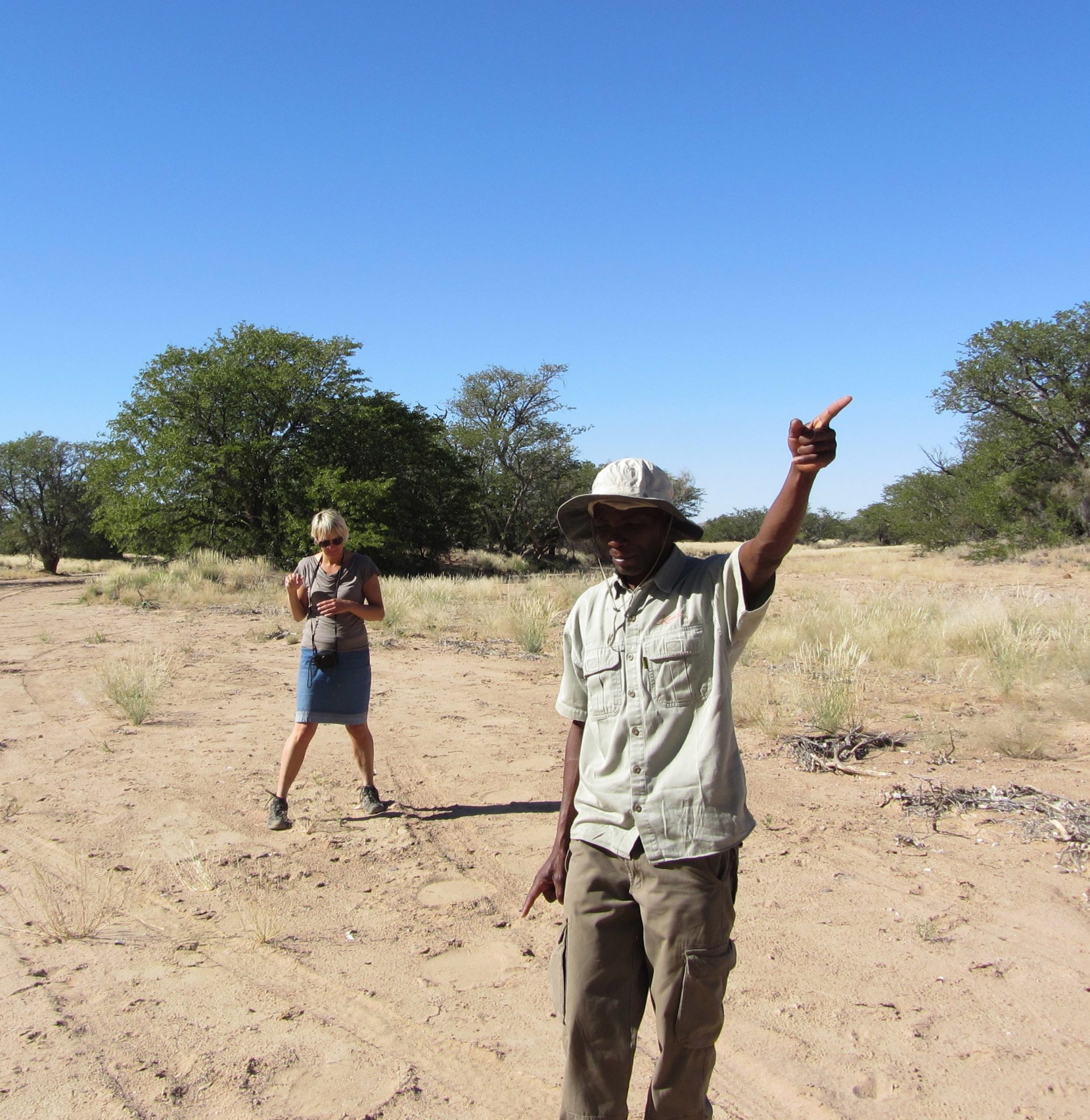 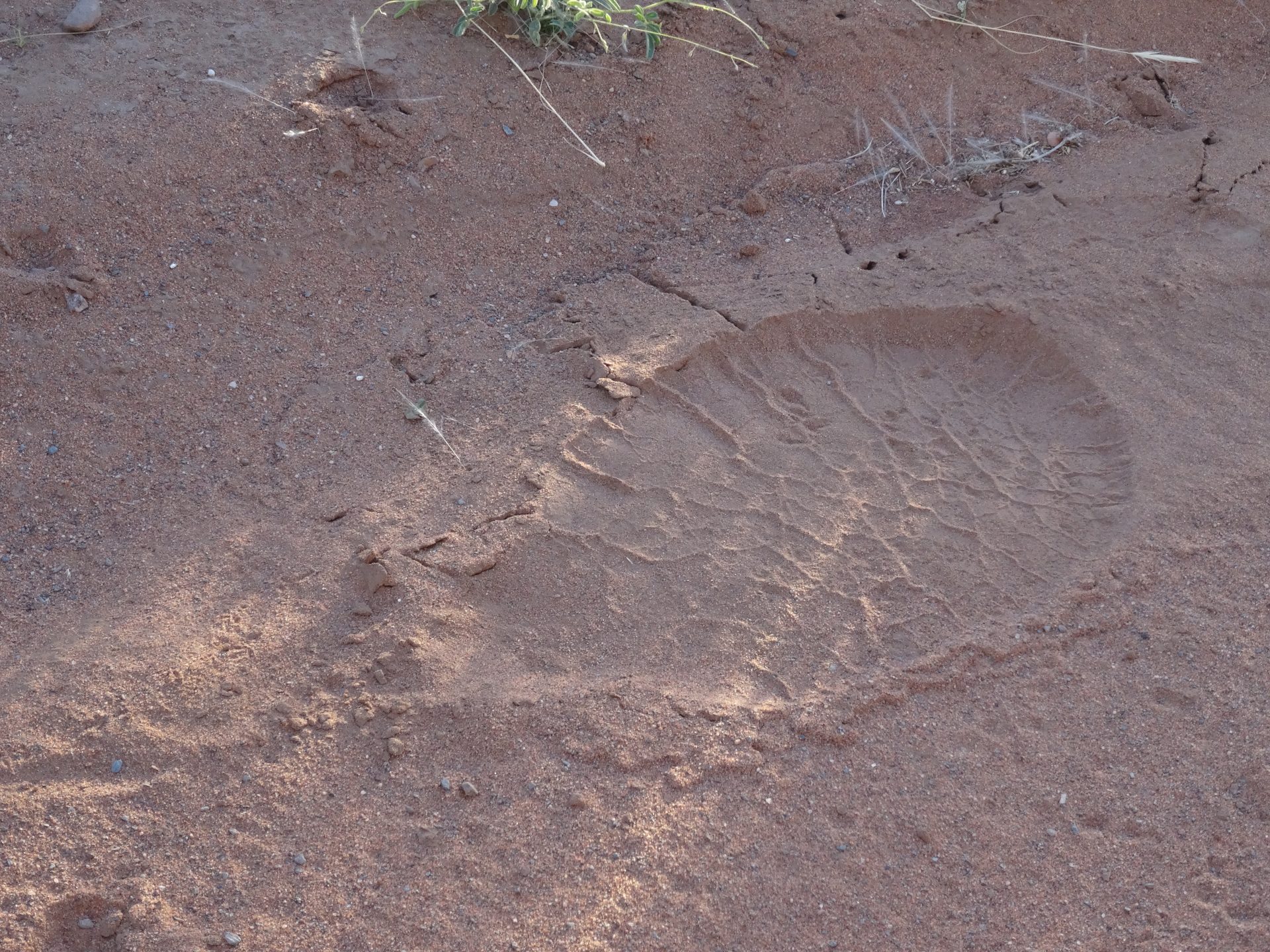 A small herd has been sighted 40km away, about 2-3 hours. It’s a slow drive on narrow rutted tracks, over desert sand and along and across dry river beds. After about an hour we spot elephant tracks and fresh droppings. Taffy radios his mates telling them of our find. He stops often now to check the ground – we can sense that we’re onto something. Then Jo points and shouts “look elephants”. It’s a small family group, an adult female, a female adolescent, a baby and two male adolescents. Taffy drives slowly in amongst them, where we remain for over an hour. They are quite comfortable in our presence, calmly feeding on luxuriant mopane trees. The pervading feeling is one of tranquillity amongst the elephants. It is very quiet, we whisper to each other. The baby is inquisitive and comes close enough to the vehicle for us to touch her, but of course we don’t

We see jackals, kudu, oryx, springbok and hart antelopes. And many birds; hornbills, weavers, eagles and rollers. We stop for a picnic lunch. It’s a wonderful day in the most perfect conditions. Jo is overwhelmed. Beaming, she says, “Yer average girl from Brighton doesn’t do this sort of thing”.

This afternoon we will drive to Northern Damaraland and another, this time unexpected, encounter with an elephant. 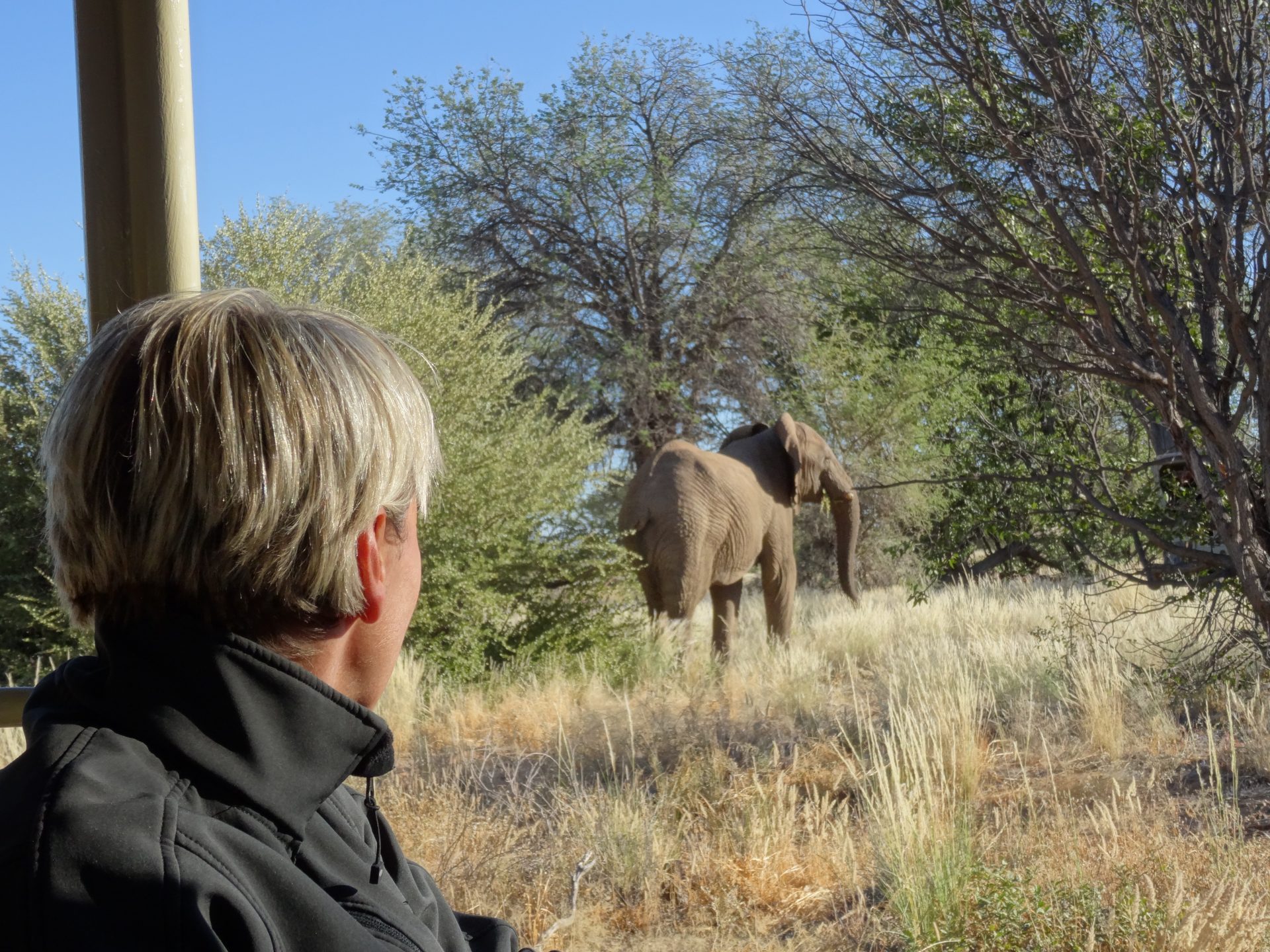 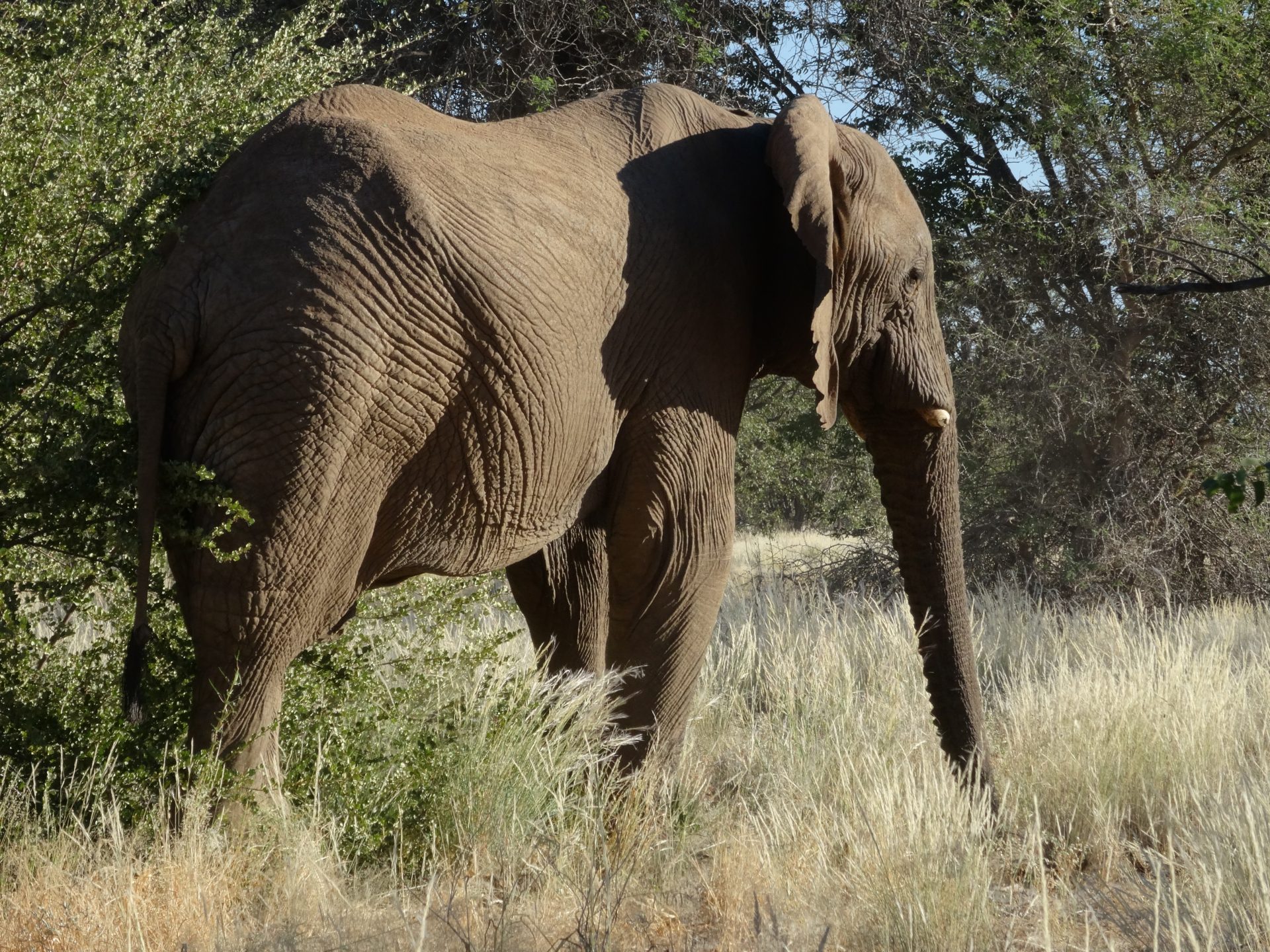 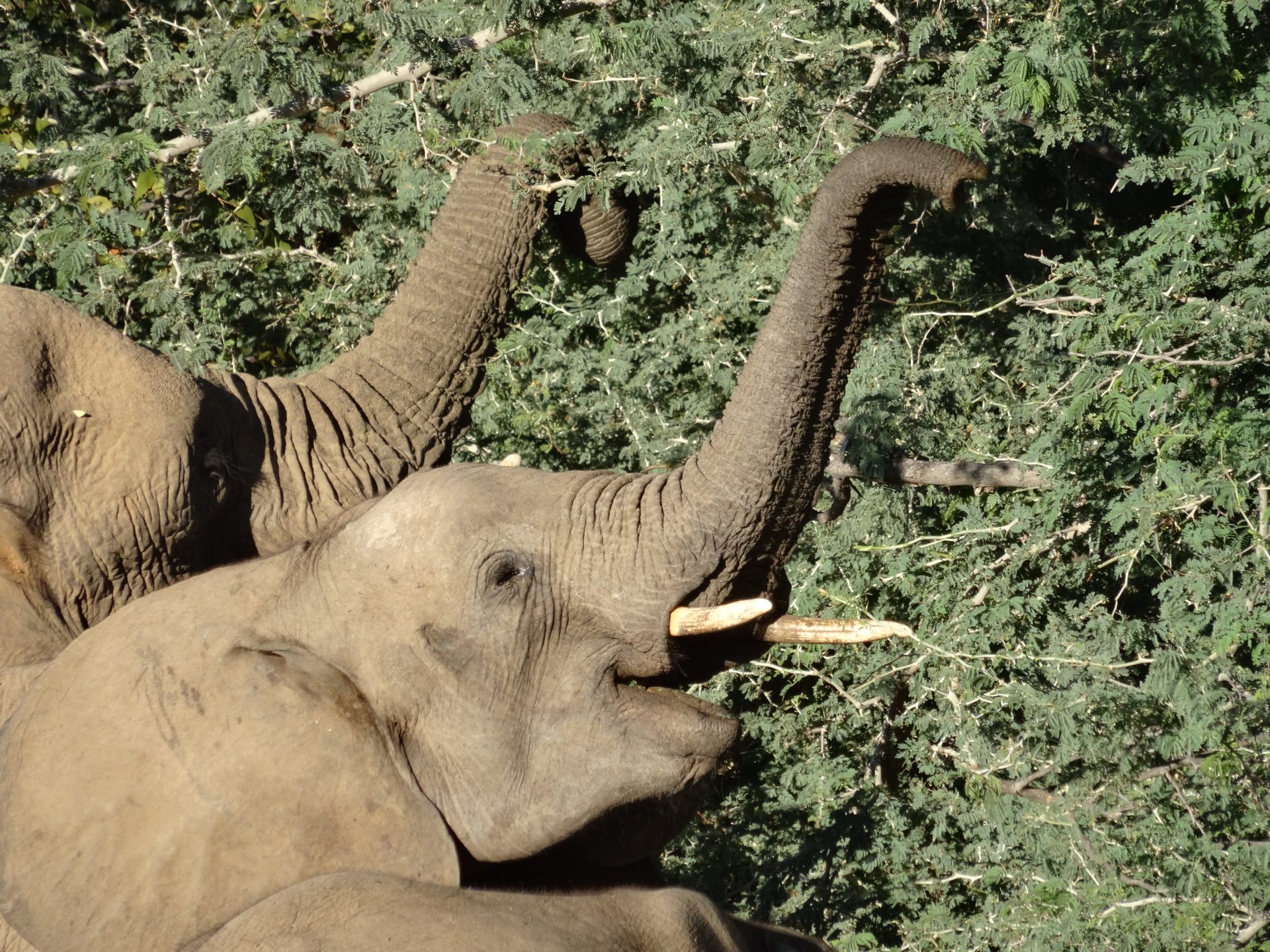 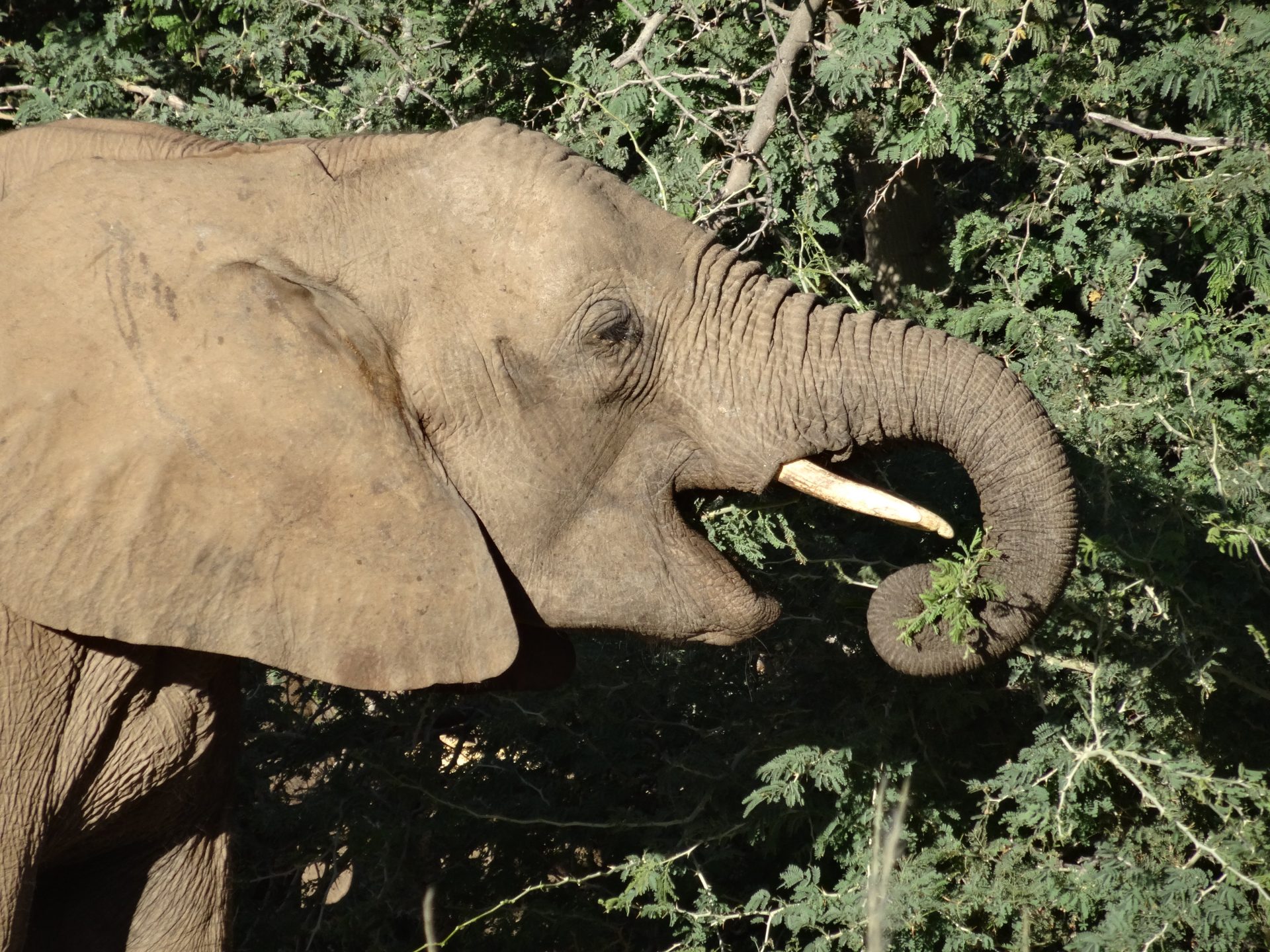 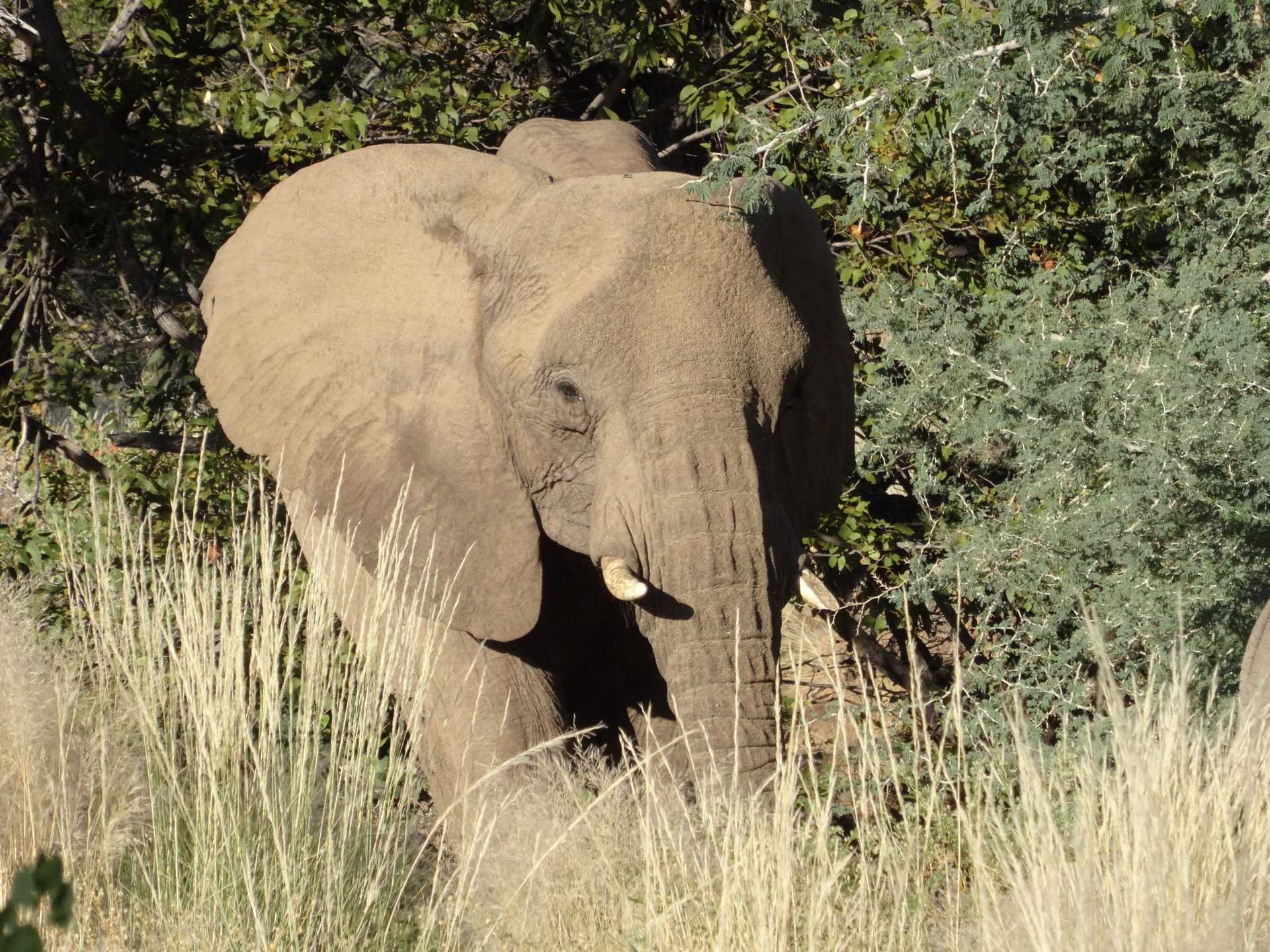 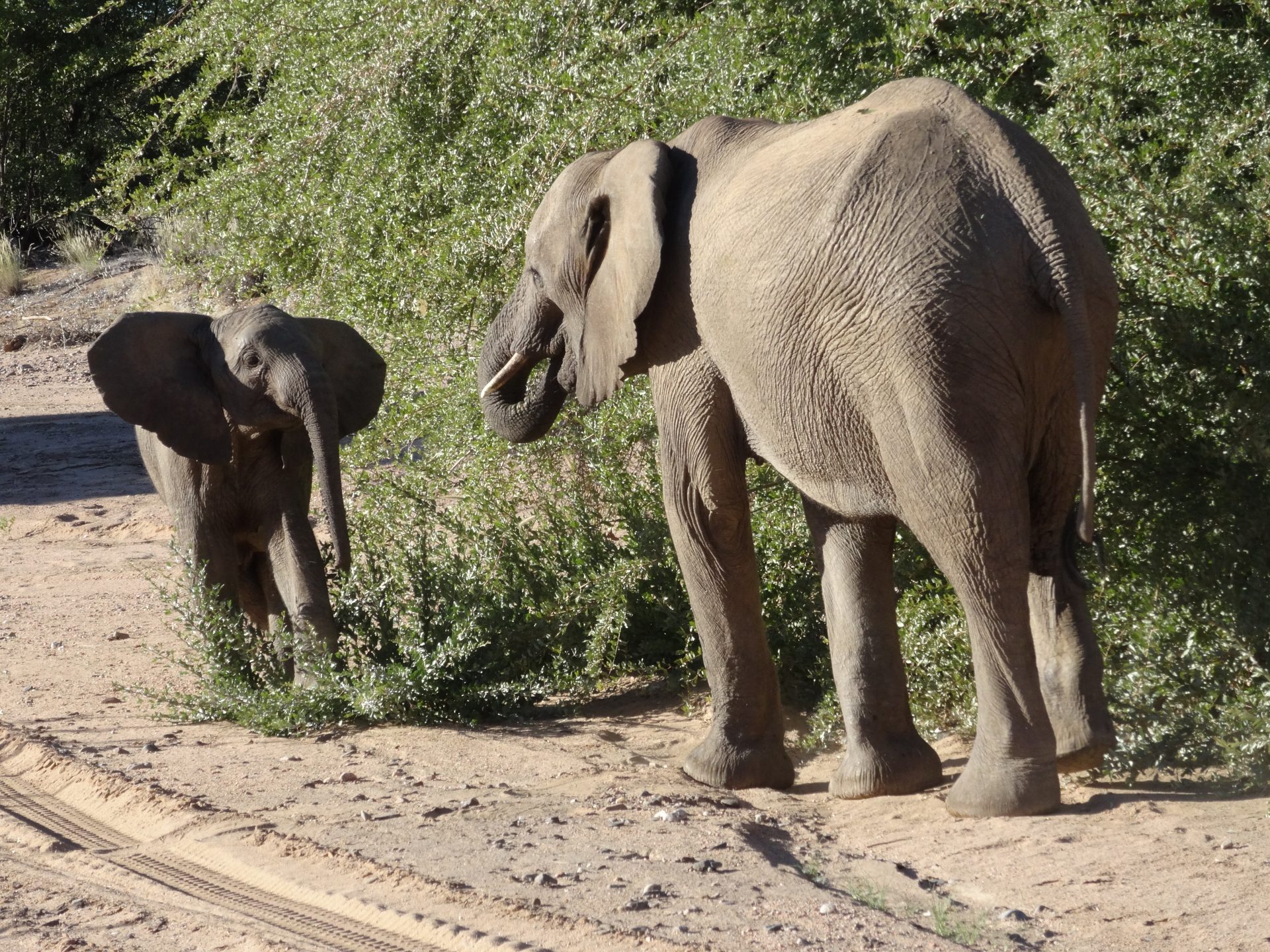 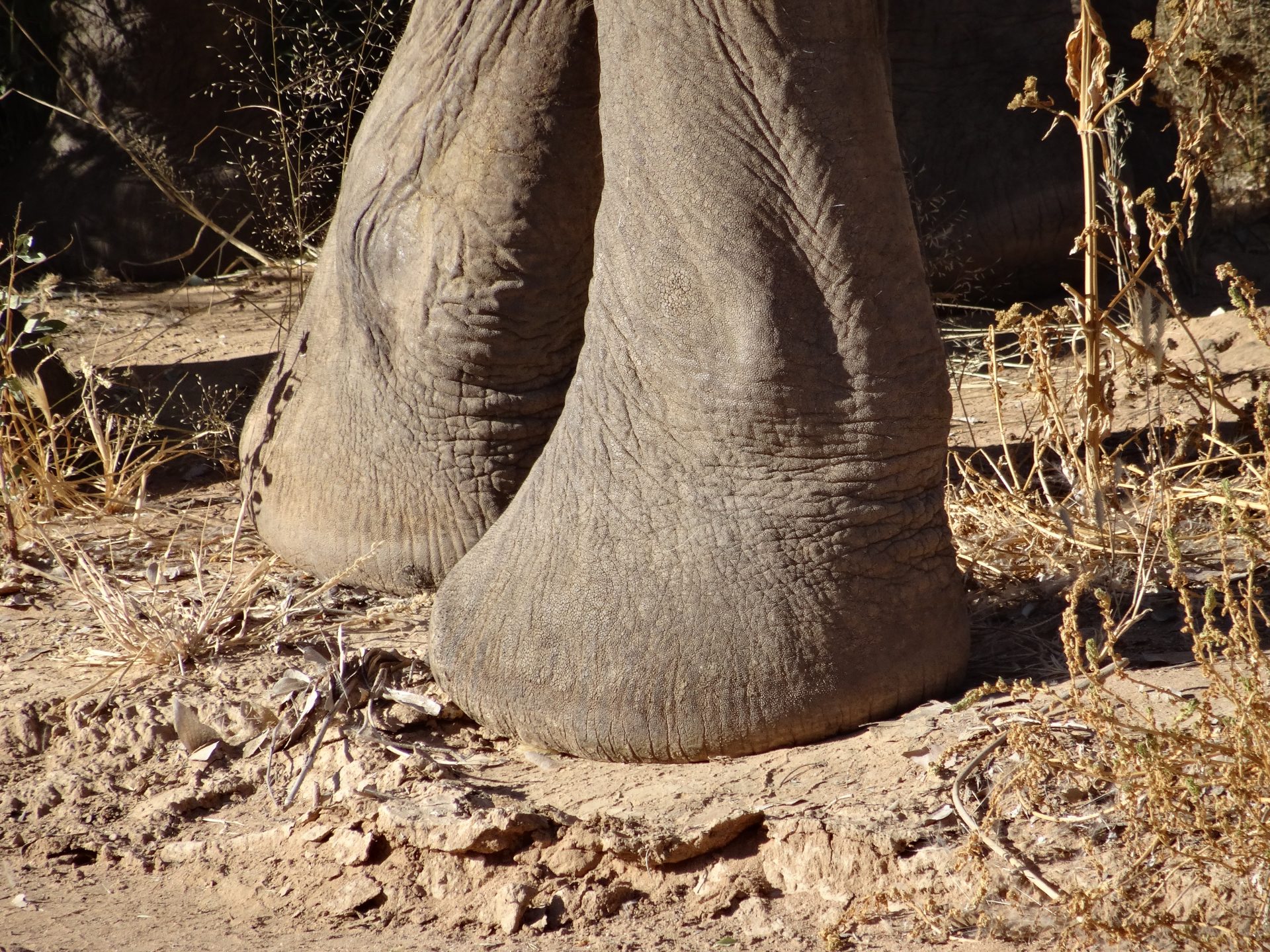