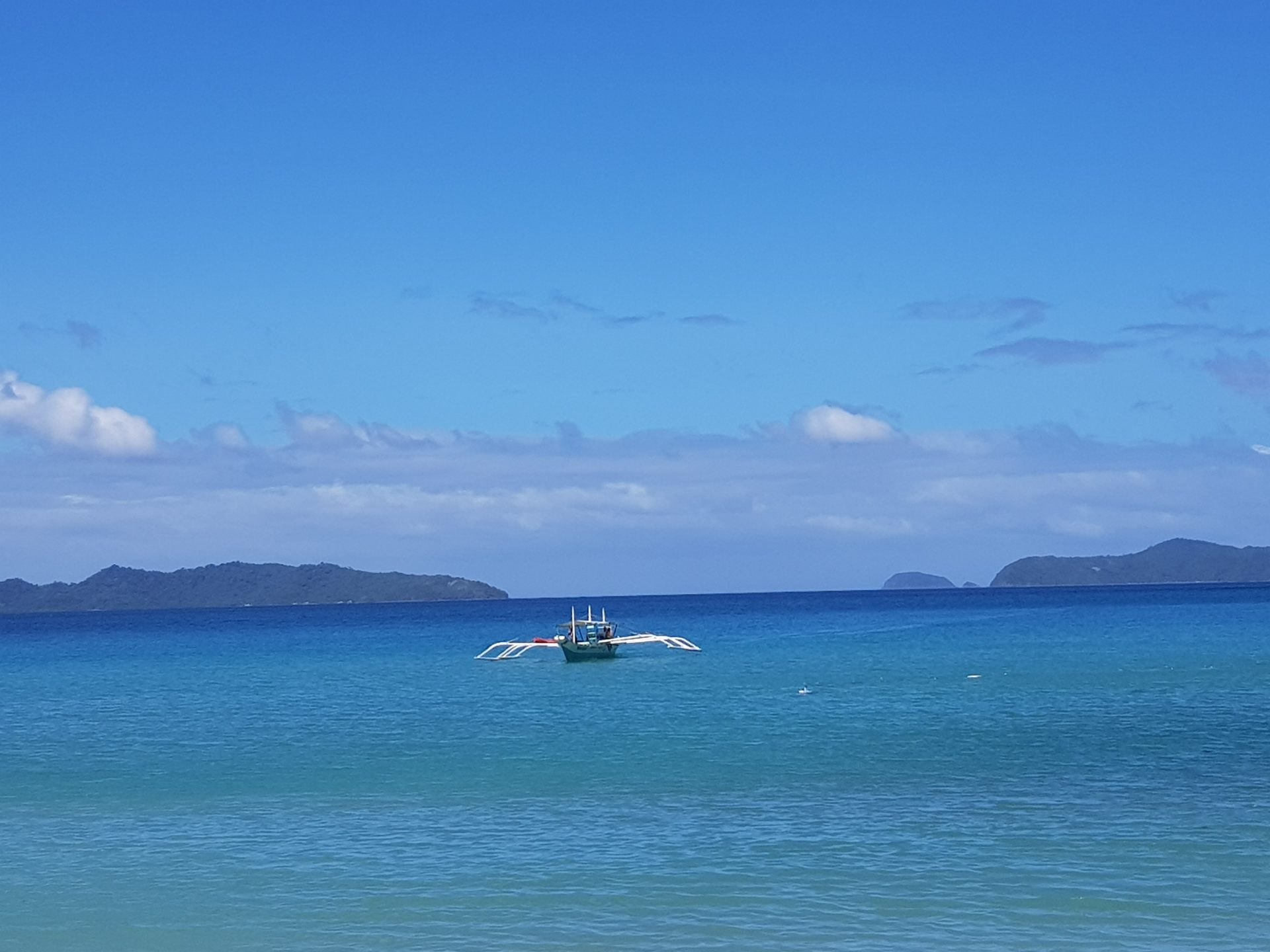 Mit Santa Claus in Port Barton on the Island of Palawan

The destruction of Malapascua is behind us and after a 1 hour 10 minute flight from Cebu we are in Puerto Princesa on the most westerly of the Philippine Islands; Palawan.

Palawan is about 300 miles long and 15 miles wide. We are worn out after our Christmas debacle and we check into a comfortable hotel with a pool. We will stay here for two nights before heading to Port Barton. There is little to interest us in Puerto Princesa. We will stay in the hotel, rest and publish our latest blogs. Our hotelier is a South African with a bit of a penchant for technology. The wifi works everywhere, he keeps an eye on things with multiple CCTV cameras and in the evening he projects big screen classic rock and roll videos from the pool area onto the wall of the hotel. I sit by the pool and enjoy these videos for a good three hours – I see for the first time a fabulous one of Lindsay Buckingham playing Big Love with great passion and energy on an acoustic guitar, live in Fort Worth Texas 2008 – quite astounding. I realise that I’ve not listened to any music for almost two months. Filipino karaoke is not music to my ears. 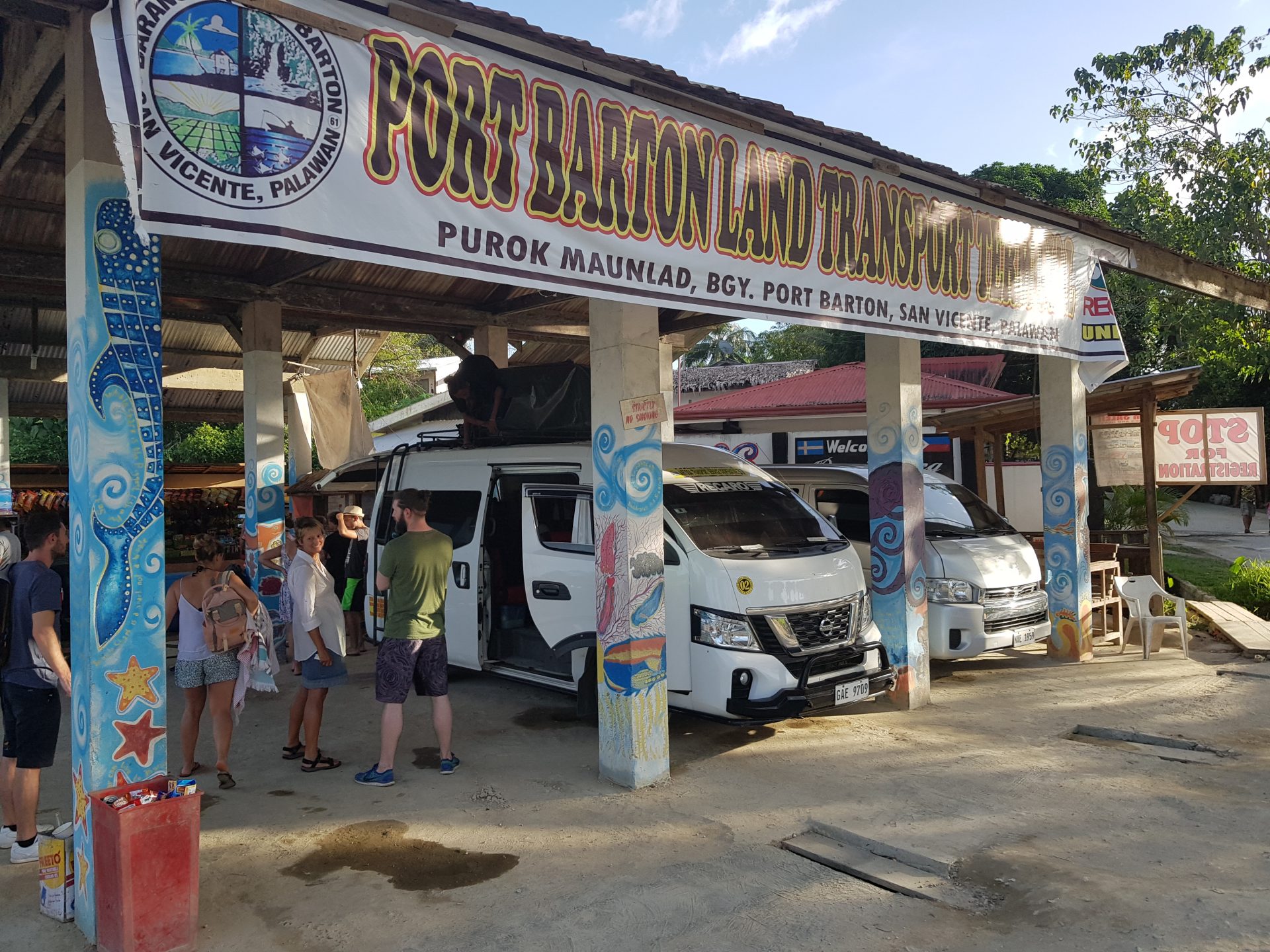 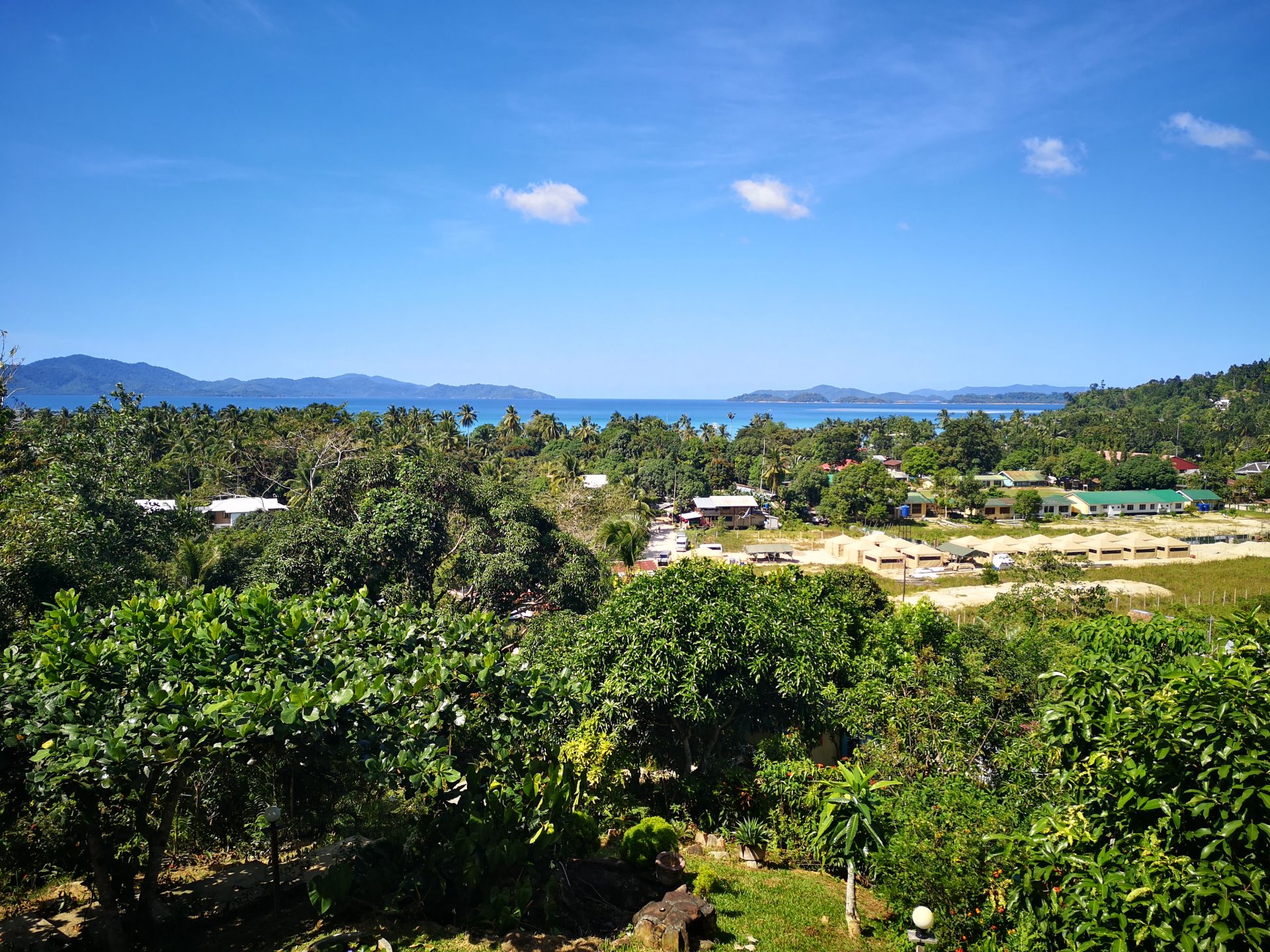 It’s a three hour minibus ride to the west coast town of Port Barton. It’s more of a village than a town. The thoroughfares are a crisscross of sandy tracks and It’s refreshingly underdeveloped. An English colonel called Burton was mapping the islands before the second world war and the village is named Barton after him. He must have been an army boy, not navy, as it’s not a port but a delightful beach fronted village on a horseshoe bay enclosed by lush forested hills.

Despite Jo’s ongoing campaign to avoid Christmas, she has booked us into a place called Santa Claus Hilltop. It’s on a hill behind Port Barton and we have a very comfortable detached private apartment with fine views of the bay. The only downside is the ever pervasive noise. It’s New Year’s Eve and when the discos and karaoke joints stop, the dogs and cockerels kick off, to be followed by 5.30am mass which like all Filipino events is a high decibel performance to be enjoyed (??) by everybody, like it or not.

Why Santa Claus hut? Because Santa lives here silly! Santa is a grey bearded, rotund 75 year old Dieter from Göttingen, Germany. Married to a 30 year old Filipino Collette. She runs the place under Santa’s very occasional watchful eye. He’s a much travelled cheerful and humorous raconteur. He generously invites us to join him, Collette and a fellow German to welcome in 2020 with a fine bottle of champagne. We watch Port Barton’s homemade firework display on the beach from their balcony. I love his Anglo German English. There is a lovey beach called white beach “you can go wiz ze feet one hour half or wiz ze boat fifteen minutes”. On the joy of youth and travel, ” ya ze first time is immer ze best”. On Brexit: “When Italy go and have too much credit, zey must be going and ze EU is finished. And you going first.” he laughs heartily at our cleverness. And on the gross Fillipino practice of eating a fertilised duck egg where the embryonic chick is partially formed. Santa hooks his finger like a beak and says,” ya, when you make open they look you. You eat”. Of the world today he says “now is crazy, crazy und kaput” a lot.

A travelled man or woman is conscious of our changing world. In Asia he has seen remarkable, sometimes shocking transformations in just a few years. Crazy crazy! 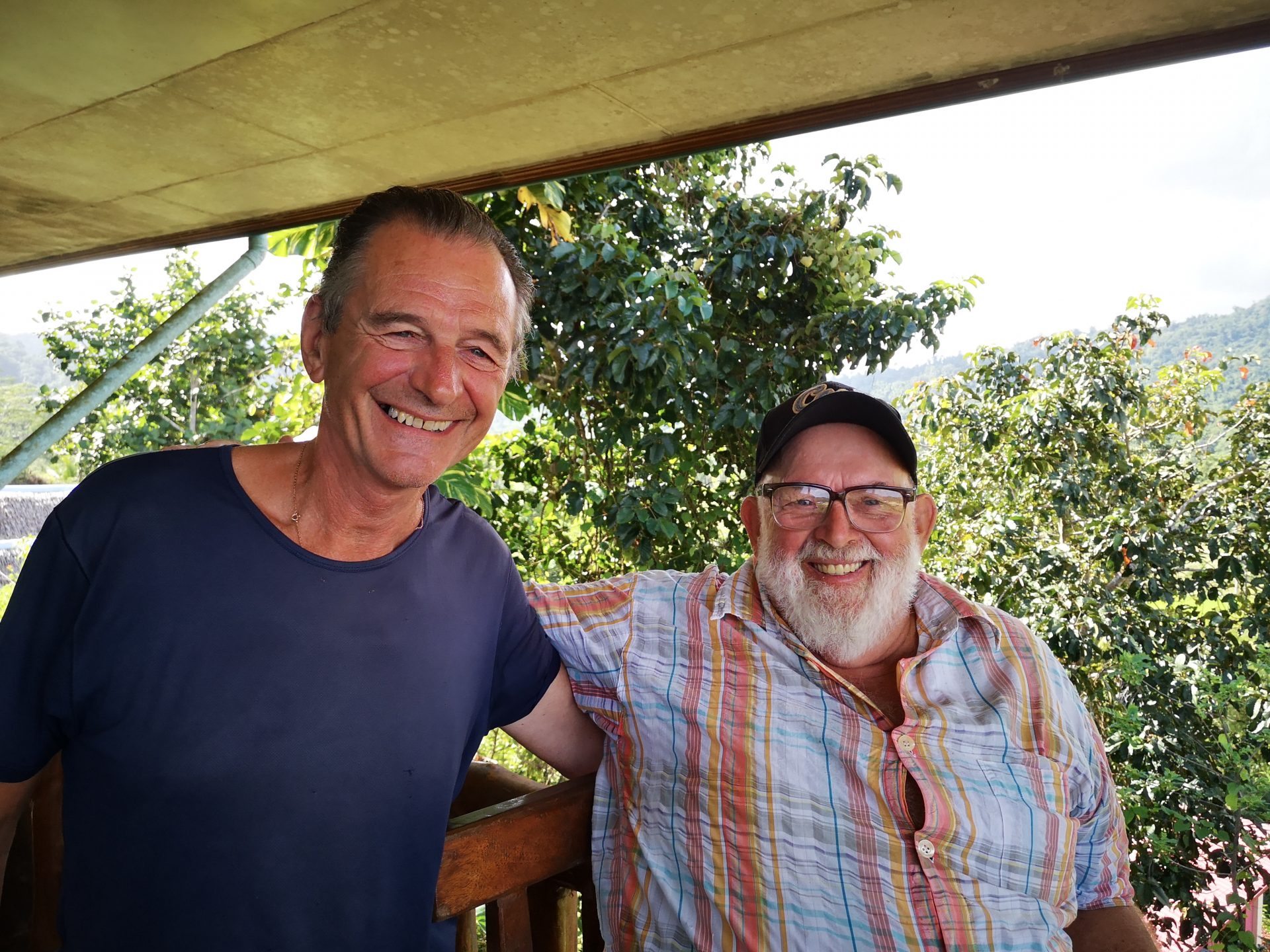 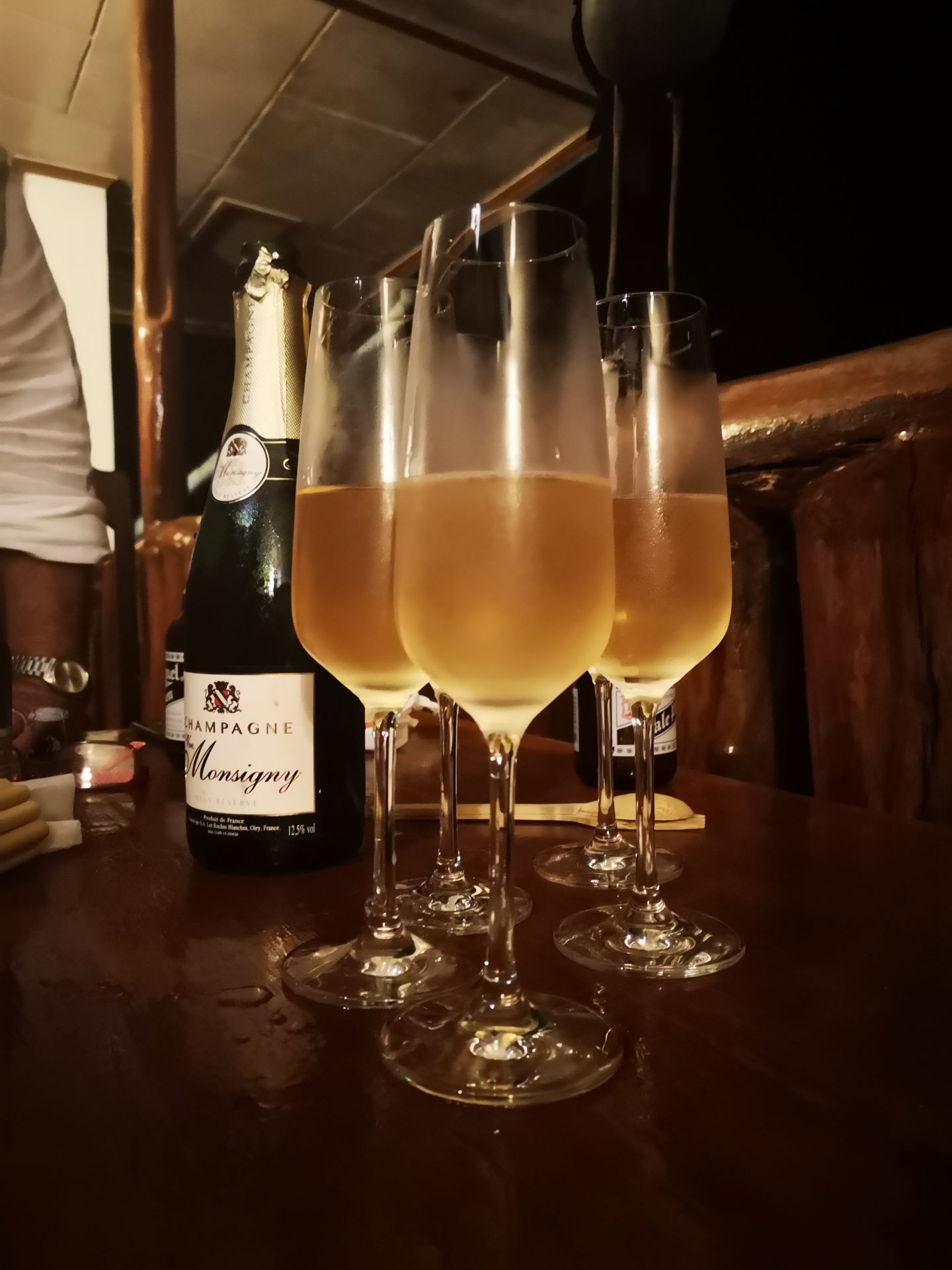 I Believe in Santa Claus

Santa tells us that Genson Is a good man to take us on an island daytrip – he books it for us. The local boatmen used to fish the rich waters off Port Barton but now they conduct lucrative island hopping tours instead and the fish come frozen from Roxas, an hour away. We’re on the beach at 8am. Nine of us, Europeans: Irish, Italian, French, German, British. A good group – some interesting young characters. Genson is tiny but powerfully built. The islands are idyllic. It’s a little overcast in the morning but develops into a beautiful day. The waters are gin clear and the reefs are plentiful and bountiful. The coral is some of the best I’ve seen; thin folds, tubes, veined bulbs, purple, orange green and white. We see big red spotted starfish, a striped sea snake, a turtle, and many tropical fish. I’m approached, in rapid darts, by an aggressive parrot fish. Yes he bites says Genson, after our swim. He is famous for doing this here, he explains. Now he tells me! Lunch on one of the islands is a fresh fish barbeque and delicious. A splendid day. I like Port Barton. So does Jo.

The following morning we take a boat (not wiz ze feet) to White Beach; a palm fringed strand of sand that is brilliant white in the sunshine, with a backdrop of tree covered hills. We are at our ease here for five hours, swimming, reading, sun bathing, or just plain being. After two month’s travelling I feel the need to relax, and importantly, have acquired the ability to do so. We’ll get some more of this. But tomorrow we will visit the northern town of El Nido.

El Nido is an example in microcosm of the problem facing so much of South East Asia, if not the world. It’s a small port on the northwest coast of Palawan hemmed in by soaring rocks with a single access road leading to the small beach. Over the last few years it’s been the victim of unregulated property development so it’s an architectural mess. Off the coast are the many beautiful towering islands of the Bacuit peninsula. They are the reason people come here.

Our hotel in El Nido is a forgettable cell like room. Cell like is apposite as I’ve picked up a copy of The Animal Factory by Edward Bunker;  a gritty novel about life in San Quentin prison in the 1970s. I pick up, occasionally buy and sometimes swap books as I travel. I swapped a book for Orwell’s Burmese Days in Rangoon and I swapped another for a novel called The Ringway Virus by Russell Foreman – a 1976 novel about a virus that wipes out mankind on earth. Jo, despite her recent encounter with a virus, is now enjoying it. It’s a fun quest to find the next read.

There are four designated tours of the islands around El Nido. We arrive at 9am for Tour B, billed as a calmer southerly tour. If this one’s calm the others must be mental. There are at least a hundred Banca boats moored off the beach – twenty abreast and four or five deep. It’s a windy day and there’s a good sea swell. We are directed to load our bags into a kayak and walk into the ocean to our Banca 30 metres off shore. I look down the beach. There are many hundreds of tourists wading into the water. It’s like a vision of Dunkirk. Boarding the Banca is not easy in the choppy waters. I cut my torso, helping Jo to board, on the bouncing boarding ladder – not serious but annoying.

We motor out into choppy waters to the first island stop. There are about fifteen boats there disgorging passengers onto a tiny strip of sandy beach (most of the beach is private and out of bounds). The guileless tourists wander about the beach like prisoners in an exercise yard before being beckoned back to their respective vessels. The whole thing is ludicrous. It’s too rough to snorkel and there is nothing much to see underwater. We make four more stops throughout the day of which I have nothing much to report. 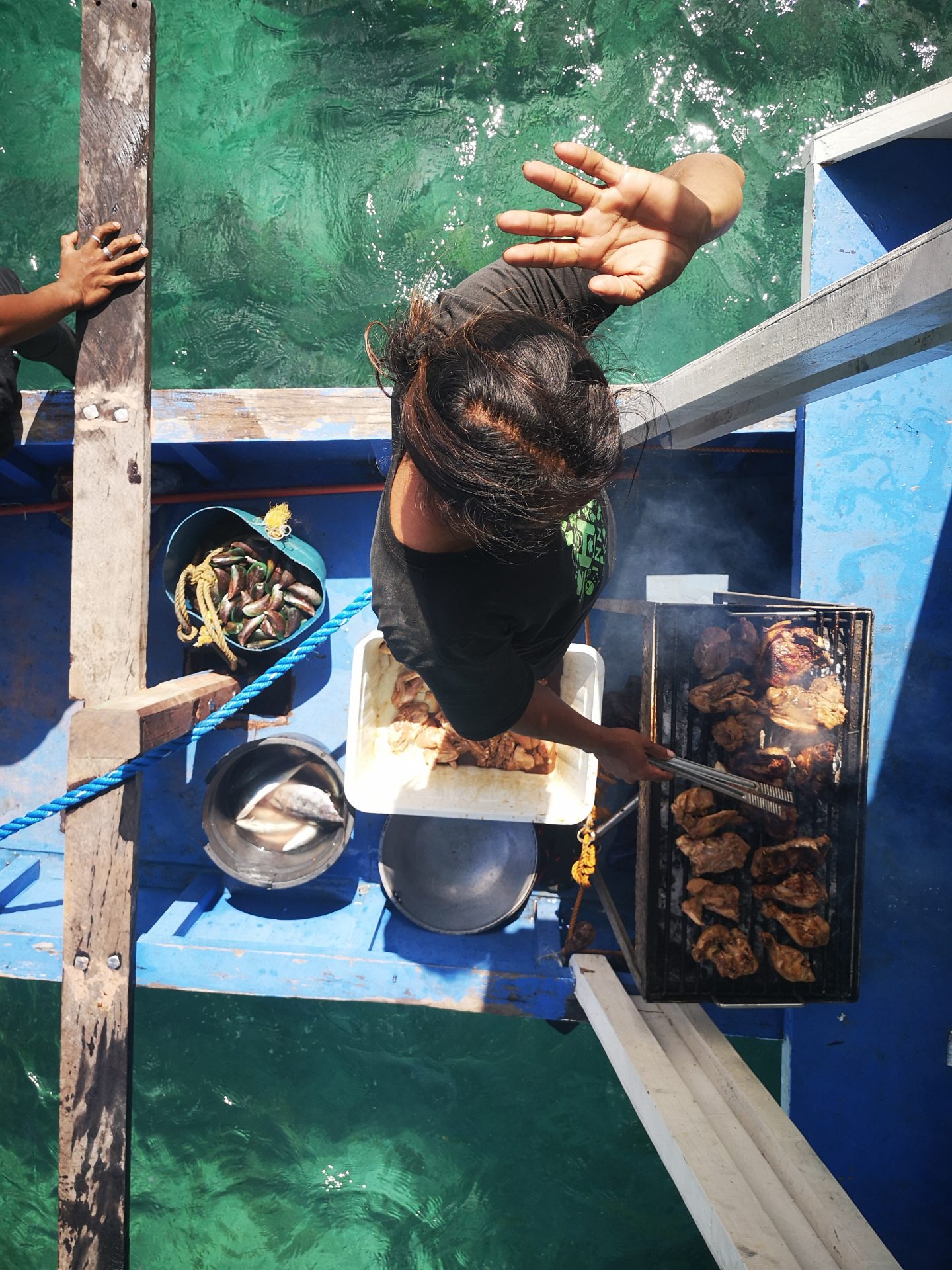 The day is saved when Jo climbs onto the solid roof canopy of the boat. We feel we have escaped and are alone at sea. The views of the islands from afar are wonderful. I buy a couple of very cold cans of San Miguel beer from a kayak foodseller, which cheers us up, and lunch at the third island stop is splendid; fresh tuna, mackerel, prawns, mussels, pork and chicken barbequed on the onboard grill.

To top off the day a cocky young tattooed crew member makes a move on Jo.  You alone? he asks when I leave her on the deck roof for ten minutes at the end of our voyage. Cheeky bugger knows she’s not as he’s seen us together all day. f?%*!? him. Jo is quietly flattered by his attentions. But he’s out of order. It’s tough enough having to keep an eye on my bags without having to keep an eye on Jo in case somebody steals her!

El Nido is simply overwhelmed with young travellers. It’s a circus – a wet Cheddar Gorge on a bank holiday. It’s overcrowded and depressing. But we had to to come and see it for ourselves. In the evening we wander down to the beach for a couple of beers and a light snack. Over chicken wraps we get into conversation with a German woman who teaches in Bali, Indonesia where she has lived for many years. She describes herself as bewildered by El Nido. She’s here to take a break from the overcrowded chaos of Bali and she’s mightily disappointed. 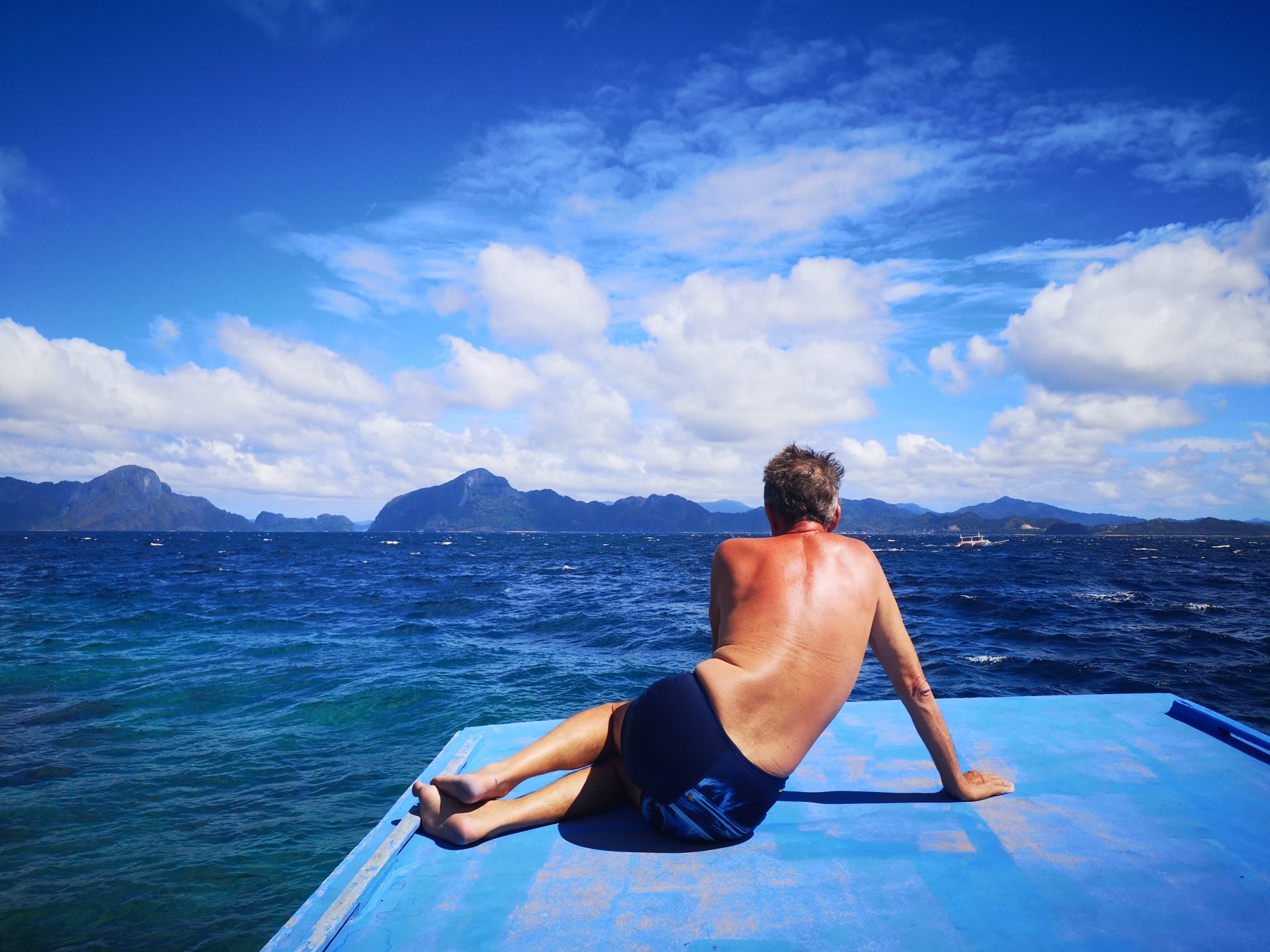 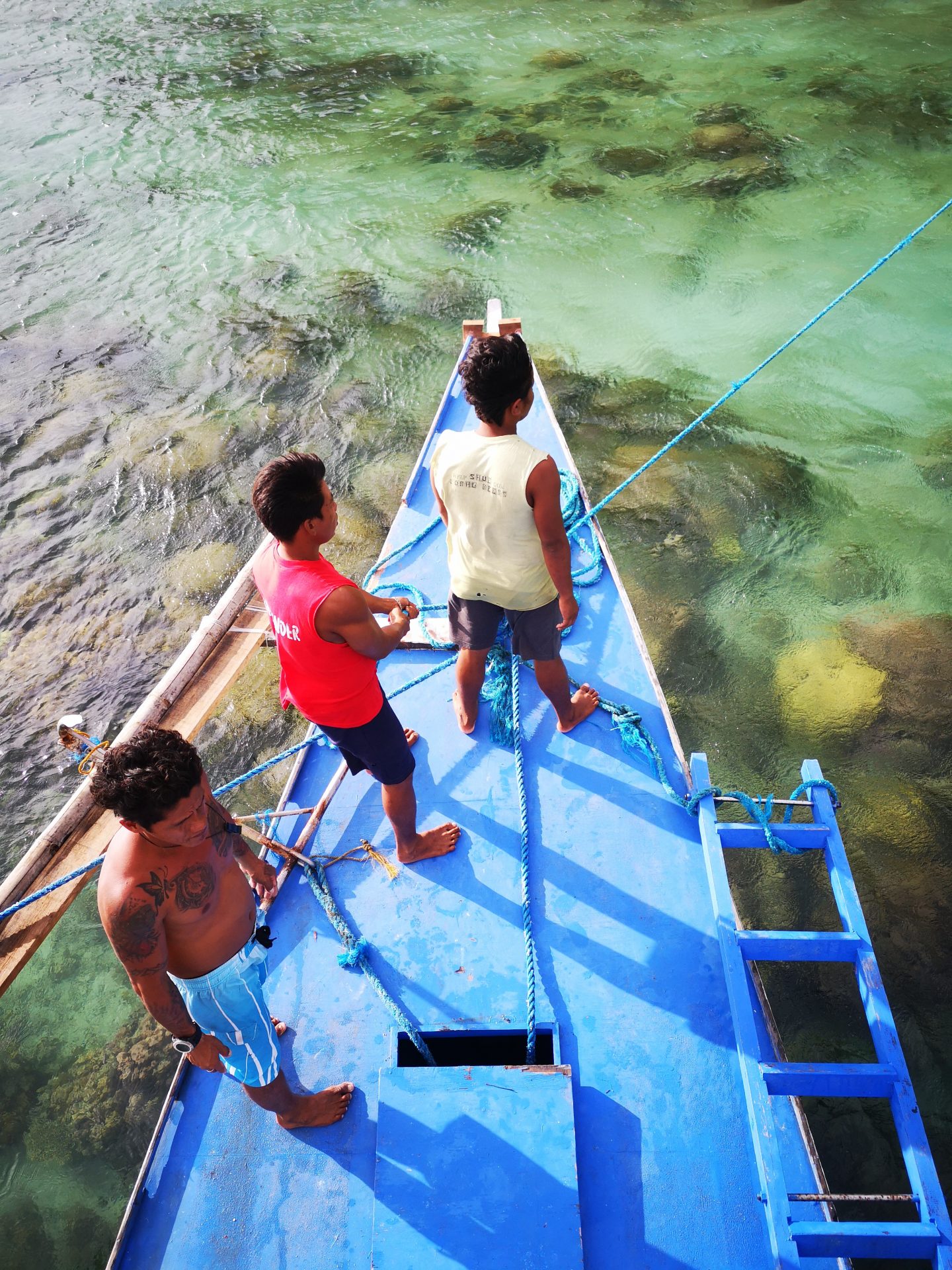 Then next morning we catch the early bus back to Port Barton and another night with Santa. It’s good to be back. It’s an overcast day so we catch up on laundry and other domestic chores. In the evening we dine at Mojitos restaurant – recommended to us by a friend who lived and dived here in Port Barton for ten years. We meet an owner of the business, Jackie. She’s delightful and introduces us to the healing properties of crushed papaya leaves – used to treat Dengue fever and disorders of the liver, stomach and colon.

Tomorrow we will return by bus to Puerto Princesa for a flight to Manilla and onward flights to Kuala Lumpur and Vientiane – the capital city of Laos. But first Jo will give me a tidy up haircut, nothing dramatic, just a little trim around the ears. She does a fine job. I offer to do her fringe but oh no, Jo has to do her own. I will sneak a photo of the result sometime soon. 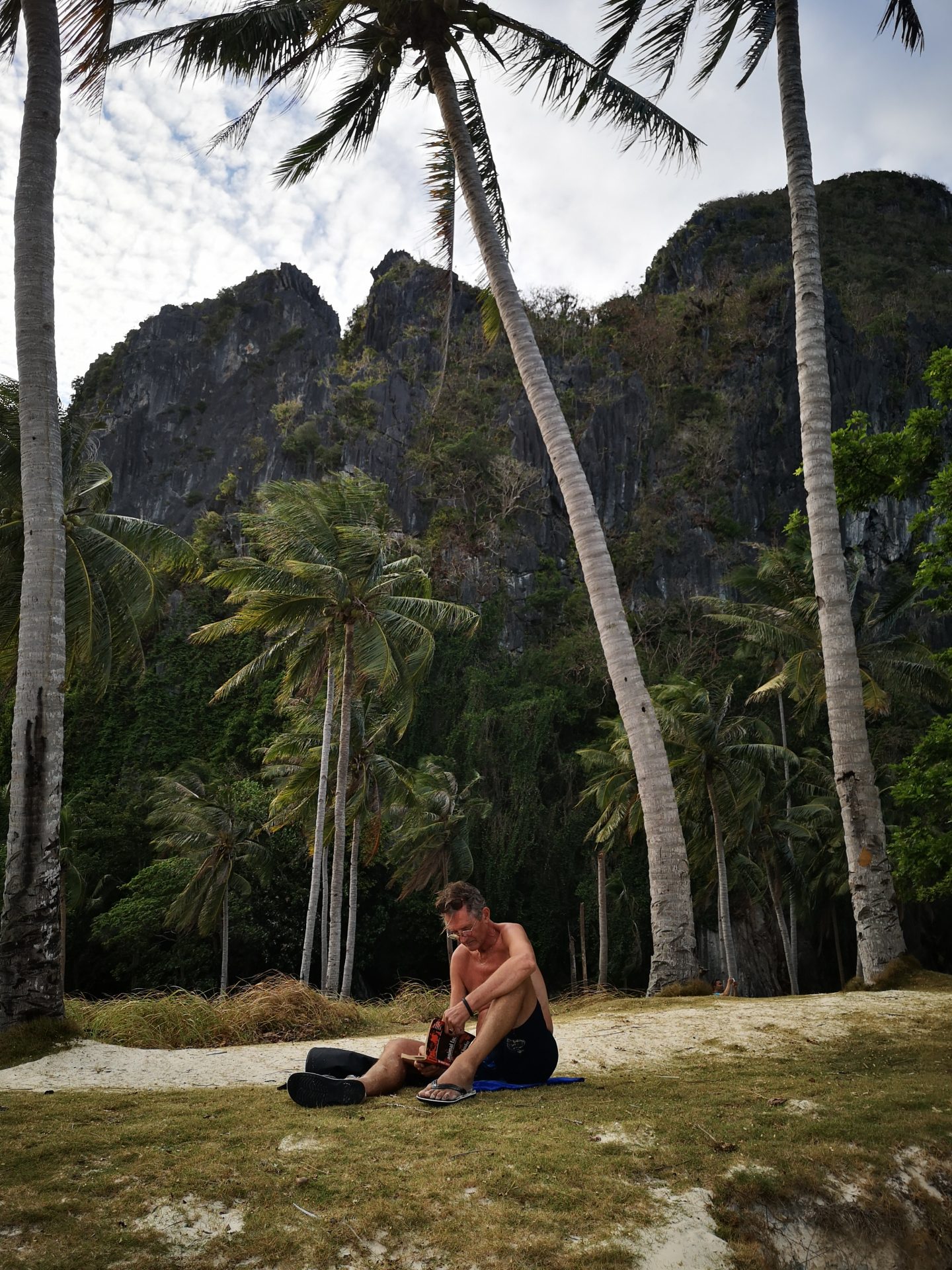 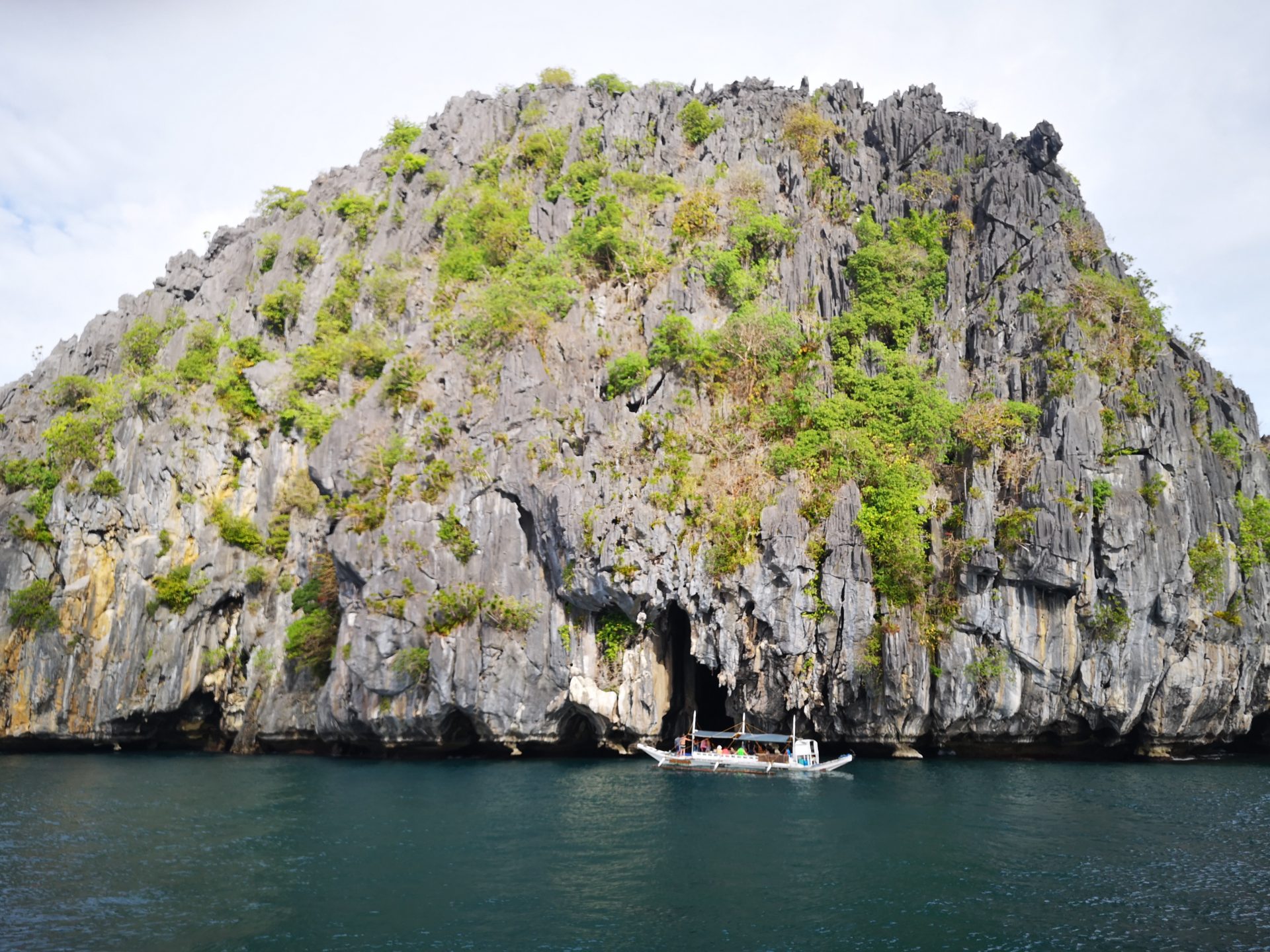