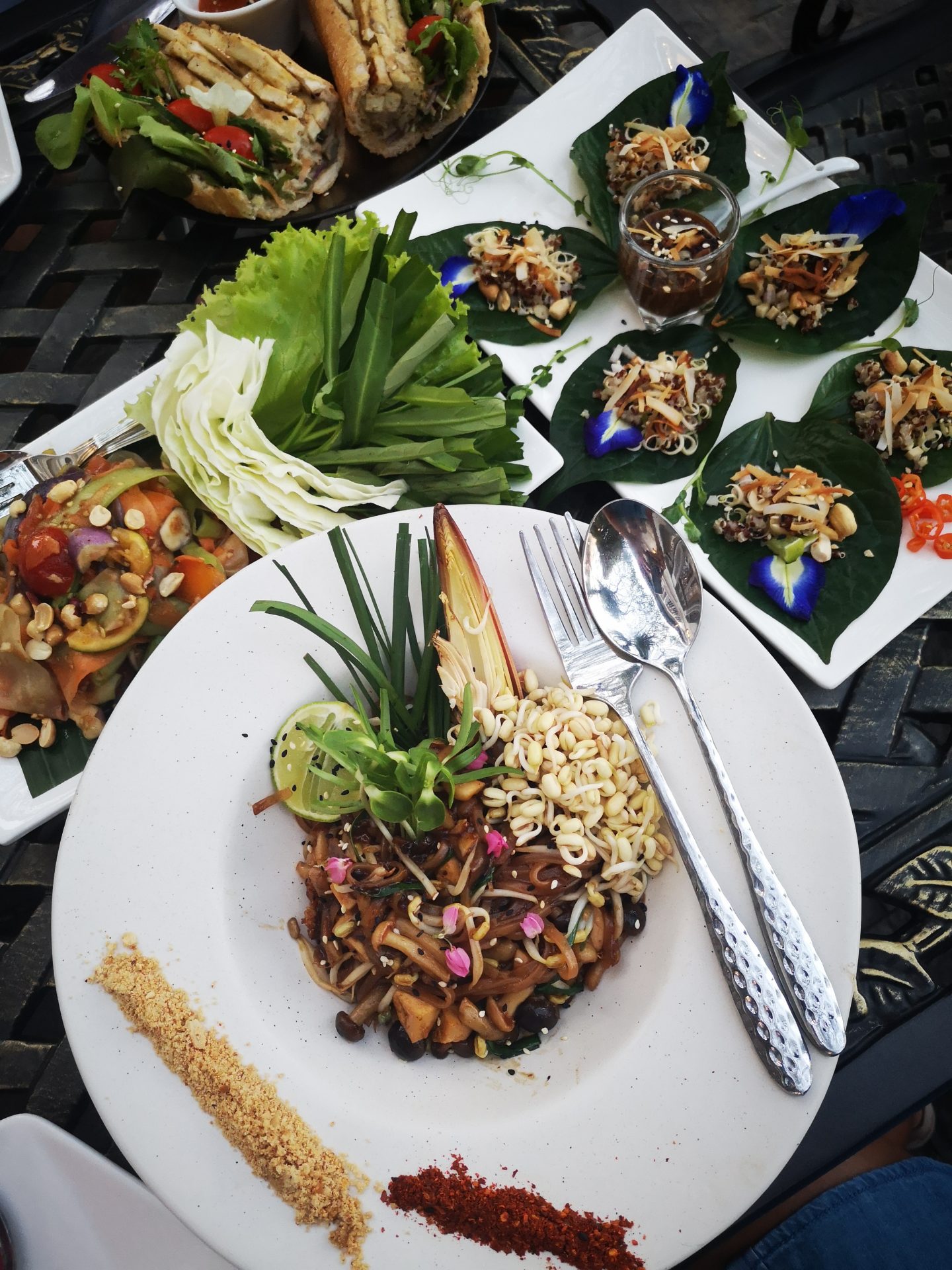 Vientiane – The Capital City of Laos

Jo contracted the chikungunya virus about five weeks ago. She is over the worst of it but there are still lingering symptoms. A general fatigue, especially in the morning, a stiffness of her joints whenever she is inactive for any period of time – not as severe as before but still there. She’s much better when she’s active. And she’s had a throat infection, which has been quickly cured with antibiotics. So she’s not 100% and this will affect our plans for Laos. We will slow right down, stay longer in comfortable accommodation and continue the process of recovery. That’s the plan.

Vientiane is the languid capital city of the land locked country of Laos. Being a European, one tends to quickly recognise the familiar and whilst it is a charming Indochinese city, it’s the French characteristics that I see. That’s understandable, it was the French that set out the city design and architecture in the late Victorian era. And they remained here throughout the 20th Century, even during the country’s bloody civil war from 1953 to 1975.

In the 1970s, when it was populated by spooks and journalists and renowned for permissiveness and cheap opium, a British diplomat referred to Vientiane as a rather sordid Garden of Eden. It still has the air of a leisurely, rather rundown French colonial town. There are plenty of charming Gallic style restaurants, cafes with sidewalk terraces, coffee shops and patisseries. But inevitably the Chinese are here, witnessed by the big construction sites of impending shopping malls and office blocks. 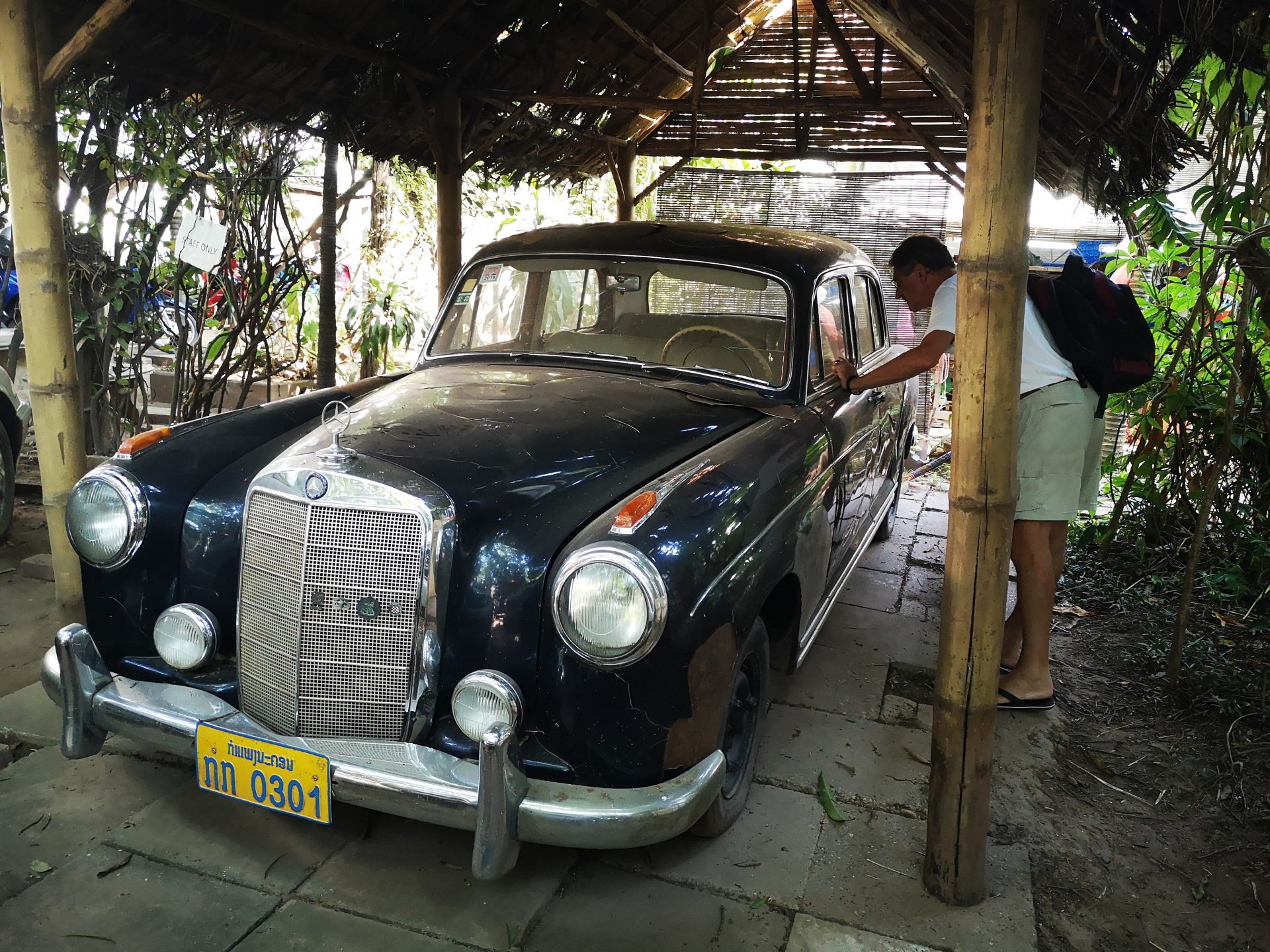 I Spotted This Outside An Old Villa – Mercedes 220 – About My Age!

The Lao people have a calmer temperament than those I’ve experienced in Myanmar or The Philippines. The city is quieter; no blaring music or incessant hooting of car horns. The crowds are less dense, less animated and not in such a rush. We’re not hassled. The Lao have been described as the least urgent souls on earth (according to the English writer Norman Lewis, who traveled extensively through Indochina, “It is considered ill‐bred and irreligious in Laos to work more than is necessary,”) It’s a carefree kind of place which suits us fine!

We travelled overnight from Puerto Princesa to Manilla, then Kuala Lumpur to Vientiane. The first flight from Puerto Princesa was three hours late which almost jeopardised the entire schedule. It was a close call – to disembark one plane, traverse multi terminal Manila airport, negotiate security and immigration and board another plane in less than two hours was challenging. Did I say something about slowing right down? 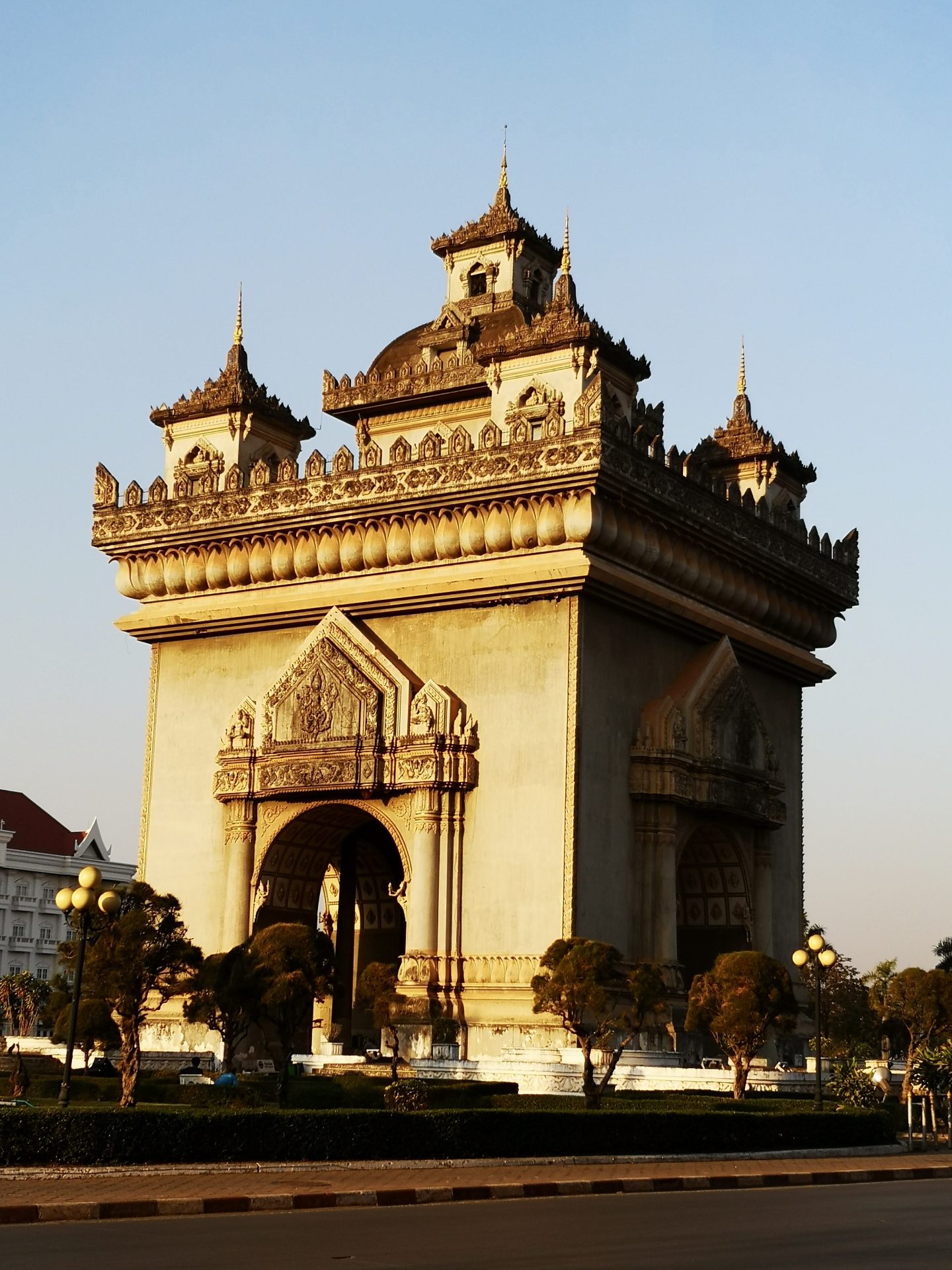 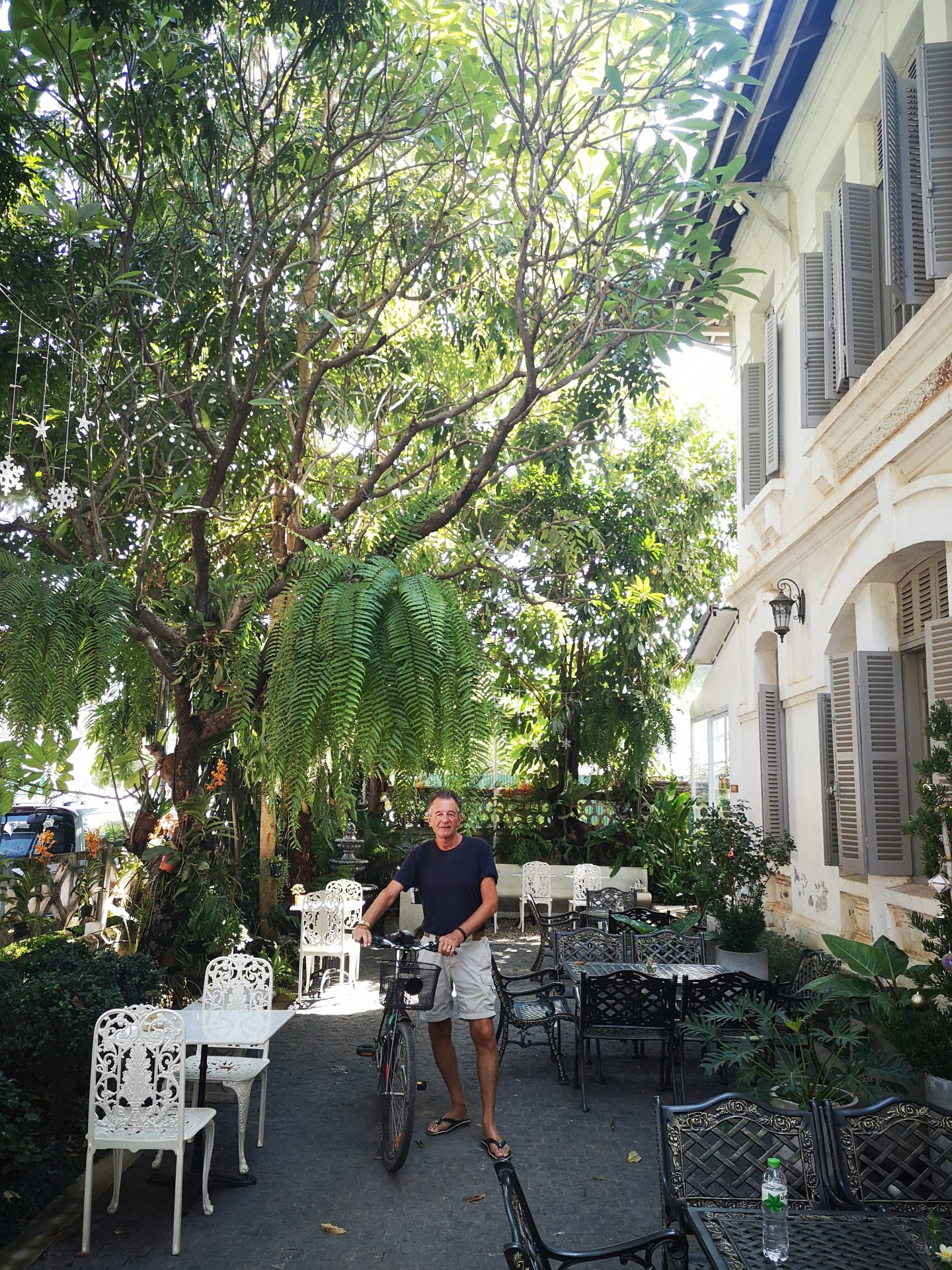 The temperature in Laos is very comfortable, especially in the morning, and it’s not polluted. We hire a couple of bicycles for £2.50 a day  – that’s for both of them, the same cost as a single ten minute tuk tuk ride into town. The cafes have Belgian beers on the menu. It’s a little bizarre. We cycle around the small area that is the city centre and visit the minor temples or wats. At the end of the wide frangipani tree lined boulevard of Th Lan Xang stands Vientiane’s replica of the Arc de Triomphe – the Patuxai or Victory monument. It looks great from afar but it’s a concrete monstrosity up close, built in 1969 with cement donated by the USA intended for a new airport.

We shop for more deet mosquito repellent, the most effective repellent available. Southern Laos is malaria territory. Jo buys some light clothes that will cover her arms. There’s a bookshop in town rather cleverly called Starbooks, but the one I visit is the Book Cafe buy and swap shop – swap a book plus £1.50 to get another. I swap a coup!e of books I’ve read for a copy of Love, etc by Julian Barnes. It’s a novel of a love triangle spanning over ten years. Stuart appears guileless but is successful in business, Oliver is a lazy, patronising, puerile failure, – they’ve been friends since schooldays. Gillian is controlling but out of control. She marries, Stuart, divorces him and marries Oliver! He portrays these characters and their relationships with great skill and wit. I also acquire a very browned but intact and readable 1966 Penguin paperback of Bernard Malamud’s Idiot’s First – a book of his short stories. Malamud was a Pulitzer prize winning Jewish American author. I’ve read his later novel Dubin’s Lives. He writes brilliant dialogue. I’m finding some gems. Shopping and cycling is interspersed with stops for fresh coconut, ice cream and coffee. Cycling is such a great way to move around and enjoy Vientiane. 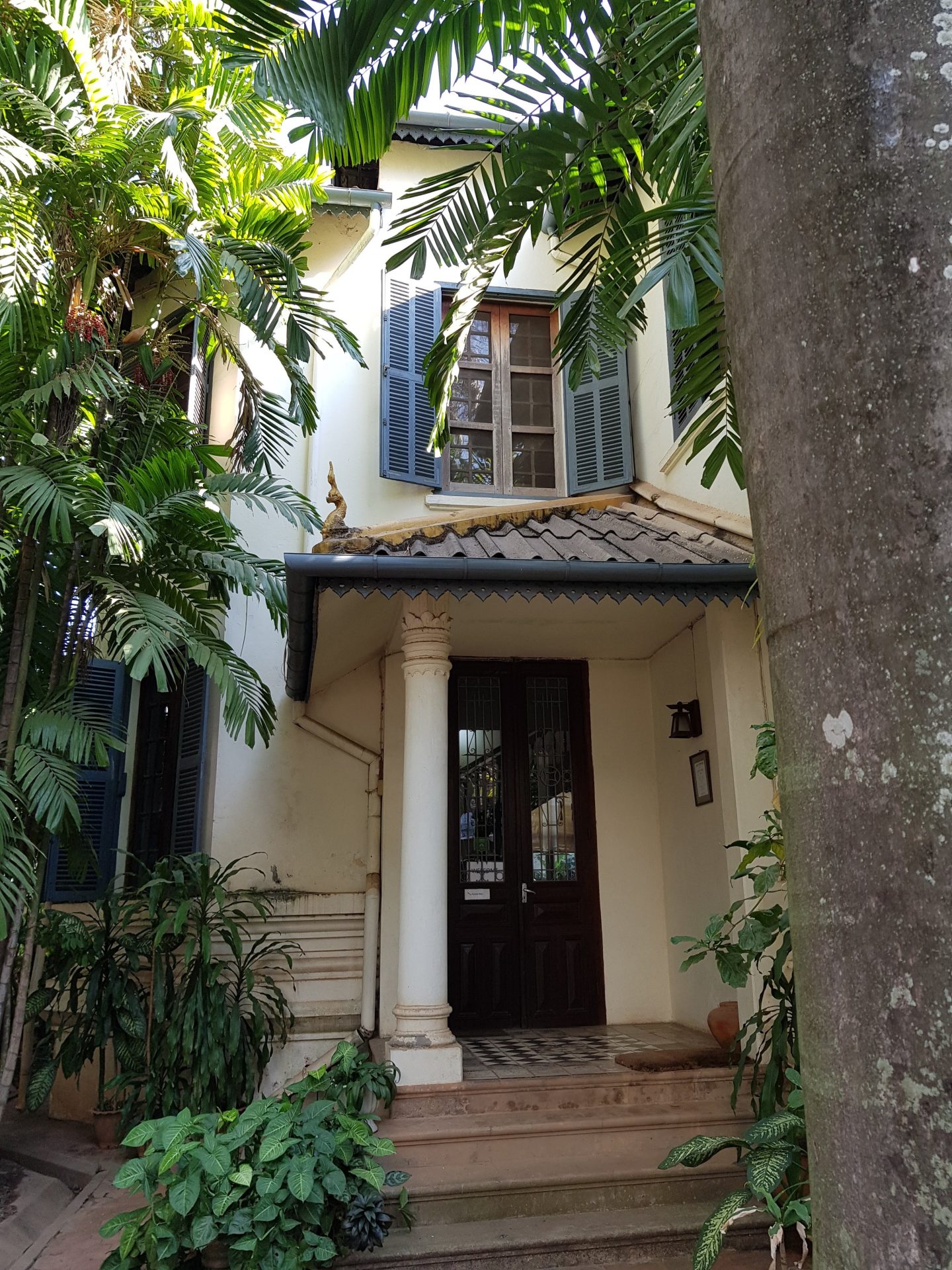 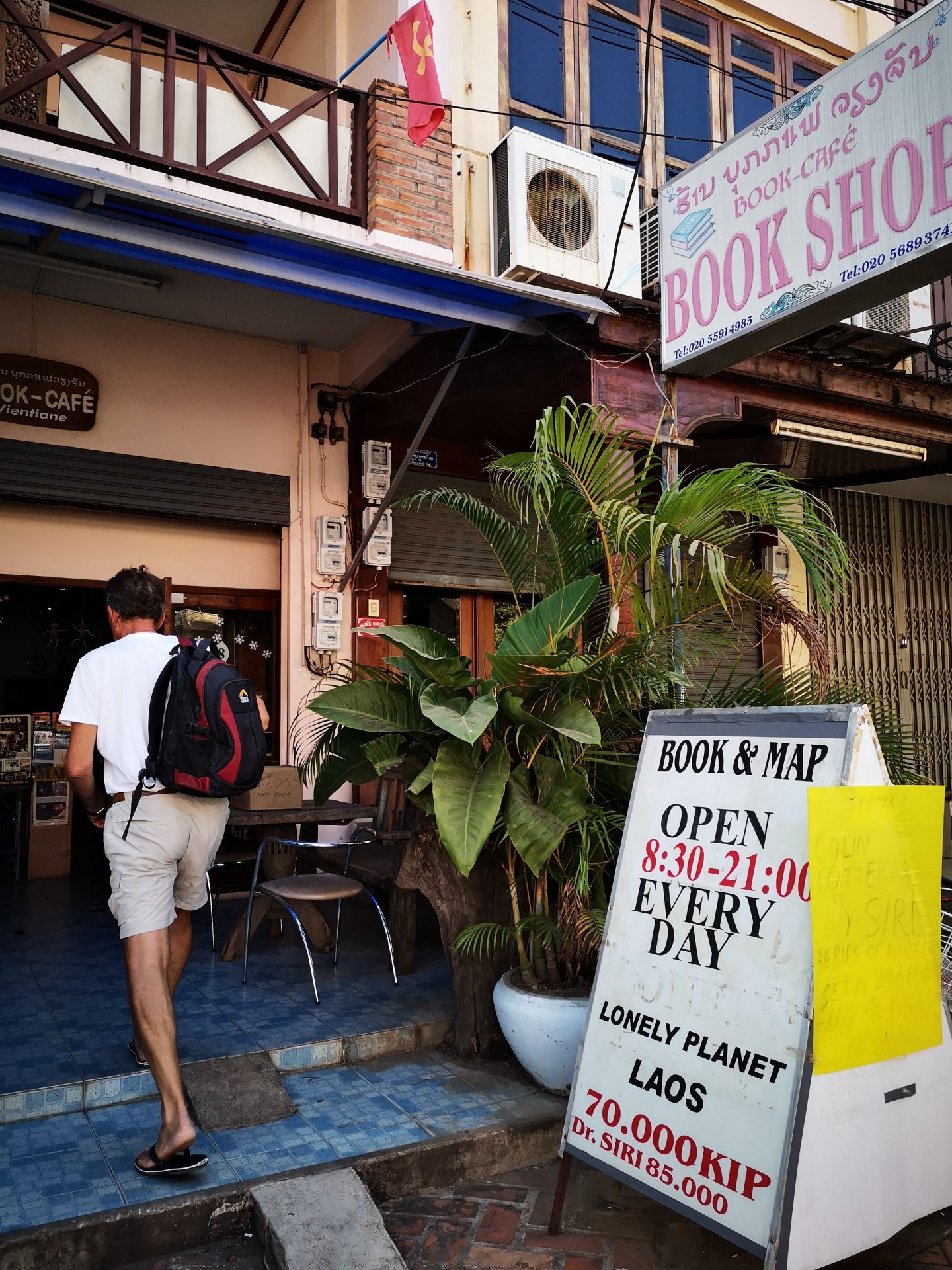 On The Hunt For A Good Read at The Book Cafe.

In the afternoon we visit the COPE Visitor Centre. COPE (Cooperative Orthotic & Prosthetic Enterprise). During the Vietnam war, in an attempt to hamper the supply lines of the North Vietnamese army along the eastern border of Laos with Vietnam, the famous Ho Chi Minh trail and also to attack the communist army in Laos, the Pathet Lao, the USA employed the tactic of massive aerial bombardment.

In the late sixties and early seventies more bombs were dropped on the territory of Laos than on the whole of Europe and the Pacific in World War II. The USA conducted over 580,000 bombing missions over Laos, dropping over 2 million tons of ordnance. To appreciate the scale of this, it’s the equivalent of one bombing mission every eight minutes, 24 hours a day for 9 years. That’s an awful statistic, but if you consider the small size of the country and the fact that those bombs were dropped in just the north and along the eastern border with Vietnam, it’s horrendous. A considerable number of these bombs were anti personnel cluster bombs. What initially drops out of the bomber aircraft looks like a conventional cylindrical bomb, but in an eerie, almost biological fashion it opens up in mid descent to disgorge hundreds of tennis ball sized bombies. These bombies were designed to explode on impact, scattering their ball bearing encrusted shells to kill and maim with brutal efficiency. 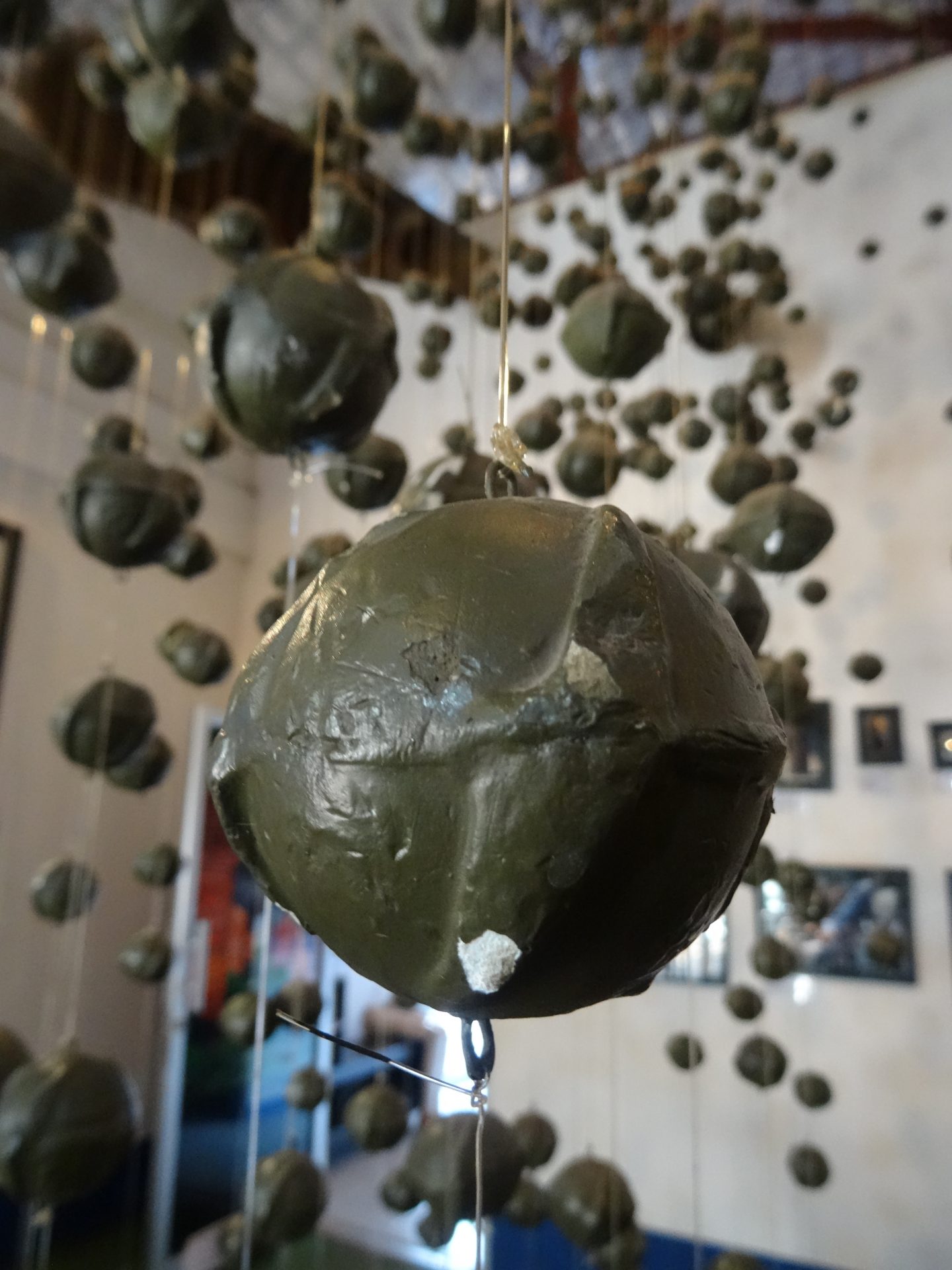 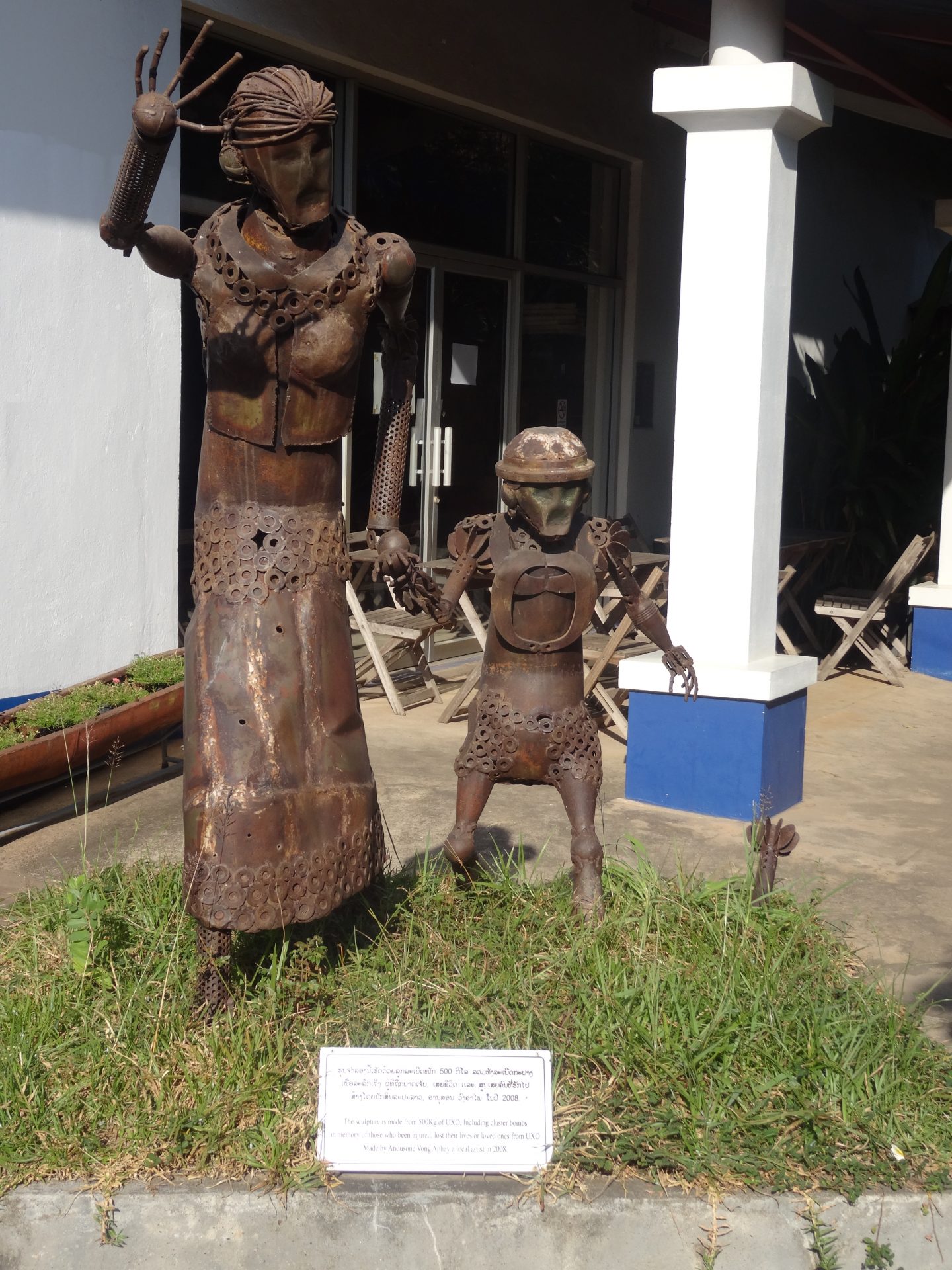 This sculpture, in memory of those who have been injured, lost their lives or the people they loved, is made from 500kg of old ordnance including cluster bombs. 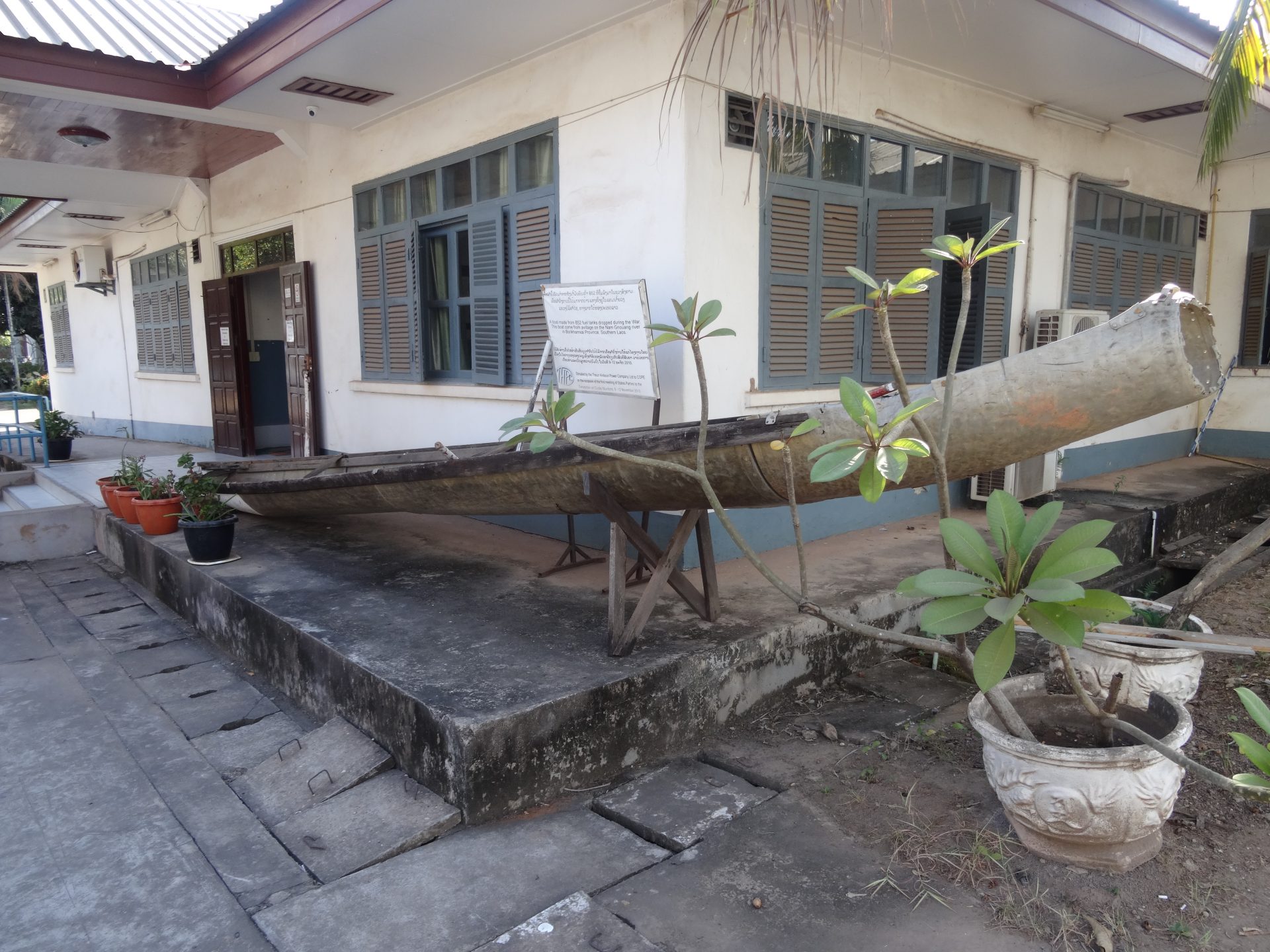 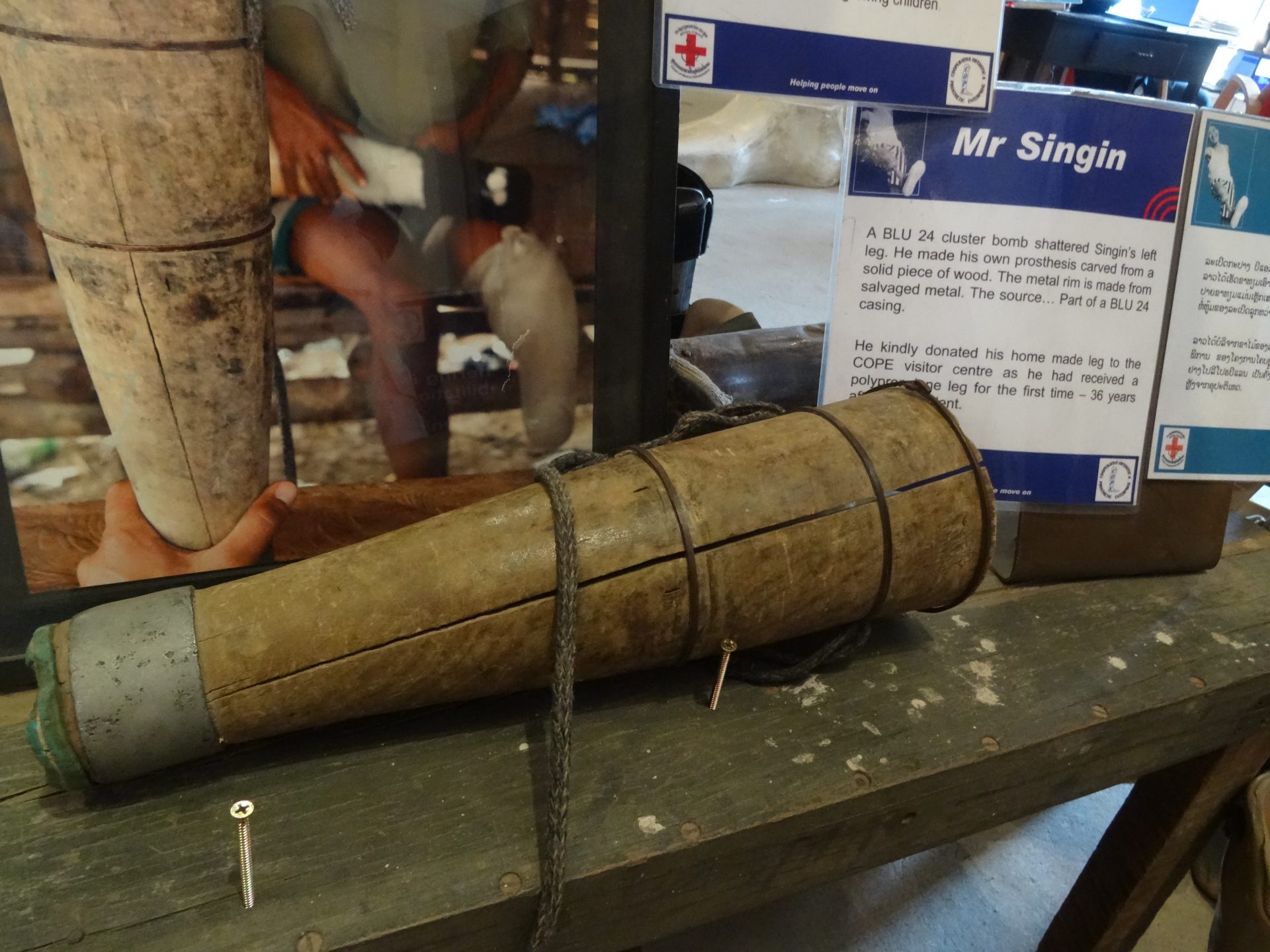 A Prosthetic Leg made by a victim of a cluster bomb. It’s carved from solid wood and the metal rim is made from the salvaged rim of a BLU24 cluster bomb! The victim, Mr Singin, wore it for 36 years before COPE made him a new one.

Over 270 million bombies were dropped on Laos. Unfortunately, whether by design or accident, 30% of them failed to explode. Consequently, after the war, 80 million bombies remained on the surface or slightly embedded in the earth. And after fifty years, millions of them are still there, contaminating a quarter of all villages in the country. In the postwar period to 2011, over 20,000 people have been killed or injured by these leftover ordnance, known as UXO, or unexploded ordnance. And almost half of those killed and injured are children. The metal tennis balls don’t look particularly threatening, it’s a ball, so kids will pick them up and play with them. They’re also encouraged by unscrupulous dealers to collect them for scrap. Farming, building, wood collecting, even cooking, which can trigger an explosion, are all potentially hazardous activities in contaminated areas. Hundreds of people continue to be killed or maimed every year.

COPE is the main source of artificial limbs, walking aids and wheelchairs in Laos. In the aftermath of the war people made their own crude artificial limbs or went without. The COPE charity provides surgical and rehabilitation services, mobility aids and prosthetics. Their visitor centre is free (a donation is requested) and it tells the grim story of UXO in Laos.

Then there’s the ongoing job of decontamination which is slow, labour intensive and expensive. It is reckoned that it could take 150 years to clear the land of UXO. In 2016 President Obama became the first US president to visit Laos.  He visited the COPE centre and pledged 90 million US dollars to help the ongoing clearance unexploded ordnance. 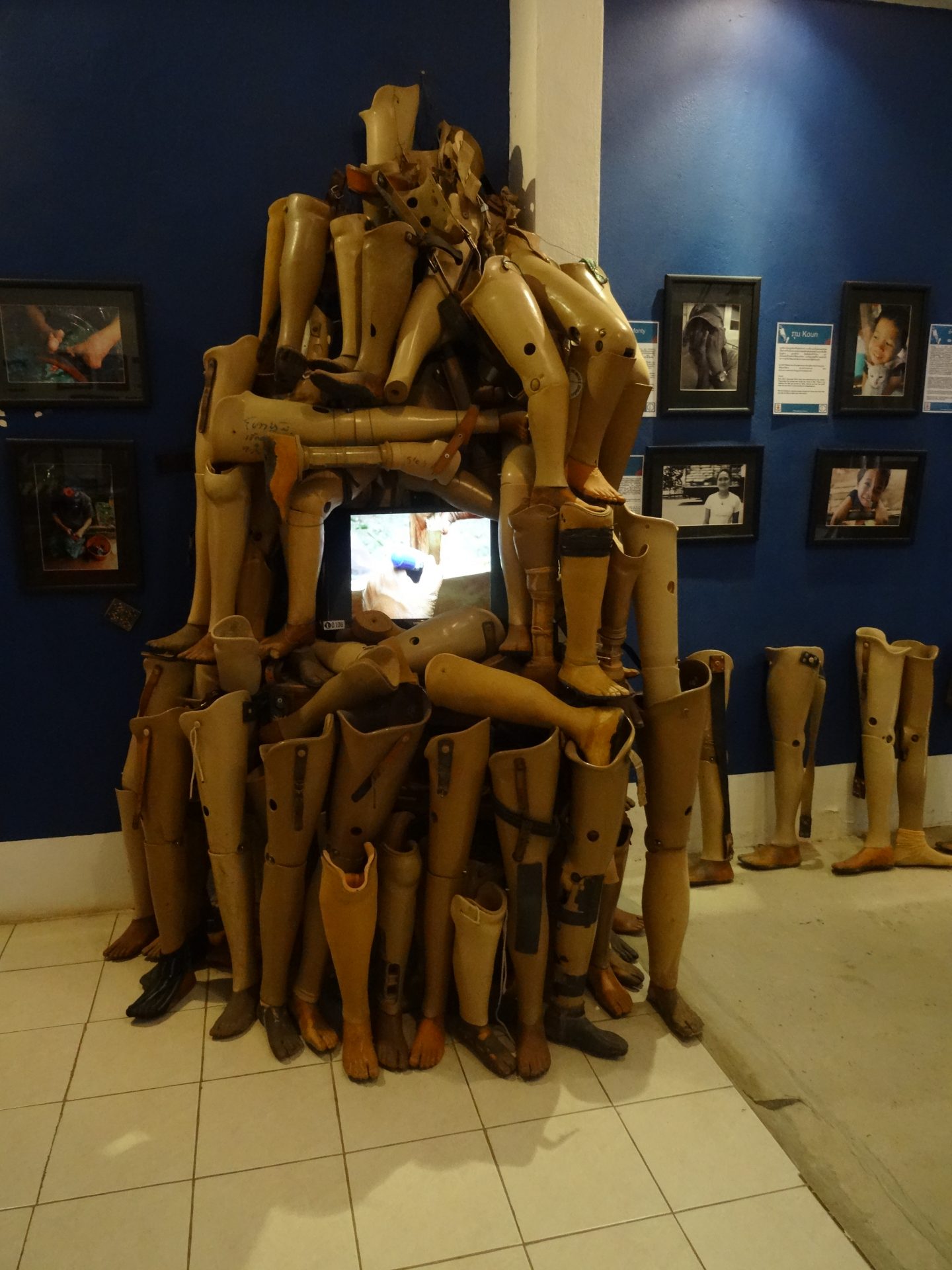 Laotion food is very good and with a contemporary Gallic twist it’s superb. In the evening we walk to a fine French colonial villa that is a restaurant called The Living Library – it used to be the National Library but any current connection with books is vague and of little interest. It’s a vegetarian restaurant and the food is an art form with ingredients such as lotus stem, green banana, papaya, wild piper leaves, toasted coconut, quince, galangal, ginger, assorted wild mushrooms and proper French baguettes. It’s simply delicious and healthy. And a far cry from the awful food in the Philippines. Two starters, two main courses and drinks cost £14. After which we walk to a local bar called Atmo and spend the same amount on a gin and tonic and a few beers (one of which was a too expensive Belgian Duvel – but I couldn’t resist).

After drinks, we walk back to the hotel and I spot a dapper going dude sitting on a motorbike. He’s wearing a bowler hat and is sporting a work of art tattoo on his right arm. Jo loves to get a portrait photograph of a character. I point him out to her and she asks him if it’s ok to take his photo – she always asks. He’s flattered and turns his tattooed arm towards the camera. Smile says Jo – she always asks! He offers a cool wry grin. It’s a nice portrait shot. 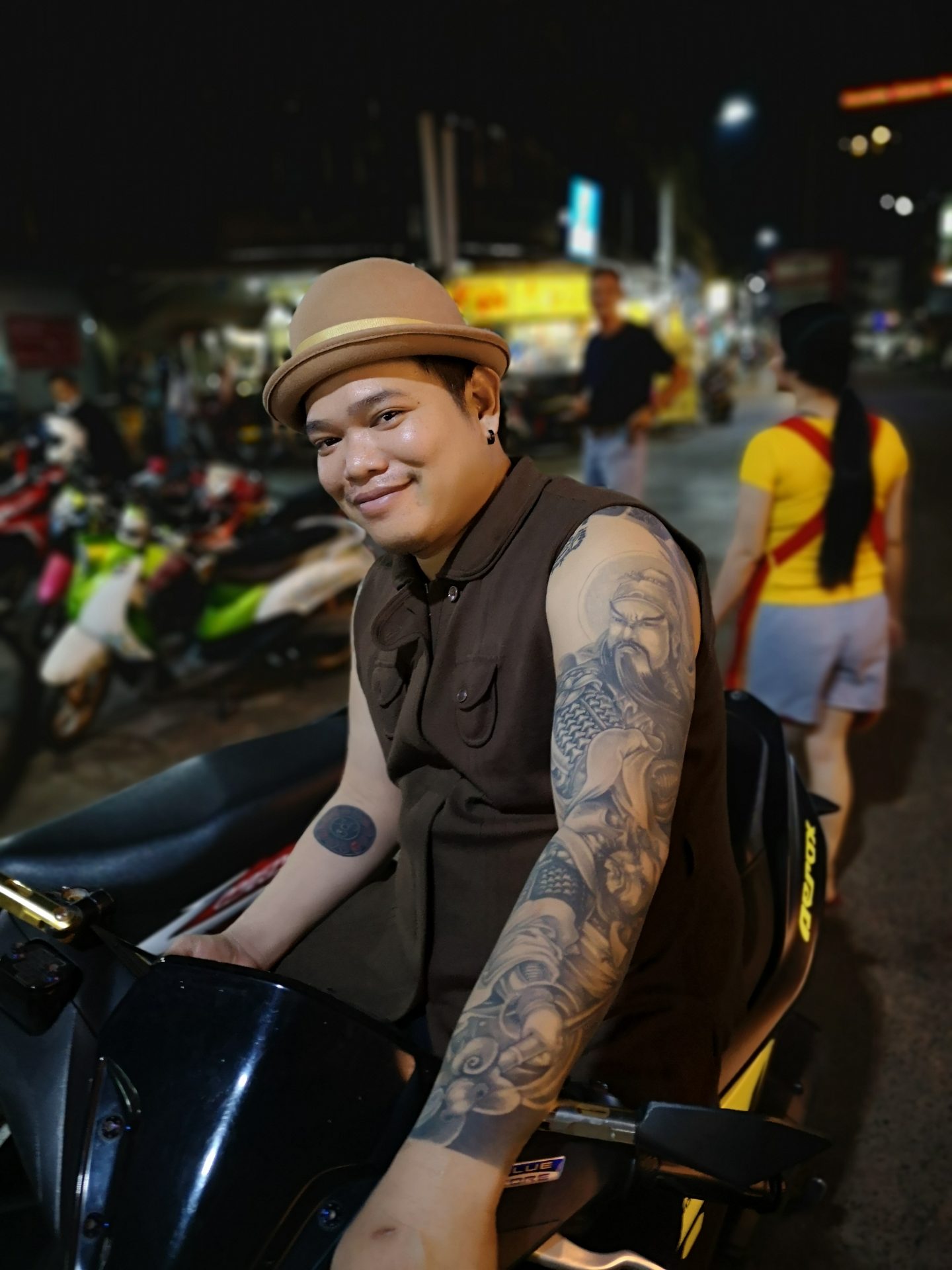 We are staying in a first class hotel – The Azalea Parkview.  We have a big bright comfortable room, a superb shower, quality WiFi and a rooftop swimming pool. Breakfast is one of the best we’ve enjoyed for weeks. And all for £30 a night. The downside of a great hotel breakfast is that we haven’t tried any fresh local croissants which sell out in the morning. It’s tough in Laos!

Tomorrow we will take a bumpy nine hour overnight bus ride north to the ancient royal capital of Luang Prabang.

An aerial view of Jo on the rooftop bar called the Tipsy Elephant and at the Living Library Restaurant. Oh and a cracking gin and tonic with cucumber and black peppers.