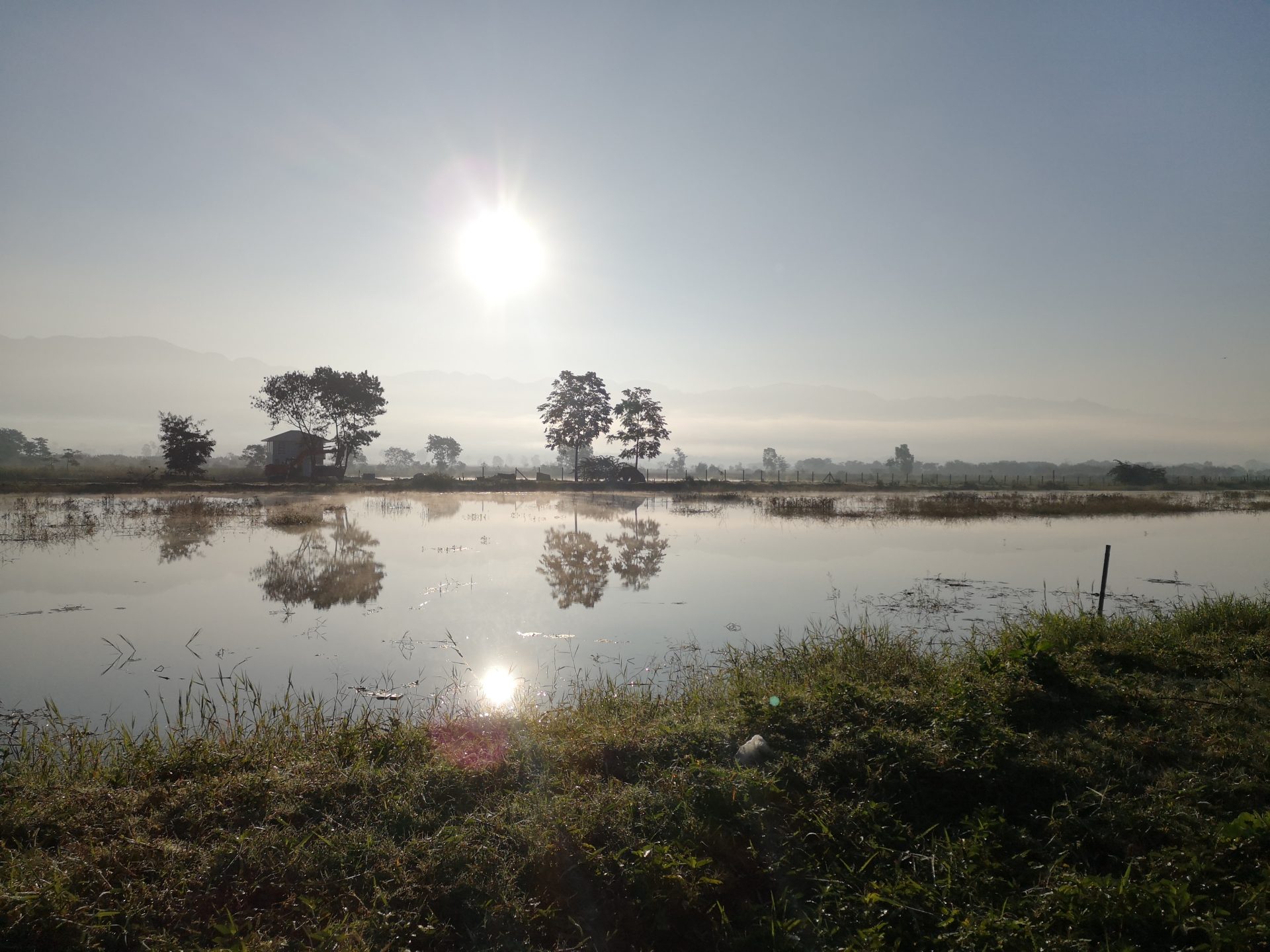 Running in Nyaungshwe and Mandalay, Myanmar

R unning enriches my life.  If it wasn’t for running, I’m sure I’d miss out on a plethora of experiences.

The first time I venture out on my own for a run in an unfamiliar place at the crack of dawn, I go out tentatively.  Carefully remembering every turn I make to ensure I don’t get lost.  I slow and walk past the scrofulous dogs to check how they will react.  I’m cautious not to go too far off piste.

The second time I go out for a run, I have more confidence, I’ve grasped the nature of the area and I jog out for an adventure.  I run to explore and to get a little lost.

If I have three days and I’ve had time to read the guide book, then my third run is usually to a pre planned destination.

This pattern occurs in Nyaungshwe, a small town near Inle Lake where we haul up to relax after our three day trek from Kalaw. 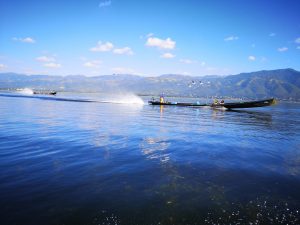 The trek through the varied countryside from Kalaw and the exhilarating long tail boat ride across Inle Lake was such a joy, I felt a little flat upon arriving in Nyaungshwe.  Dumped onto a scruffy jetty, it was hot, noisy and bustling and the little market town appeared to have been given over to the tourism boom – a hodgepodge of restaurants, hotels and small tour companies.  From two weeks of experience, I’d say that the Burmese love to celebrate and make noise. Arriving on a Saturday, yet another religious festival was being transmitted from loudspeakers.  I was in post trek shock.  It was late afternoon and we retreated to our hotel for a much needed shower and hoped for a good night’s sleep.

It is not to be.  Awake at 3am and still at 6am, there was only one thing to do.  As often occurs, I leave Armand sleeping, put on my running shoes and head out.

Tentatively, remembering every turn, I run behind the hotel along a dusty, pot holed lane to discover the early enterprise of the local residents.  Leaves are being swept, hair is being washed at communal water tanks or taps.  Stalls are being set up in the colourful Mingalar market.  Doors with flaky green paint are being opened to reveal little kitchens brewing up green tea and cooking curries ready for the day.  Entrepreneurial shop keepers busy themselves stacking their wares.  Children with their tiffin lunch boxes are cycling to school in green longyis, a sarong style long skirt worn by both men and women.  Mopeds speed by with their pinion sitting obligatory side saddle.  The early morning scene is delightful and away from the main thoroughfare, I discover the real Nyaungshwe and warm to it.

The next morning I am eager to get out again.  I am going to go in the other direction to see what lies behind the town.  It’s 6am.  I feel safe as I run.  Single female runners need not fear that they may be intimidated by the men of Myanmar.  Today, I am greeted as I run along the dusty tracks.  The people are helpful.  I slow as I approach a pack of feral dogs.  One is particularly bothersome.  He seems only partially sighted, and clearly believes that I have food in hand, not a mobile phone.  A kind man dressed in orange culottes, flip flops and a blue anorak spies that the dog is thwarting my run.  He blocks the dog’s path and allows me on my way.  “Tea zoo tim by day”, my phonetically learned “thank you” I say and he nods an acknowledgement. 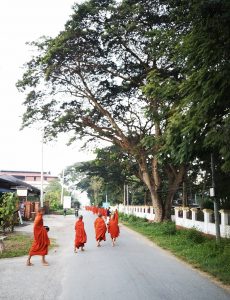 I stumble upon the Monastery Quarter.  Laid out in a grid system, there’s block after block of monasteries and pagodas and schools.  There must be a monk or nun for every person inhabiting the town for I run for three miles around huge complexes, each with its own gate and temple and gilded stupa.  I have caught the morning procession from the sites and there are queues of monks and nuns of all ages, each with a food bowl, walking through the streets, collecting alms.  They are met by the locals and receive from their benefactors a food offering or cash in lieu.  Preschool, teenage and elderly monks in either, saffron or deep red robes.  Nuns in light pink, some with red parasols.  All with clean shaven heads.  For many, particularly young girls, joining the monastic order is a way of escaping poverty or worse situations.  All monks and nuns receive a free education, two meals per day and clothing.  Some of the older monks pull shopping carts and offer blessings to kneeling locals in return for breakfast. 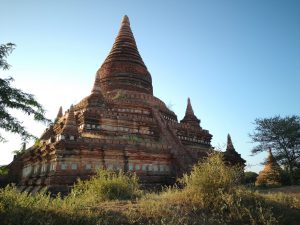 The people of Myanmar seem generous.  Many have very little, but they seem to share.  Later in Mandalay, we stop for green tea and the elderly proprietress refuses to take any payment for it.  However, this generosity is a little self serving.  Akin to other religions, Buddhist people in Myanmar believe that they can acquire ‘merits’ in doing good deeds and this will stand them in good stead for the afterlife, Nirvana.

In some ways, the overwhelming need for ‘merits’ caused the destruction of the once prosperous Burmese Empire of Bagan.

Around the time of the Battle of Hastings, 1066, Bagan in Myanmar, was thriving. It was the rice bowl and commercial centre for Upper Burma, but in a frenzied desire to acquire ‘merits’, the Kings and noblemen of the time raised 3000 temples, pagodas and stupas to Buddha in Bagan.  Although these are a fantastic piece of history for us to see today, having almost two thirds of upper Burma’s available agricultural land given over to religious purpose by 1280, left little upon which the country could raise revenue.  The country shot itself in the foot in just 200 years.  By the time the Mongols appeared at Burma’s border in 1271, upper Burma was practically a pushover and a new era began.

I return from my second run feeling that I have more of a sense of the people and the country’s rich history.

We have taken to cycling around the town during the day, as our hotel has a few ropey free bikes available.  Without gears or lights, but with brakes thankfully in order we manage a couple of good, interesting rides. However, I can’t convince Armand to cycle to yet another ancient monastery on the outskirts of town, despite my reciting the guidebook blurb.  Being a couple of miles north, I decide that Shwe Yaunghwe Kyuang, a teak hall monastery is going to be the destination for my third run. 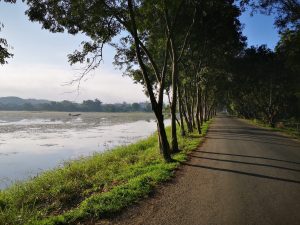 I’m up earlier than usual and I have my route planned.  Wearing a shoulder covering T shirt and folding and wrapping a light pair of trousers around my middle like a waist bag, I stuff a few thousand kyats into the pocket of my shorts and set off down the dual carriageway.

This road is not busy and is set pleasantly alongside the water with a green central reservation dotted with trees. It is hot, even at this time of the morning. I arrive at the monastery and purchase water from a stall opposite.  Cooling, I pull on trousers over my shorts, remove my shoes and socks and enter the quiet sanctuary.

I am the first visitor of the day and the place is not ready for me.  The teak oval window shutters to the stilted building are still closed.  Monks sleepily descend, adjust their robes and wash at the storage tanks.  A huge wooden gong is struck and the resonant, echoing sound sets the stray dogs howling at the sky.  More monks descend from the hall.  The ancient shutters are opened and the days chores, the sweeping of the decks are commenced.  I climb to the hall.  The wooden ceiling has an inlaid diagonal pattern.  Like a galley of a pirate ship, all dark wood and porthole windows, the shrine is overseen by a golden image of Buddha who has a red shawl draped around him.  He sits upon a bejewelled platform amongst vases of flowers.  Surrounding him are other smaller, ancient and varied images of Buddha.

It’s quiet, just me and the three preoccupied monks.  I’m not at all spiritual, but it’s so beautiful and serene I feel compelled to leave a donation.  The teenage monks look up from their sweeping and smile at me.  I am leaving just as the taxis, tourists and guides are arriving.  Soon the monastery will be overrun by coach parties and this peaceful place for reflection will become a noisy tourist attraction.  I give my own thanks for the benefits of being an early morning runner. 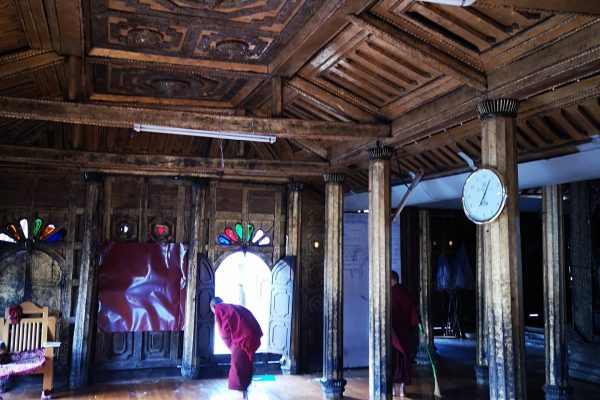 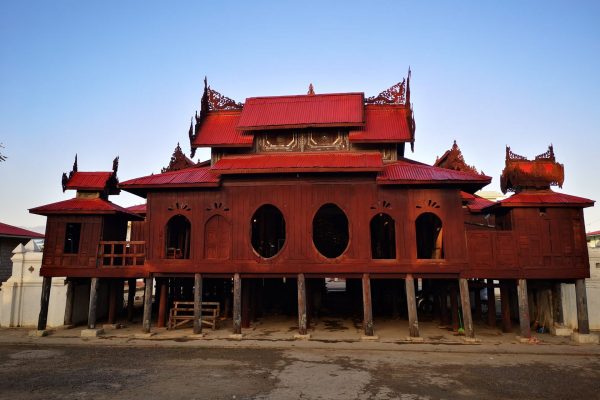 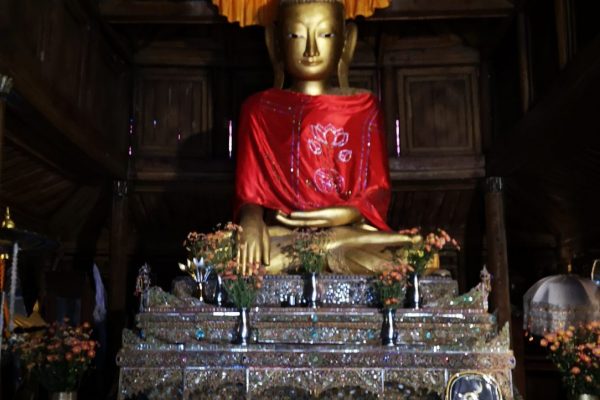 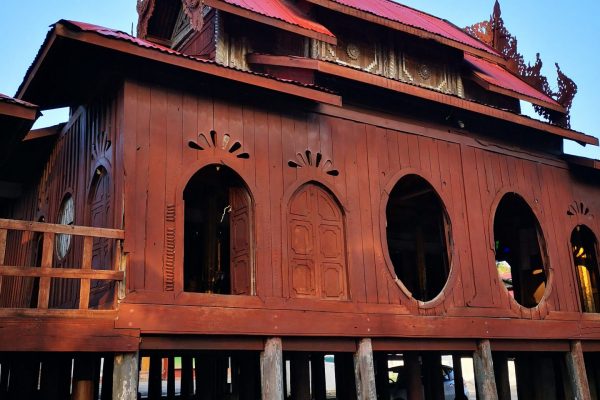 Jogging back, I spy a rickety bridge.  I love bridges.  I have to cross them.  I once took the kids on a road trip up one side of England, along Hadrian’s wall and down the other side of the country.  We had to stop to view bridges along the way, including Newcastle’s blinking eye bridge and Middlesborough’s gondola bridge.  They’re not on everyone’s list of must sees, but I think they’re fantastic.  My children think I’m mad, but I think it’s those trips they’ll remember.

I digress.  I cross the wooden bridge and wind past local homes to finish the four mile trip by following my nose back to the hotel.  I find Armand still sleeping, again unaware that I’ve been out on an adventure.  And that’s how it is.  Just fine.  Running in the mornings, I get my own peaceful, personal time and space.

I’m now in Mandalay and it’s tough to find anywhere to run.  Pollution, both noise and fumes make running unpleasant.  The pavements are not for pedestrians, but for building materials, kitchen seating areas and stalls, forcing pedestrians into the busy roads.  Wits are required to flee speeding mopeds and tuk tuks. 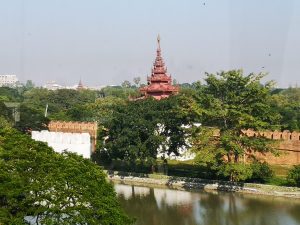 Despite this, the local people seem keen to keep active.  In downtown Mandalay the place to walk and stretch and exercise, (Thai chi or Mr Motivator style) is next to Mandalay Palace.  There’s a high, red brick wall interspersed with turreted gateways enclosing the palace alongside of which runs a path.  Next to the path, a moat.  A wide expanse of water, it acts as a buffer zone between the busy main road and the path and so, here some peace, tranquility and air can be found. 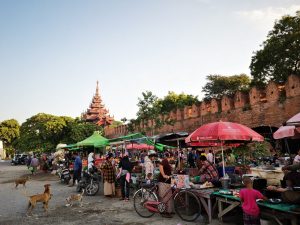 There’s a small market on the north side of the palace.  It seems only the north and south sides of the wall are well used.  My run along the path is often solitary.  The path is fairly well maintained.  Solid.  A few trees provide some shade but it’s hot even at 7am.  People pleasantly return my “morning” greeting.  There are checkpoints at the palace gateways.

Uniformed and armed military personnel watch me as I run towards them.  I signal and point ahead and give a thumbs up to check it’s ok to continue.  They wave me on.  As I pass one military post, I’m suddenly joined by a very young soldier, rifle on shoulder.  I’m nervous.  It’s a quiet stretch of path.  However, he’s smiling at me and he has a sweet, happy young face.  He pushes on and overtakes me.  After 200 metres there’s a whistle.  He stops in his tracks, turns to face me, smiles again and makes to return to his post.  He’d been sent by his superior for some exercise.  I’m alone again.

I didn’t mean to run so far, but once I see a circuit, I’ve just got to complete it.  It’s 5.5 miles around the palace.  Almost a 10km run from any downtown hotel.  I’m on fire when I get back to the hotel and head straight for an ice cold shower.  It’s not till the next day when I check my running app, Strava that I realise that I’m Strava’s first recorded woman to run the Palace.  I’m chuffed.  I ran Mandalay Palace and I took the crown!