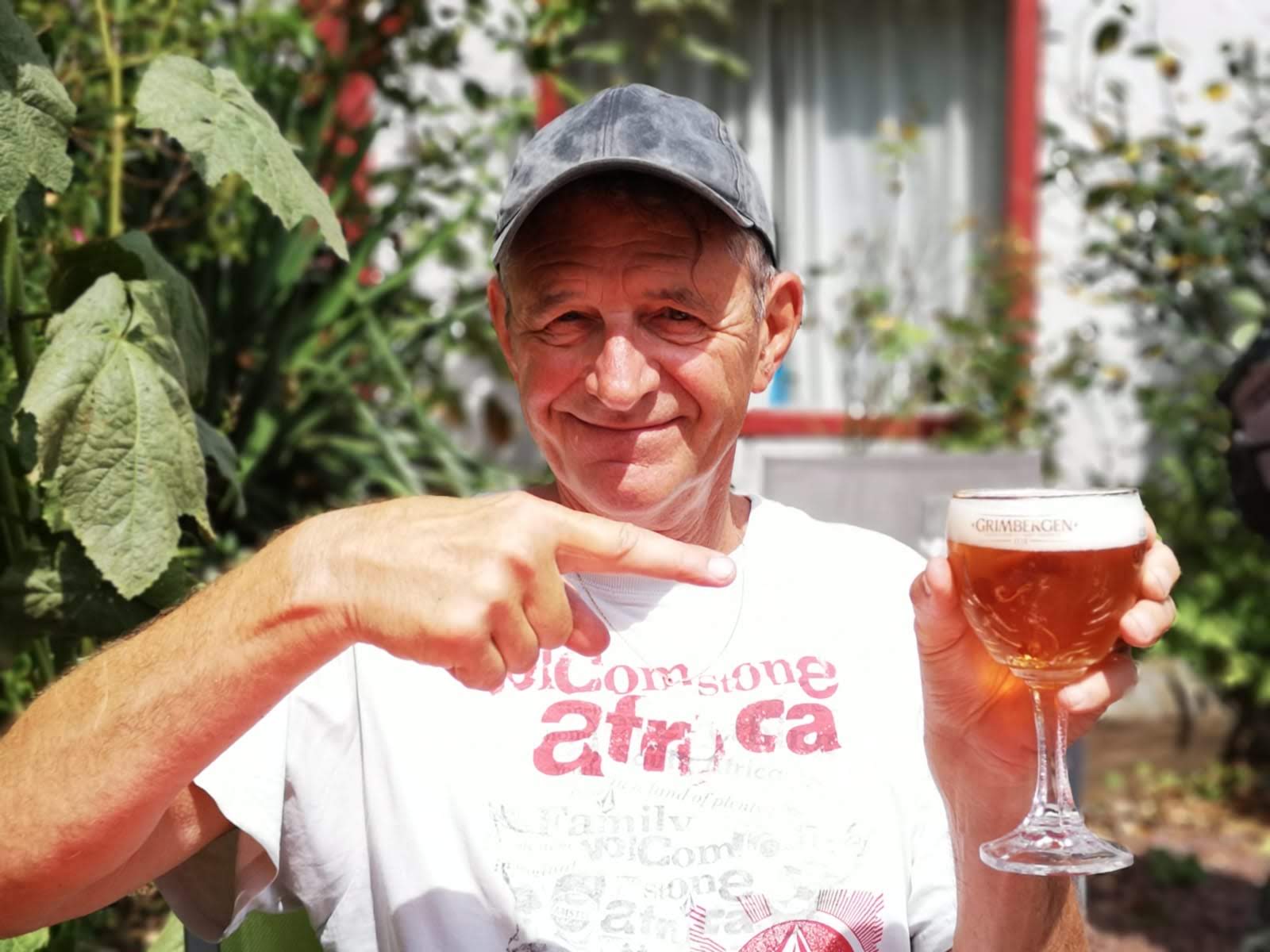 It’s Not all About Belgian Beer

The beer is something special. On our cycle through flanders to Leuven it became our habit to stop at the end of every day’s ride at a cafe and drink a beer or two accompanied with a little food. 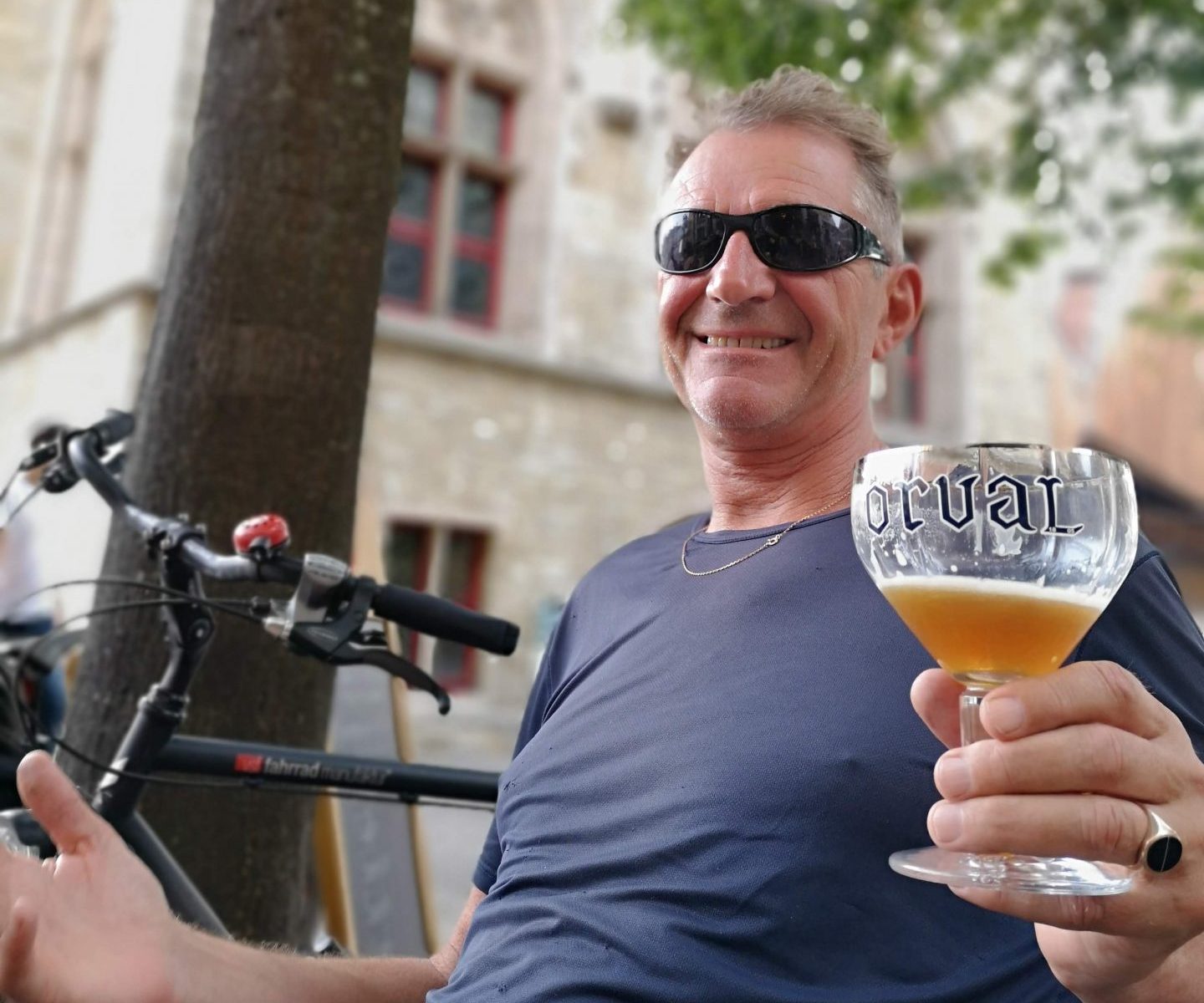 Armand with an Orval in Ghent

It’s also about the best filter coffe in the world

At home in England I enjoy a decent ale (Sussex Harveys best bitter is a favourite) or a Guinness. I don’t drink lager in England as it’s invariably flat and a lager should never be served flat. And I find the contemporary craft beers tinny and insipid.

Belgian beer is splendid. I started drinking it before the age of seven! I kid you not. In my mother’s village of Noorderwijk Belgium there used to be a brewery called St. Bavo. They brewed beer for 126 years and went out of business in 1962 (when I was 7). They produced a sweet dark low alcohol (about 0.5 percent) beer called tafel beer. And on a Sunday or for a special occasion we were permitted a bottle with a meal.

If you want an ordinary Belgian pilsner lager in Belgium you must ask for a pintje (pronounced piintcha). Stella is probably the most famous Belgian lager. It is relatively strong and some years ago in the UK was associated with aggression and binge drinking, earning itself the unfortunate popular name, wife beater. It was my introduction to intoxication. It used to be the practice in Belgium to never completely finish a beer and leave a small quantity at the bottom of a glass.  I’ve no idea why. Towards the end of a summer garden party, at the age of about twelve, I wandered around finishing off the remains of a considerable number of beers, with very unpleasant results.

I used to drink litres of Stella with my Belgian cousins when I was in my twenties. Great nights were had, but the headaches the next morning were shocking. Stella has cleaned up its act. Whatever caused the headaches has been banished and the brand image is much improved. Some other good Belgian pils lagers are Maes Pils, Cristal and Jupiler.

But I don’t drink much pils lager these days. I enjoy a stronger beer in smaller quantities – easier on the bladder. Most UK beers are brewed to an alcohol strength of 3 to 4 percent but in Belgium it’s not unusual to see beers with an alcohol percentage of 8 to 10. So the pleasures of mild intoxication can be reached without bloating yourself. And most importantly the flavours of these stronger beers are fabulous. Below are some of my all time favourites (so far, as there are over 220 breweries in Belgium and so many more beers to discover). 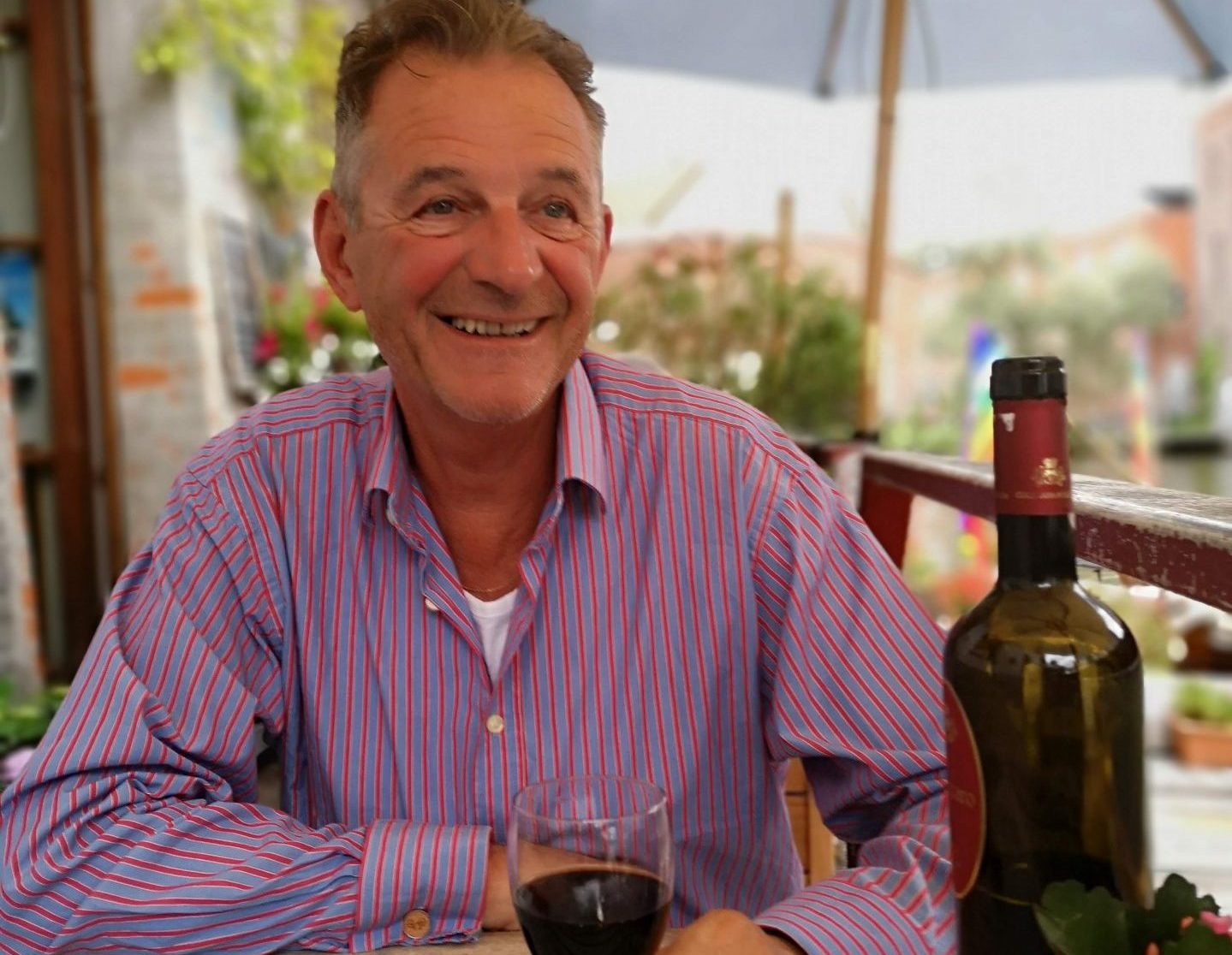 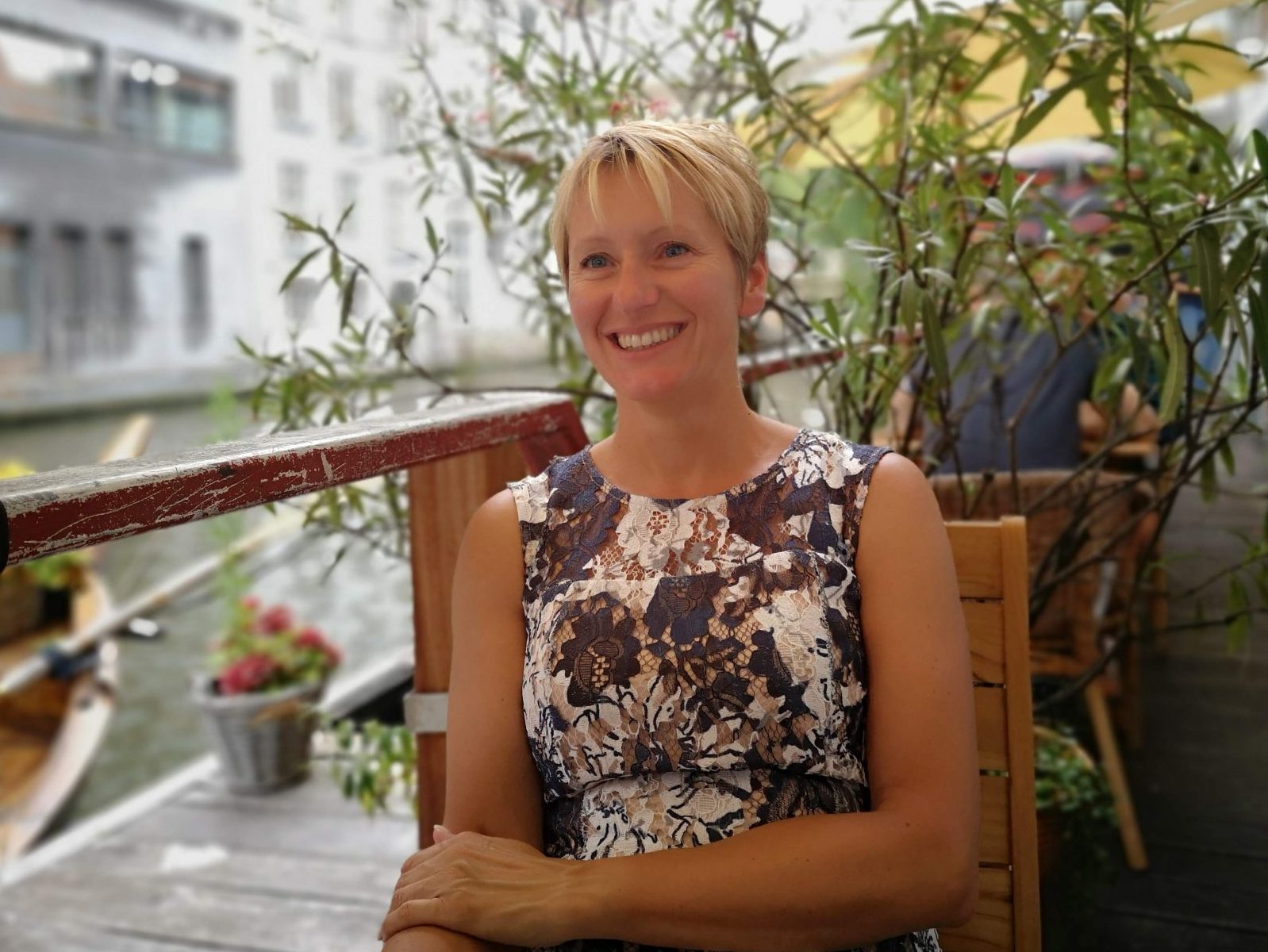 And sometimes it’s about a fine bottle of wine

Or its about Jo looking fabulous. What’s this got to do with beer? (Ed.)

A word about pouring Belgian beer. Firstly the beer must be cold.  Hold the glass at a 45 degree angle and pour slowly. Alter the angle of the glass and the rate of pouring to get a perfect foamy head on the beer. Practice a lot!

And beer glasses: Every beer has its own glass, usually with the brand emblazoned on it and with its own distinctive shape (goblets, chalices, flutes, tulips, even hourglasses in wooden frames). And I know its weird but the beer doesn’t quite taste right in the wrong glass. Imagine a good red wine in a half pint beer jug! 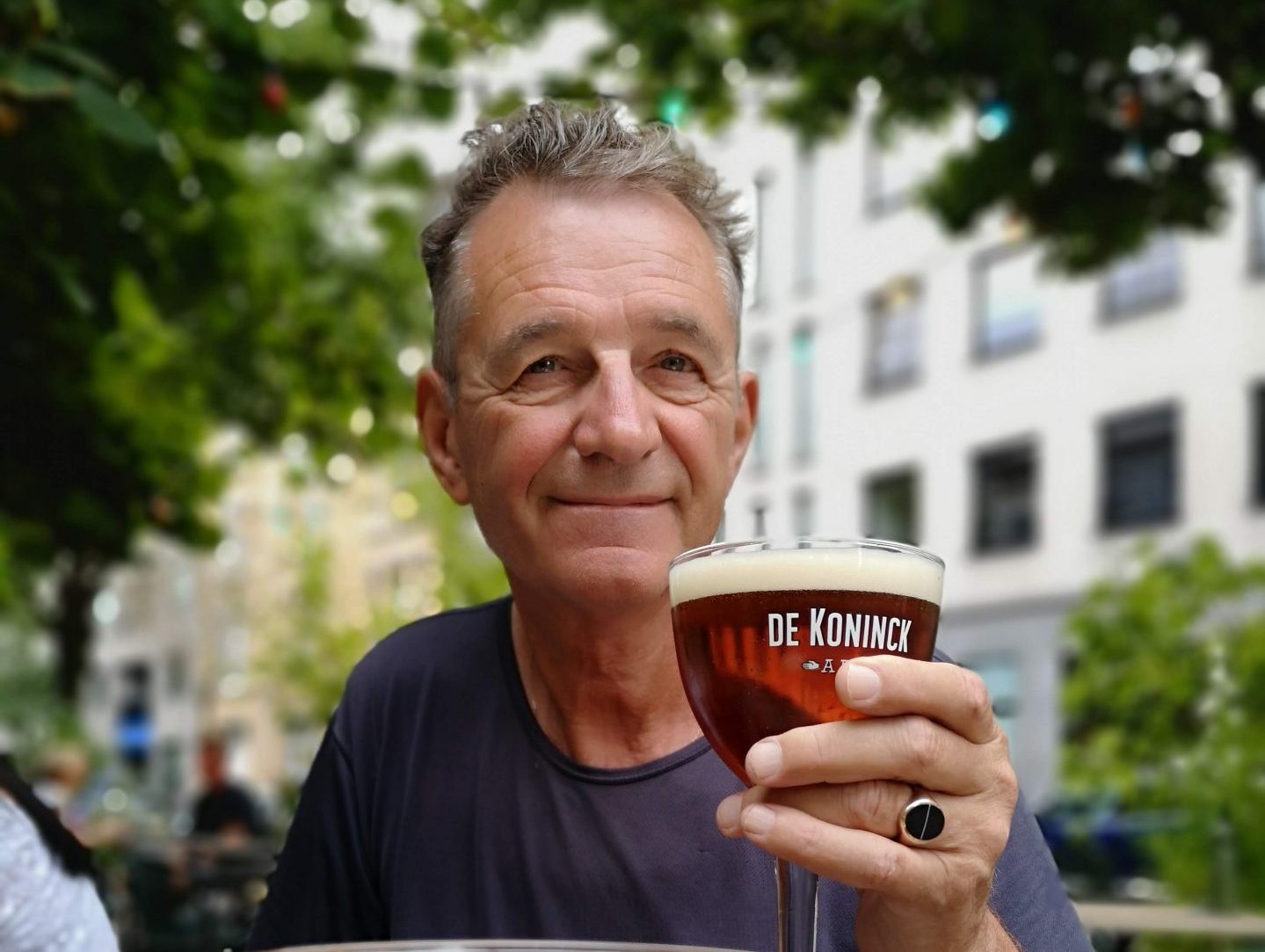 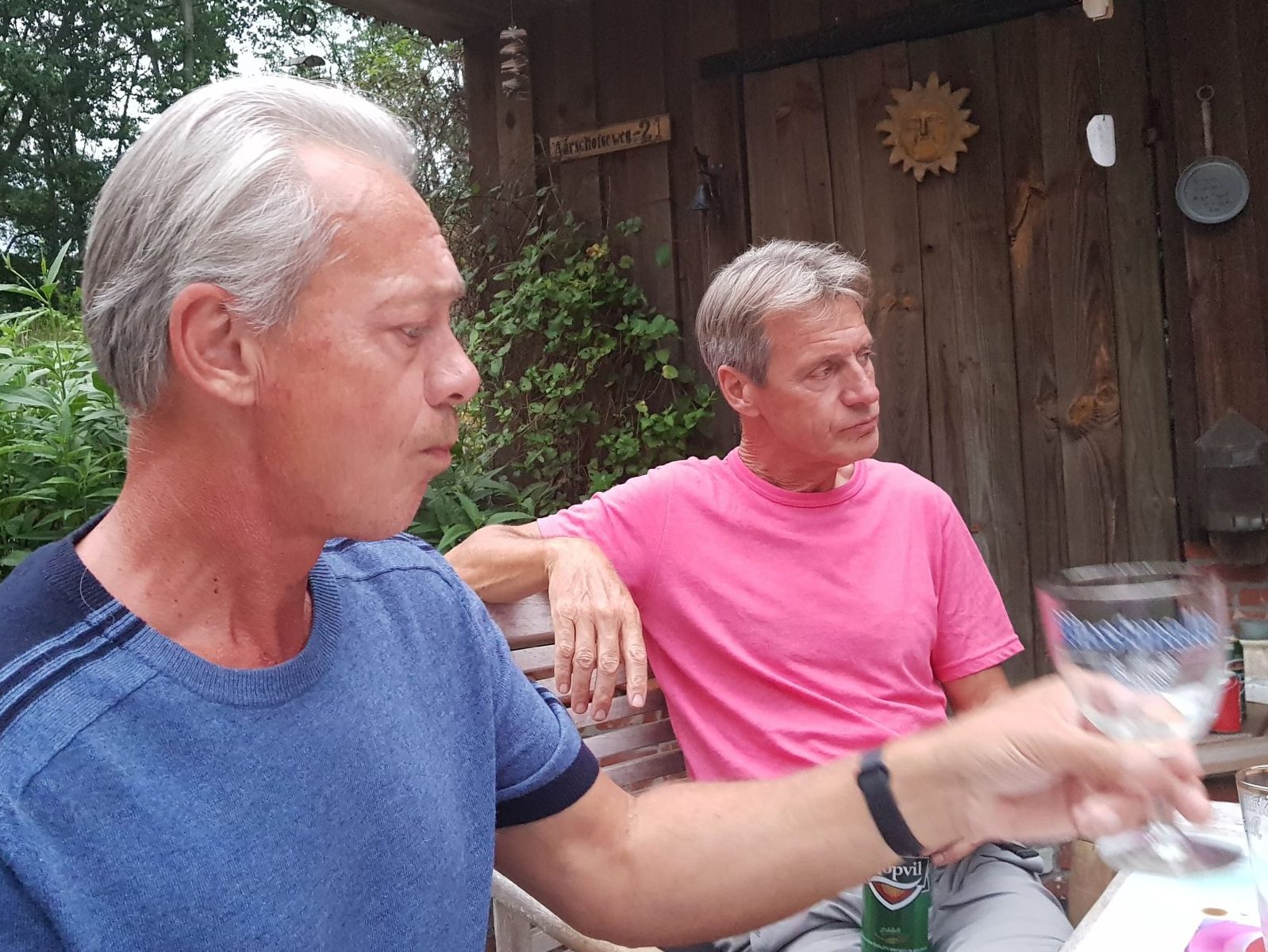 With a De Koninck in Antwerp

Dark (or brown) versus blond (light golden) beer. Blond and Brown beer have many similarities in the brewing process. The differences are mainly due to the raw materials, in particular  the type of barley malt. Pale barley malt is used for blond beer and dark barley malt for dark beer. I have a preference for the blond.

Dubbel (double) versus trippel (triple). Double, is typically a dark amber or brown beer with an alcohol strength of 6 to 8 percent. Triple, a golden brew ranging from 8 to 10 percent. There is a more uncommon quad which is off the scale.

Trappist beer is brewed by Trappist monks. There are six Trappist monasteries in Belgium. The Trappist order was inspired by a monk called Armand in 1664. They don’t encourage idle chatter and they’re vegetarians who occasionally eat fish. Trappist beers contain residual sugars and living yeast and, unlike conventional beers, will improve with age. The trappist Westvleteren 12 is often considered to be the best beer in the world.

Lambic or geuze beers. Lambic is a traditional Belgian style of sour beer (although the sourness can be alleviated if the beer is brewed with fruit such as cherries, raspberries, apples). After boiling the wort, made from pale malt and 30–40% unmalted wheat, the brewers expose it to wild airborne yeast and bacteria overnight. Geuze is a blend of Lambics traditionally served in champagne bottles and it ain’t cheap! They are often cloudy due to yeast in the bottle. Drink it all, it’s good for you. I’m not a big fan of the fruity varieties.

Now for a short list of some of my favourites. There aren’t any dark chocolate toffee flavoured  beers on here as they’re not to my taste. For an exhaustive list of Belgian beers check out Eupedia Belgian Beers Many if not all of these beers are available on tap  (van’t vat). That’s the best way to drink it if you are lucky enough to get it.

Westmalle tripel. 9.5% A golden trappist from the Westmalle monastery. Spicy, with just a hint of yeast. Fans use words like elegant and refined to describe it. One is never sufficient. Any Trappist tripel is fabulous.

La Chouffe.  8% An unfiltered blond beer which is re-fermented both in the bottle and in the keg. Very slightly fruity,  it’s spiced with coriander but it’s very subtle. You’d never guess the coriander.

Palm. 5.2% A top selling beer widely available on tap in Belgium. Not so strong on the alcohol front. Dark amber in colour with an off-white foam and slightly effervescent. Very drinkable. I like it.

Duvel. 8.5%. Pale in colour. Big frothy head. Pour and drink with care. Medium sweet which I don’t normally like. Emblazoned on the side of the Duvel brewery in Belgium are the words “Hier Rust Den Duvel” meaning “Here Brews The Devil” or “Here Rests The Devil”. It’s an intoxicating beer!

Brugse Zot 6% My daughter, Hannah’s favourite. Lots of people who experience this unfiltered beer from Bruges rave about it. Orange and hazy – low in carbonation.  All sorts of flavours lurking in it. Everybody senses something different. If you take a liking to Bier van Belgie you’ll love this.

Orval 6.2%. A dark amber trappist. Hoppy hoppy hoppy.Yes intensely hoppy. And hops is what UK beer drinkers love. Be happy with this hoppy.

Grimbergen blonde 6.7%. Pours pale golden with a head that doesn’t last. Medium bodied. Refreshing after a long cycle ride. Quite sweet. Enjoyable but probably wouldn’t drink more than one.

De Koninck 5.2% Ask for a bolleke in Belgium and this is what you’ll get. Antwerp in a bottle. Filtered and pasteurised in that fine city. So dark clear amber. A beer of which you can drink a few. A session beer!

Hoegaarden wit or wheat beer. 4.9%. A wheat beer flavoured with coriander and orange peel so sweet and sour all at the same time. Cloudy and crisp. Readily available in the UK. The is a Grand Cru version – darker, richer, twice the strength – which I really like.

Boon Oude Geuze 7%. I like this slightly sour citrusy Lambic beer which can be purchased at Waitrose. To moderate the sourness it is only brewed during the colder months of the year – October to April.

St Feuillien Triple 8.5% Jo is very fond of this one. Rich aroma. Very fruity and yeasty with aromatic hops and spices.

Leffe Blonde. 6.6% The best known Belgian beer (after Stella) in the UK. Well carbonated – it froths in the mouth. Quite sweet.

And of course it’s about the cycling.