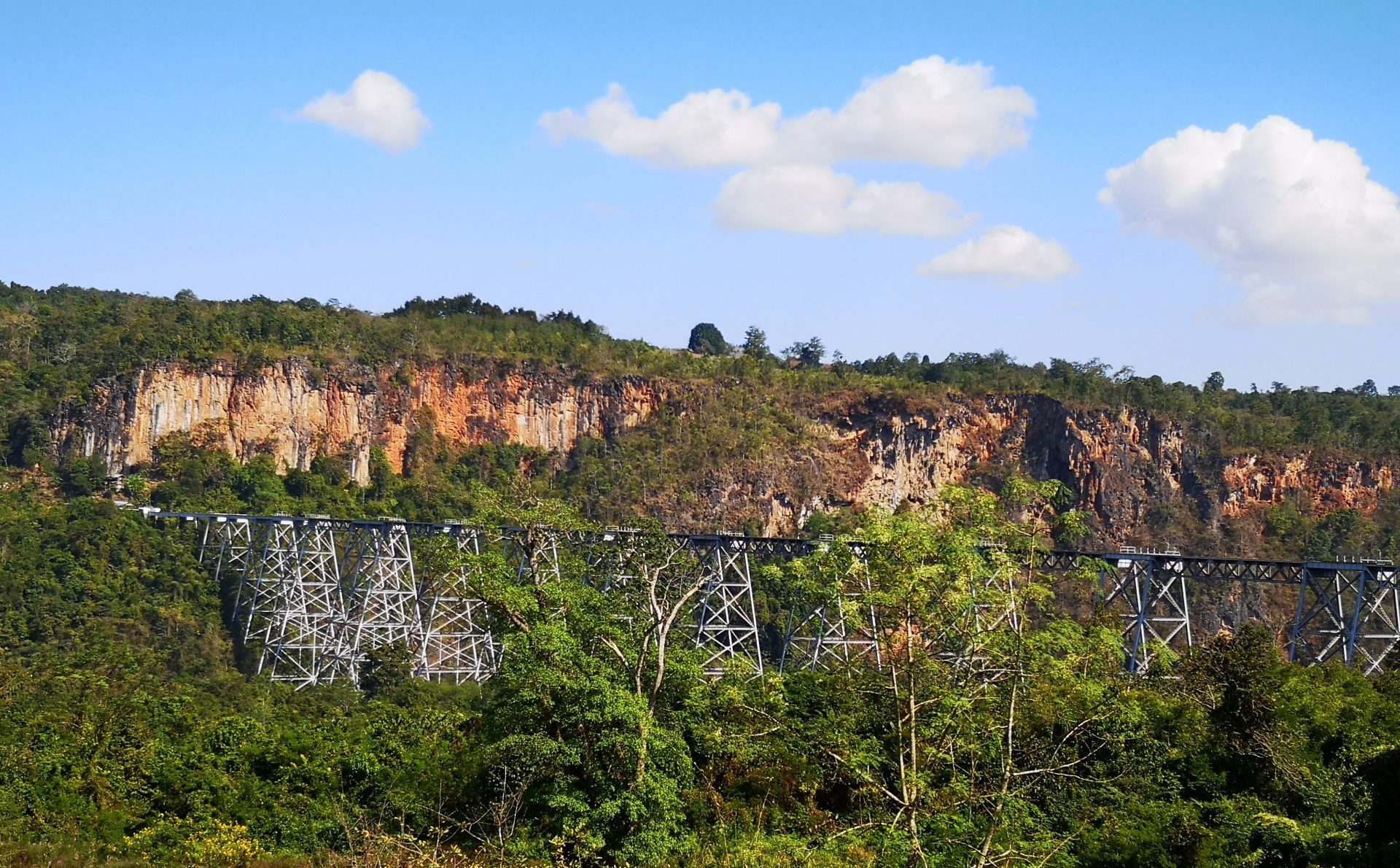 Ihave a thing about bridges.  I’ve often altered travel plans or made special journeys in order to view a noteworthy piece of engineering.  My kids have endured trips to industrial wastelands just to see “a fantastic gondola bridge”. My passion extends to viaducts and aqueducts.  It’s not a surprise then that the Mandalay to Lashio railway in North East Myanmar is on my radar. This narrow gauge railway crosses Myanmar’s highest bridge, the Gokteik viaduct.  Built in 1901 using US steel, the viaduct takes the track to 102m above the Dokhtawaddy River. 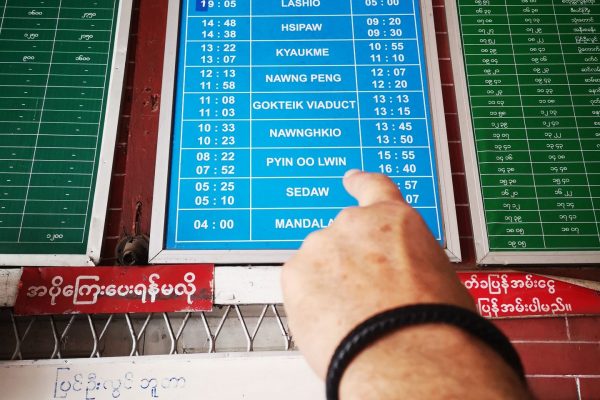 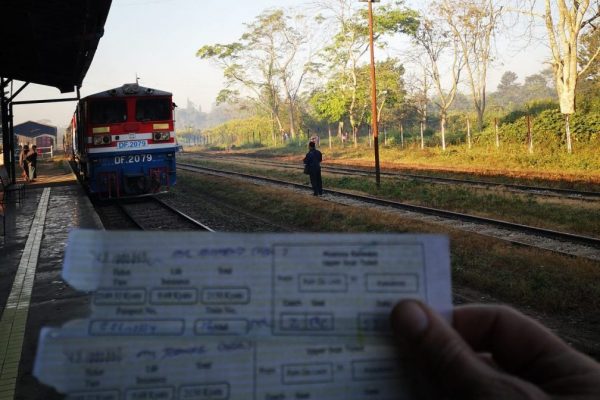 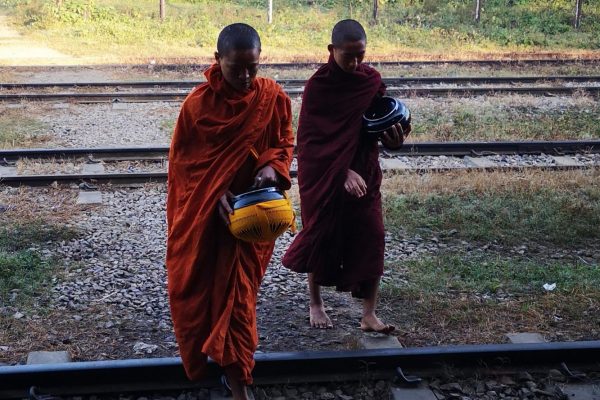 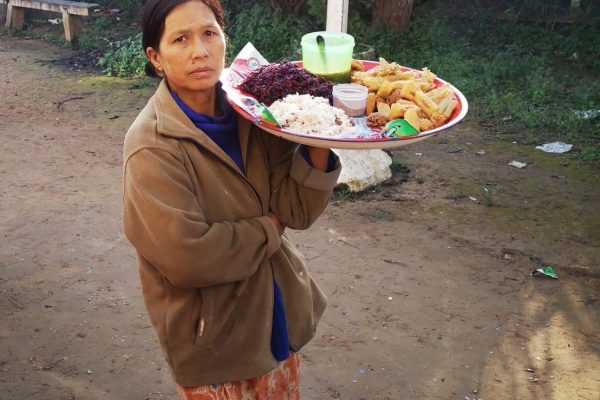 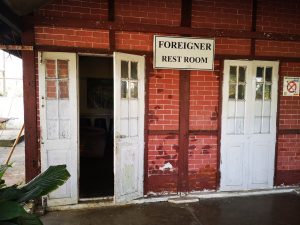 At the railway station, the brusque, officious ticket officer provides us with our tickets. The price for our five hour journey in ‘upper class’, we consider a bargain and we note that 3p of the £1.10 pp fare is for life insurance.  Take note, should this be our final blog. We’re glad that we purchased and booked our tickets yesterday, despite the procedure being rather vague and receiving no receipt – from the officer’s list there’s only three spare spaces left on the carriage. We’re happy that we spent ‘the extra’ and didn’t go ‘ordinary class’ spying the hard seats in that carriage.  There’s a rest room ‘for foreigners’ on the platform. It’s filthy and I’m sprayed from the broken and open cistern. The lid is missing.

The diesel engine is uncoupled. Two extra carriages are added to the train. We take our places, seats B6 and C6 and our suitcases fit above us in the racks. There’s more leg space than we have on our flights. Comfortable and wide seats they are blue with a pink swirling pattern. Red, unswept lino floor, wood effect and jade green trim complete the decor. Open windows. There could be air conditioning of sorts in the form of ceiling fans, but judging from the cobwebs, they haven’t worked in years.  It’s dirty. Apart from the seats and perhaps the floor, the interior has never had a wipe over.

The train’s on time. It’s 0820am and we’re off to Kyaukme, pronounced, ‘Choc May’.  At the time of writing, it’s about as far as we can go towards the Chinese border. We want to continue to the end of the line, Lashio, but due to recent fighting (attacks in August), between the military junta and the Northern Alliance, a group of insurgent armies, continuing to Lashio would break our ‘London to Brighton rule’ – the minimum distance that we consider reasonable, between us and any reported troubles. 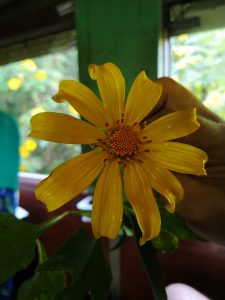 Immediately, we are travelling tightly between tall hedges of yellow daisy like flowers.  In flower during November and December, they grow like a weed in profusion and are locally referred to as ‘wild sunflowers’.  Only disturbed twice a day by the train, they encroach through the open windows and we are dusted lightly with dew, yellow petals and leaves.  The vista opens up and there’s fertile farmland and crops of tomatoes, greens, and rice.  Bananas grow by the trackside. The earth is darker here than in the Kalaw/Inle region.  We pass a few villages with houses of wood and bamboo walls and corrugated iron roofs.

There’s no station, but the train slows and a passenger alights.

We sway, we jolt, we pick up speed. Possibly 30mph. 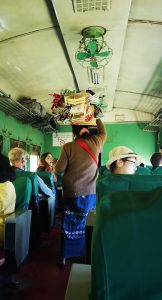 Occasionally, the buffet service appears. A woman wearing the commonplace thanaka face paint, carries refreshments on a tray on her head. A man with a similarly painted face has a bucket of canned drinks.

We’re sprayed with dust and more leaves like confetti. The odd ant joins me on my seat.

At every junction the points are changed manually. We stop. We hear the clang clang of metal being hit. A green flag is waved. We continue. We sway quite ferociously again as we pick up speed.

A long deep horn is blown at every road crossing.  We see one manually operated level crossing over a major road, the guard in uniform waving a red flag.

The clackety clack noise and motion of the train has a hypnotic effect. It’s a relaxing journey.  We make a short stop at the amusingly named Wet Wun station. It’s a pretty, sleepy, dry, little place.

We’re climbing. There’s a deep cutting covered with ferns. We’re enclosed. The train’s only a couple of inches from the rockface. 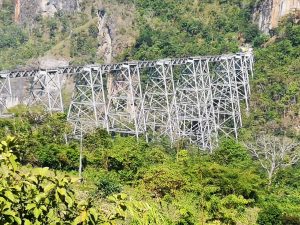 Tree covered hills now.  Clouds hang in a valley. And all of a sudden, there it is.  A tall, steel, trestle structure rising from the valley floor, the Gokteik Viaduct.  Tourists charge to take a shot of it, but there is no need to rush.  The train winds its way down to the viaduct in a series of snaking bends, producing plenty of opportunity to view both its sides, from both sides of the carriage.  It’s 11am and the train stops briefly at Gokteik railway station before slowly crawling its way across the viaduct, its brakes screech all the way.  Leaning out of the windows down and across the deep cut green valley, thick with trees, it is clear that this viaduct is indeed a feat of engineering.

The train continues through dense vegetation obscuring views. I am amused by the company of two mice who race each other across the carriage.  I think they’re living in one of the seats. It’s a game of hide and seek as I try to guess where they will dart from next.

The earth turning ochre again, there’s more farmland and what look like gigantic haystacks, but they’re ricestacks.   The farmers are seeking shade from the midday sun under corrugated iron roofed shelters. The five hours pass quickly.  The train has run like clockwork despite its reputation for tardiness. It’s 1310pm. We arrive at Kyaukme too soon. It’s been such a pleasure. Perhaps, we should have made the ten hour trip directly from Mandalay after all.

Kyaukme is in the Northern Shan State.  It looks like a frontier town with only one tired hotel and one shabby hostel, it does not cater for tourists. There’s really nothing to do here.  Trekking is popular in Myanmar, and in Kalaw or Hsipaw groups of tourists often converge. Trekking from Kyaukme, we are hoping for a more remote experience.  We think our plan is coming together – we are the only foreigners to alight. 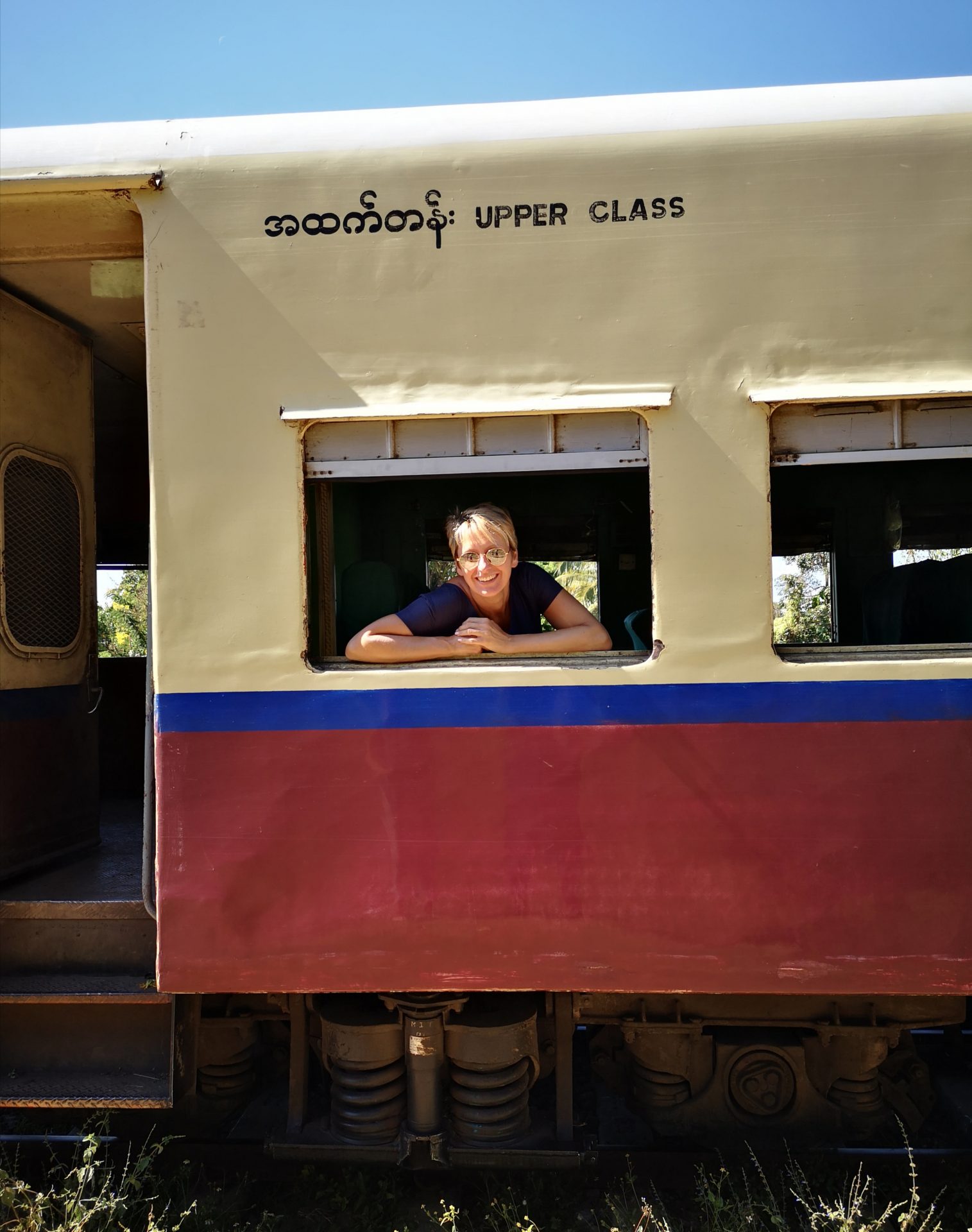 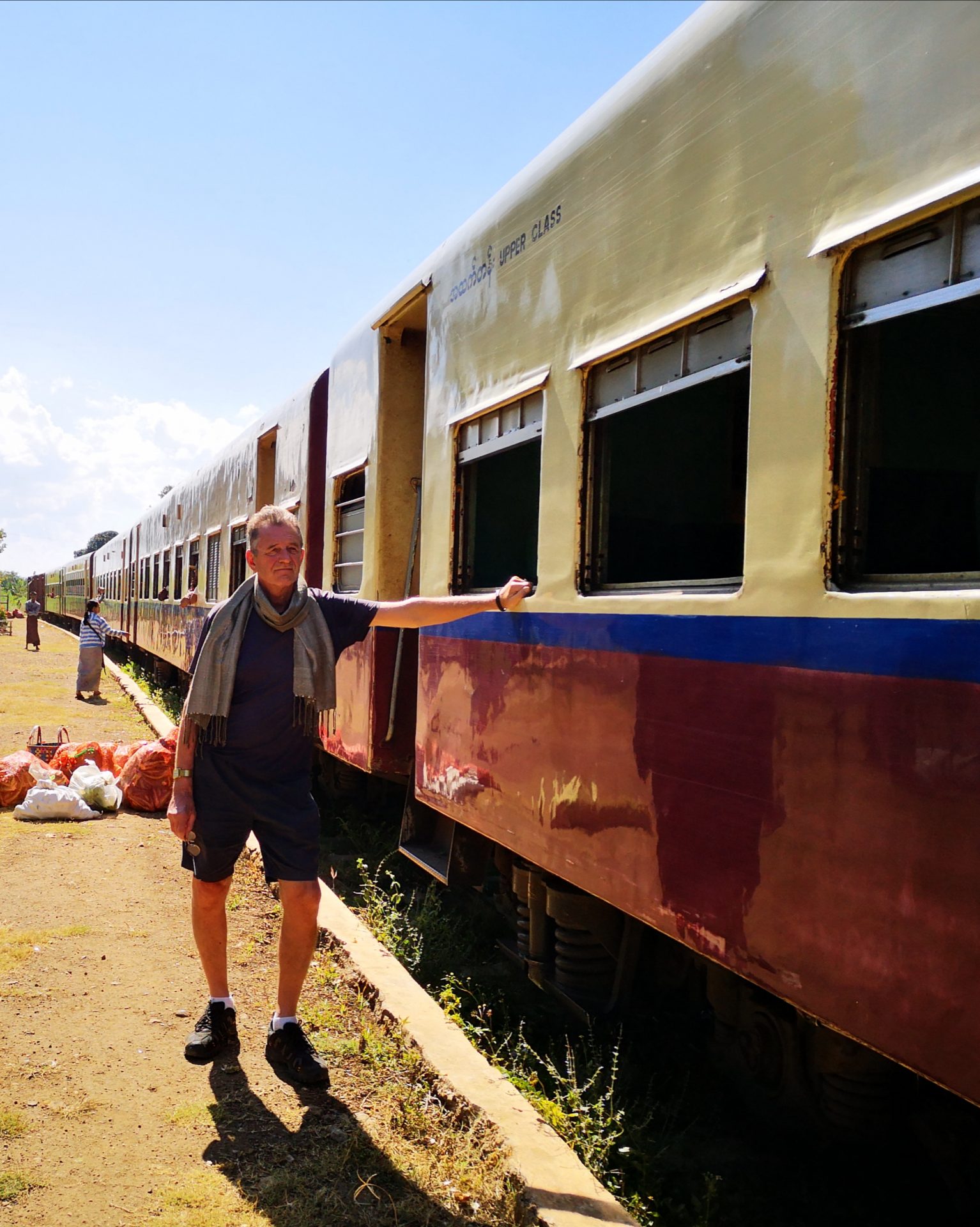